The Cardinals interviewed Tom Clements for their offensive coordinator post but will be bringing him aboard with a different title.

Arizona will add Clements as its quarterbacks coach and passing-game coordinator, Tom Pelissero of NFL.com reports (on Twitter). At this point, the Cardinals are not expected to fill the position of offensive coordinator, Ian Rapoport of NFL.com tweets. 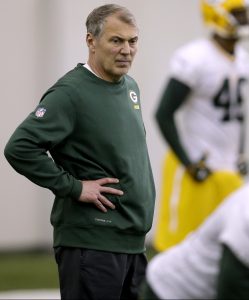 Kliff Kingsbury is essentially going to serve in that role, with the 65-year-old Clements now set to play a key part in assisting the first-time NFL coach. The plan will be for Kingsbury to call plays but Clements to assist him in game plans and other facets, per the Arizona Republic’s Bob McManaman. Clements’ primary role will be developing Josh Rosen.

Should the Cardinals go without an OC, it will mark an interesting conclusion to a lengthy process. The franchise interviewed four coaches — Clements, Jim Bob Cooter, Hue Jackson and John DeFilippo — for the role and sought meetings with other coaches that did not end up taking place. The Cards were initially connected to an all-college group, with Texas State HC Jake Spavital mentioned as a candidate. The team also wanted to interview 49ers assistant Mike McDaniel and former Falcons OC Steve Sarkisian. Neither came to pass, and the search moved on to names like Cooter, Clements, DeFilippo and Jackson this week.

Clements, 65, has coached at the NFL level since 1997. He served as an OC or assistant head coach with the Packers and Bills, the latter from 2004-05 and the former from 2012-16. Clements has not coached in the league since his 11-season Packers tenure ended. Prior to ascending to Green Bay’s OC role, Clements coached Brett Favre and Aaron Rodgers as QBs coach for six seasons.

This will be the sixth franchise with which Clements has been employed.

The Cardinals interviewed longtime NFL assistant Tom Clements for their OC job on Tuesday, sources tell Tom Pelissero of NFL.com (on Twitter). The Cardinals have cast a fairly wide net in their search already, but Clements could conceivably get the nod over the rest of the pack. 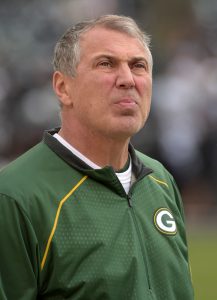 Clements’ only experience as an offensive coordinator came in 2004-2005 with the Bills. However, he has coached a handful of Pro Bowl QBs, including Packers star Aaron Rodgers, so he could present himself as a strong choice to guide youngster Josh Rosen in Arizona. Even if Clements doesn’t get the OC gig, he’ll be in strong consideration for another job on the staff, Ian Rapoport of NFL.com (on Twitter) hears.

The Cardinals also have former Lions OC Jim Bob Cooter and former Giants head coach Ben McAdoo in the mix. John DeFilippo interviewed for the job, but he has since been snatched up by the Jaguars. Kliff Kingsbury may also be eyeing Texas State head coach Jake Spavital for the position, but it’s not clear if he’ll get a formal interview or whether the Cardinals would be comfortable with an inexperienced 30-something OC.

The idea of Packers general manager Ted Thompson taking a lesser role has come up, but it doesn’t appear it’s going to happen this offseason. Thompson is “not going anywhere,” head coach Mike McCarthy told reporters, including Jason Wilde of ESPN Wisconsin, on Thursday (Twitter link). The 64-year-old Thompson, who McCarthy acknowledged is “not the youngest cat anymore,” has been the GM in Green Bay since 2005. The team has made nine playoff trips, including eight in a row, and won a Super Bowl during Thompson’s 12-year run.

In his end-of-season press conference, Mike McCarthy gave Eddie Lacy an ultimatum of sorts after the third-year running back endured his worst season.

“Eddie Lacy, he’s got a lot of work to do. His offseason last year was not good enough, and he never recovered from it,” McCarthy told media, including ESPN.com’s Jason Wilde. “He cannot play at the weight he was at this year.”

Lacy’s yardage total decreased considerably from two upper-echelon campaigns in 2013-14, with the former second-round pick rushing for 758 yards (4.1 per carry) on 187 totes — 59 fewer than last season and 97 fewer than his offensive rookie of the year slate.

2015 also brought three games where Lacy came off the bench, once as a result of missing curfew in Detroit and being outright demoted in favor of James Starks earlier.

Here are some more takeaways from the Packers coach’s presser.

Reports varied over the nature of the Ole Miss junior defensive lineman’s fall, with this tweet indicating the Atlanta police said Nkemdiche fell from a fourth-floor window. But according to Ching’s report, police indicated this was a one-story fall of approximately 15 feet.

Per Ching, Nkemdiche appeared to have broken the window, climbed over another wall before falling to the ground. A small amount of “suspected marijuana” was present inside the room.

Matt Miller of Bleacher Report projects Nkemdiche to go fourth in the 2016 draft, and Mel Kiper Jr. lists the former No. 1 overall recruit as his No. 5 prospect.

Here are some additional news items on draft prospects and other news from around the league.

Rob Dire contributed to this report.

7:20pm: The Packers have decided to shake up their offensive staff, elevating Clements to associate head coach and moving Bennett to replace him at offensive coordinator, Ian Rapoport of NFL.com reports.

The most notable change from this reshuffling: Clements will accept the play-calling reins from McCarthy. These increased roles could make it easier for Packers assistants to receive head-coaching interviews, Rapoport tweeted  Sunday after McCarthy questioned why his top staffers were never the “hot candidates,” in a January Rapoport account.

A former running back in Green Bay, Bennett coached the receivers the past four years after presiding over the running backs in the previous six seasons. The Packers have continued to produce top-flight receiving corps despite losses of key homegrown cogs Donald Driver (retirement), Greg Jennings (signed with the Vikings in 2013) and James Jones (UFA-Vikings in 2014).

Homegrown talents Jordy Nelson and Randall Cobb combined for 25 receiving scores this season, and both landed on Pro Bowl rosters.

4:36 pm: The Packers 2014 season was a successful one by most standards, as the club won 12 games and finished first in the NFC North. A devastating loss to the Seahawks in the NFC Championship game looms over Green Bay, however, and the team is now reportedly considering changes to its coaching staff. Sources tell Rob Demovsky of ESPN.com that head coach Mike McCarthy is “looking at different possibilities” with regards to altering his staff’s responsibilities, with once such scenario entailing him relinquishing play-calling duties.

Radio station 104.5 The Fan in Green Bay reported (Twitter link) that offensive coordinator Tom Clements is set to be promoted to associate head coach and will be handed the job of calling plays, while current receivers coach Edgar Bennett would shift to OC. Demovsky couldn’t confirm that exact structural change, and added that nothing has been finalized yet. Still, sources tell the ESPN scribe that McCarthy has privately noted the difficulty of managing the day-to-day operations of the team while also tending to play-calling, so the staff changes shouldn’t come as a surprise.

McCarthy, the Packers’ HC since 2006, has called the offensive plays for the duration of his reign in Green Bay. The offensive unit has been consistently above-average, finishing no lower than 11th in DVOA since 2007, including two No. 1 finishes (2011 and 2014). Clements has been on the Packers’ coaching staff since 2006, as well, acting as the QB coach from ’06-’12, then taking over as OC in 2013 following the departure of Joe Philbin. He was the play-caller for the Bills from 2004-05.

The Browns‘ search for an offensive coordinator appears to have been one of the league’s more expansive hunts so far, with nearly a dozen candidates linked to the position at some point, though many have since found other jobs. Still, perhaps no name among Cleveland’s candidates is more surprising than the one Ian Rapoport of NFL.com tweets today. According to Rapoport, former Rams head coach Mike Martz recently interviewed with the Browns for their OC job. A source tells Alex Marvez of Fox Sports (Twitter link) that Martz is indeed interested in returning to coaching after essentially being retired since leaving the Bears after the 2011 season.

Here’s more on the Browns and a few other teams from out of the NFL’s two North divisions: