Free agent fullback Will Johnson recently met with the Falcons and Jets, according to Jordan Raanan of ESPN.com. 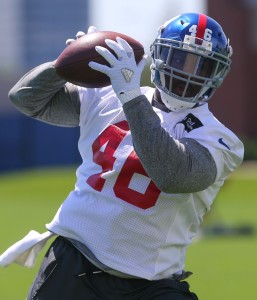 Johnson, 27, was released by the Giants earlier this month, although he suggested he could end up re-signing with Big Blue on a cheaper deal. After spending four seasons in Pittsburgh (and appearing in 63 games during that period), Johnson missed the entirety of the 2016 campaign after suffering nerve damage in his deltoid muscle.

Atlanta signed two fullbacks — including veteran Derrick Coleman — earlier this week, but that shouldn’t stop the club from taking a look at Johnson. Last season, the Falcons deployed a fullback with regularity, as Patrick DiMarco played 324 offensive snaps, third among all NFL fullbacks. DiMarco has since signed with the Bills, leaving a void in Atlanta’s offense.

The Jets were on the other end of the spectrum in terms of fullback use: Julian Howsare lead all Gang Green fullbacks with a whopping three offensive snaps. Former offensive coordinator Chan Gailey didn’t utilize the fullback in his scheme, but new play-caller John Morton may want to, as the Saints (Morton’s former employer) used a fullback on roughly a quarter of their plays. New York doesn’t currently have a fullback on its roster.

Giants To Release Will Johnson

The Giants are releasing Will Johnson, the fullback told Dan Duggan of NJ.com. However, the 28-year-old said he could return to the organization on a minimum-salary deal. Johnson had one-year remaining on the two-year, $2.3MM deal he signed last offseason. As Duggan notes, the move will save the Giants about $1MM.

Jordan Raanan of ESPN.com (Twitter link) confirmed the news, adding that a return is possible but he will first explore the market. The move will save $610K against the cap.

The team inked tight end/fullback Rhett Ellison earlier this week, and it was apparent that the team would likely move on from Johnson, who would theoretically play a similar role in the G-Men offense. The fullback didn’t take the field in 2016 as he recovered from “slight nerve damage to the deltoid muscle.” Prior to that, Johnson played four seasons with the Steelers, where he only missed a single game.

Johnson has eight career carries for 14 yards and one touchdown. He’s hauled in another 31 receptions for 235 yards and two scores.

“I’d like to come back, but I know they just signed a guy who basically does the same thing I do, so I don’t know if they even want me back,” Johnson said. “They’re aware that I can sign elsewhere. I plan to shop around. There’s not much of a market for me coming off (injured reserve) for a season. So, we’ll see how things turn out.”

Aaron Wilson of the Houston Chronicle has several details on a handful of the latest contracts to be agreed upon or signed from around the NFL. Let’s dive in and check out the specifics….

The Dolphins will watch the playoffs from their couches for the seventh straight season largely because they’ve cycled through various underwhelming choices at head coach and quarterback during that span. Armando Salguero of the Miami Herald offers a solution for each spot: Sean Payton and Drew Brees.

Both Payton and Brees are still under contract in New Orleans beyond this season (Payton for two years, Brees for one), but there are rumblings that Payton will search for another job during the offseason. Thus, he could end up in Miami – which isn’t expected to promote interim head coach Dan Campbell. Should Payton attempt to take a position elsewhere, the Saints will expect compensation for him. If the Dolphins ends up as Payton’s next team, Salguero believes they should be willing to package as much as a first-round pick in 2016, a first-rounder in ’17, and quarterback Ryan Tannehill to ensure that the Saints put Brees in the deal with Payton.

Salguero’s proposal would make sense for the Saints, who are in cap jail and nowhere near contention. They’d get Tannehill – who has shown potential, is nine years younger than Brees (37 in January), and under team control through 2020 – and a couple of valuable draft choices to aid in a rebuild. The Dolphins would be surrendering a boatload in hopes of ending their playoff drought, but Salguero thinks owner Stephen Ross would be a proponent of such a move because Ross has tried something similar in the past. As Salguero details, Ross attempted to hire then-Stanford head coach Jim Harbaugh in 2011 and wanted Harbaugh to convince his QB, Andrew Luck, to enter the draft. It didn’t work then, but Salguero sees his idea as a win-win for both Ross’ Dolphins and the Saints.

In the event Salguero’s suggestion becomes a reality, it would mean Brees finally ends up in a Dolphins uniform – something that nearly happened almost a decade ago. Instead the team traded for Daunte Culpepper, whose time in Miami was a failure. On the other hand, Brees became a Super Bowl winner and a Hall of Fame lock in New Orleans.

Addressing a report that suggested he left several members of the Bills‘ front office and coaching staff out of the loop when he decided to cut Fred Jackson, general manager Doug Whaley said on Thursday night that he consulted several others before making the move official, writes Tyler Dunne of The Buffalo News. According to Whaley, head coach Rex Ryan was with him when he informed Jackson of the decision.

“So he was in there with me when we told him together,” Whaley said. “Talked to the running backs coach (Anthony Lynn). So it wasn’t just me waking up one day and deciding, ‘Hey, I want to do this.'”

Whaley added multiple times that he informed Bills ownership of the move, which the original report didn’t dispute. For his part, Jackson suggested Whaley was behind the decision, adding that the GM “wasn’t honest with me the entire time that I’ve known him.”