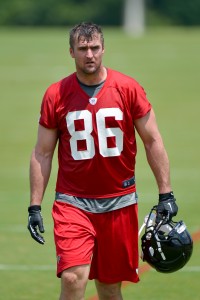 [RELATED: Why The Patriots Could Try To Claim RB Karlos Williams]

Pascoe, 30, spent five seasons with the Giants before joining the Falcons in 2014. Last year, Pascoe was out of the NFL until he hooked on with the Lions in December on 2015. A sixth-round pick of the 49ers in 2009, Pascoe has totaled 40 receptions and two touchdowns in the NFL.

The Patriots already seem to have a full group at tight end with Rob Gronkowski, Martellus Bennett, A.J. Derby, and Clay Harbor. In recent weeks, Derby seems to have leapfrogged Harbor and he may join Pascoe in free agency soon.

The Lions released former starting right tackle LaAdrian Waddle on Tuesday, as Dave Birkett of the Detroit Free Press writes. In a related move, the Lions have claimed center Gabe Ikard off waivers from the Browns.

Waddle, signed as a UDFA in 2013, found his way into the Lions’ starting lineup thanks to his own solid play and injuries around him. However, he has struggled with injuries the last two years, including a season-ending ACL injury in 2014. This year, he was bumped from the starting lineup in favor of Michael Ola.

Ikard will add some competition to the center position just after the team’s comeback bid against the Rams was blown on a botched snap. Travis Swanson has started 12 of 13 games at center for the Lions this year with mixed results, so he has now been put on notice.

Meanwhile, Lions have formally placed Brandon Pettigrew on injured reserve while signing a tight end to take his place on the 53-man roster, as Tim Twentyman of DetroitLions.com writes. The Lions signed veteran tight end Bear Pascoe after a recent workout in Allen Park. Pascoe, 29, spent five seasons with the Giants and was most recently with the Falcons in 2014. Pascoe has played in 82 career games with 34 starts and his blocking will be needed in Detroit for the remainder of the season. When it comes to pass catching tight ends, the Lions have that well covered between Tim Wright and youngster Eric Ebron.

As the Nov. 3 trade deadline nears, the Boston Globe’s Ben Volin examines some veterans floundering teams should be looking to deal.

Mentioning Steve Smith, Haloti Ngata, Anquan Boldin and Chad Henne among those who would generate value, Volin focused on some players who’d further strengthen the Patriots.

Chiefs cornerback Sean Smith‘s in a contract year and one of several of the team’s defensive stalwarts, such as Tamba Hali, Derrick Johnson and Eric Berry, under that circumstance.

Volin insists the Pats should “do whatever they can” to acquire Smith from Kansas City, pointing to the former Dolphin’s talent, the Pats’ penchant for coaxing strong play out of players deemed character risks and the Chiefs saving $2.25MM by moving Smith early. The 28-year-old corner missed three games this season due to a DUI-induced suspension.

The Buccaneers would also make a convenient trading partner for the Pats, and Volin notes Logan Mankins — who the team traded away for since-jettisoned Tim Wright last year — has only $3.5MM remaining on his deal for the rest of this season and would help repair the team’s injury-plagued offensive front.

Here are some more items from New England:

The Jets–Patriots rivalry may have hit a new high (or perhaps, low) as Jeff Howe of the Boston Herald reports that NFL officials swept New York’s locker room and questioned three New England employees during Sunday’s game — all at the behest of the Jets. A source tells Howe that the Jets were concerned that Gillette Stadium’s operations and radio frequencies were not up to par (for the record, the Jets have denied making any such requests).

Nevertheless, per Howe, the three Pats employees were interrogated throughout the third quarter, forced to hand over their phones and radios, and required to submit to a photograph. According to Howe, the Patriots were informed that none of the checks revealed anything improper, and that the club had done nothing wrong.

Let’s take a look at more out the AFC East, including fallout from last night’s contest…

The Eagles, who parted ways with the polarizing Tim Tebow last week, auditioned a pair of quarterbacks on Tuesday, according to ESPN.com’s Field Yates (on Twitter). Josh Johnson and Thad Lewis, who were both let go by their respective teams on September 5th, both worked out for Chip Kelly & Co. Johnson, 29, made an appearance during the Jets’ final preseason game, passing for 82 yards while adding 76 yards on the ground. Lewis, a 27-year-old signal caller recently released by the Browns, didn’t appear in a game with the Texans in 2014, but he did start in five games for the Bills in 2013.

Here are the latest auditions from around the NFL..

The Bears are moving on from tight end Dante Rosario after two seasons, according to the Chicago Tribune’s Brad Briggs, who reports they’ll terminate his contract (via Twitter). They’re also parting with fellow tight end Bear Pascoe, Briggs writes.

Rosario, 30, was the second tight end on Chicago’s depth chart last season, behind Martellus Bennett. The former fifth-round pick caught 16 balls for 116 yards, but primarily served as a blocker during his 323 offensive snaps. Although his Pro Football Focus grades weren’t spectacular in 2014, Rosario has traditionally been a very solid run blocker.

The eight-year veteran has appeared in 120 games for four different teams, hauling in 116 passes and eight touchdowns.

Pascoe signed a one-year contract with the Bears this past offseason after spending 2014 in Atlanta, where he caught just two passes (one TD) in a blocking role for the Falcons. Prior to that, the 29-year-old was a Giant for five seasons. He was a sixth-round pick of the 49ers in 2009 and has totaled 40 receptions and two touchdowns in the NFL.

Bear is officially a Bear — according to the Chicago Bears (via Twitter), the team has signed free agent tight end Bear Pascoe to a one-year contract.

Pascoe, who turned 29 earlier in the offseason, spent five seasons with the Giants to start his NFL career before playing for the Falcons in 2014. Although he primarily serves as a blocker, Pascoe has totaled 40 receptions for 336 yards and two touchdowns in his career. He caught just two passes last year in 148 offensive snaps for Atlanta, though one went for a TD.