The Cardinals have signed defensive tackle Clinton McDonald, according to a tweet from his agents. McDonald should help provide depth on the defensive line as the club prepares for a switch back to a 3-4 scheme.

The Cardinals already added defensive tackle help with their trade for Bruce Hector, but they’re leaving no stone unturned, especially after cutting former first-round pick Robert Nkemdiche. The well-traveled McDonald, who spent time with the Seahawks, Bengals, Buccaneers, and Broncos before joining the Raiders last year, could fit the bill.

McDonald is perhaps best known for his work with the Seahawks in 2013 in their lead-up to the Super Bowl. In that season, McDonald compiled 35 tackles and 5.5 sacks.

Clinton McDonald isn’t looking to hang up his cleats just yet. The veteran defensive tackle worked out for the Cardinals today, reports ESPN’s Adam Schefter (via Twitter). However, the two sides “could not agree to terms.” Schefter notes that the 32-year-old wants to continue playing. 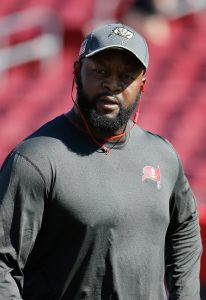 The 2009 seventh-rounder spent the first two years of his career with the Bengals organization before getting traded to Seattle in 2011. He developed into a reliable rotation lineman for the Seahawks, and he compiled 35 tackles and 5.5 sacks during the team’s 2013 run to the Super Bowl.

The Cardinals have moved on from a handful of defensive lineman over the past few months. Former first-rounder Robert Nkemdiche and free-agent addition Darius Philon were both released following their respective arrests.

When Jets owner Woody Johnson accepted the role as ambassador to the U.K., he left the team under the leadership of his brother Christopher. Given the relative success and cultural improvements the organization has seen under Christopher’s watch, there’s been a lot of speculation about what will happen when Woody returns from his political appointment.

Christopher himself is being quite open about the fact that he wants to stay on with the Jets, saying “no question, I’m hoping to have a larger role” even after his brother returns according to Manish Mehta of the New York Daily News (Twitter link). He added that he thinks Woody will be receptive to it, saying “I think he’d welcome that. I know that he would. I think that I have a new perspective at this point that would be valuable for the franchise.” Whatever happens, it’ll be interesting to watch it unfold as Christopher is reportedly well liked by the players.

Add another 30-something to Jon Gruden‘s offseason haul. Clinton McDonald will join the Raiders, Ian Rapoport of NFL.com reports (on Twitter). 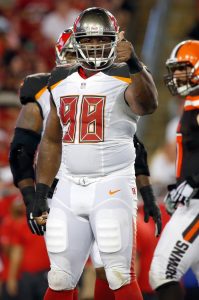 Cut by the Broncos after the preseason, McDonald appeared on the Raiders’ radar Wednesday. Despite the team visiting with 26-year-old Johnathan Hankins, one of the NFL’s top interior defenders in 2017, they’ll go with the 31-year-old McDonald for the time being.

A Hankins addition may not be off the table, but McDonald will attempt to fill the void created by Justin Ellis‘ foot injury. McDonald has served as a starter for two seasons, with the 2016 Buccaneers and NFC champion Seahawks in 2014, but has mostly been a backup contributor. He recorded five sacks for the Bucs last season, despite starting only three games. McDonald’s posted three five-plus-sack seasons, the other two coming with both recent NFC champion Seattle teams.

In addition to Ellis having strained multiple foot ligaments, rookie interior defender P.J. Hall was wearing a walking boot at Wednesday’s practice, per Paul Gutierrez of ESPN.com (Twitter link). He suffered an injury during the first series of the Raiders’ loss to the Rams.

McDonald signed a two-year, $7MM deal with Denver but restructured it because of an injury he was recovering from at the time. By converting $3MM in salary into per-game bonuses, McDonald did not receive any guaranteed money. It won’t cost the Broncos anything in dead money to part with the veteran defender.

Denver has slowly built some depth on its defensive line, with players like Shelby Harris and Zach Kerr in line to see time as second-stringers ahead of McDonald. The 31-year-old interior defender started for the 2014 NFC champion Seahawks and 2016 Buccaneers but otherwise has mostly functioned as an NFL reserve.

The Raiders, who have signed an NFL-high number of players in their 30s this offseason, were previously interested in McDonald, Mike Klis of 9News notes (on Twitter).

Could the Raiders conceivably trade Khalil Mack? Paul Gutierrez of ESPN.com feels that they would be wise to listen if another team blows them away with an offer of, say, two first-round picks for the 2016 Defensive Player of the Year.

Within the blurb, Gutierrez also references an exchange in March with GM Reggie McKenzie in which he asked (perhaps jokingly) if the writer had an extra $100MM on hand to help pay Mack. That may be an indication that the Raiders do not have the cash necessary to make Mack one of the highest-paid non-quarterbacks in the NFL, though there is no direct evidence of financial trouble in Oakland at this time.