After the Patriots got done smoking the Jets, they took a look at one of their former running backs. On Friday, the Jets auditioned running back Elijah McGuire, as Aaron Wilson of the Houston Chronicle tweets. 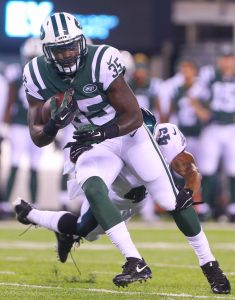 McGuire spent the last couple of seasons with the Jets, up until his recent release. The tailback drew solid reviews in Jets practice over the last two years, but his career 3.3 yards per carry average isn’t much to write home about.

Austin Walter, a Rice product, also showed his stuff for the Patriots. Walter recently auditioned for the Texans as well, so he may have an opportunity to stay in the great state of Texas.

If McGuire or Walter wind up with the Pats, they might get to make their New England debut against the Browns on Sunday. And, if they don’t, they might find a spot on the Patriots’ always-growing emergency list.

The Browns signed running back Elijah McGuire, as Ian Rapoport of NFL.com tweets. McGuire will provide roster depth as a fill-in for Dontrell Hilliard, who has been ruled out with a concussion for tonight’s game against the Jets.

Of course, while McGuire’s there, the Browns just might pump him for intel. McGuire spent the last couple of seasons with the Jets, up until his recent release.

The tailback drew solid reviews in Jets practice over the last two years, but his career 3.3 yards per carry average isn’t much to write home about. He’ll hope for an opportunity to break through in Cleveland, where he sits behind Nick Chubb and D’Ernest Johnson.

The Jets didn’t have a place for Elijah McGuire, but the Browns did. On Monday, the Browns filled out their taxi squad by signing the running back as well as tackle Paul Adams.

On Saturday, the Jets bumped McGuire and kept an RB group of Le’Veon Bell, Ty Montgomery, Bilal Powell, and Trenton Cannon. McGuire drew solid reviews in Jets practice over the last two years, but his career 3.3 yards per carry average isn’t much to write home about.

Here’s what the Browns’ filled out ten-man practice squad* looks like, as of this writing:

With less than 20 hours until teams must have 53-man rosters finalized, two franchises are seeking backfield help. Both the Texans and Jets are looking for running backs via trade, Aaron Wilson of the Houston Chronicle tweets.

The Texans may feature the league’s thinnest backfield, having lost three-year starter Lamar Miller for the season. They acquired Duke Johnson from the Browns, but the career passing-down back has maxed out at 104 carries in an NFL season — and that came in 2015. Last season, Johnson took just 40 handoffs in 16 games.

Houston has a host of rookies vying to make the final cut, along with special-teamer Taiwan Jones. No one besides Johnson on the Texans’ roster has carried the ball more than 20 times in a season, and it looks like this backfield will add an outside hire soon — either via trade or the waiver wire. The Texans cut Josh Ferguson on Friday.

Elijah McGuire did not make the Jets’ roster, but Gang Green still employs Le’Veon Bell, Ty Montgomery, Bilal Powell and Trenton Cannon. Their need does not look to be on the same level as the Texans’.