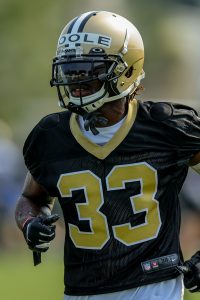 New Orleans gave Granderson, the Wyoming pass-rusher, a hefty sum of $85K guaranteed. Granderson is a talented player who almost certainly would’ve been drafted if not for his ongoing legal situation. Many analysts gave Granderson a mid-round grade, but he’s facing a July trial on sexual assault charges. Granderson has denied the charges, and it will be a situation worth monitoring this summer.

Greenidge also got significant guarantees, and the Saints could view him as a good longterm developmental option on the offensive line. Gustin was another player many thought had a chance to be drafted, and he was productive in college. In just six games at USC last season, he had 7.5 sacks. He’s struggled with injuries each of the past two seasons, but if he can stay healthy he should have a good shot at making the team.

The Saints sometimes struggled for consistent receiving options behind Michael Thomas last year, and Humphrey had 1,176 yards and nine touchdowns for Texas last season, so he could be worth a look.