The Jets inked former Broncos starter Trevor Siemian to a one-year, $2MM this offseason with the plan to use him as a backup to quarterback Sam Darnold. But as Connor Hughes of The Athletic writes, fellow signal-caller Davis Webb was more impressive during the spring. Webb, a Giants 2017 third-round pick that the Jets claimed off waivers last year, doesn’t have any NFL experience under his belt, while Siemian has started 24 pro games. Gang Green could potentially release Siemian, but they’d be saddled with $1MM in dead money. An alternative, per Hughes, could involve trading Webb for a mid-round pick, although it’s unclear if another club would sacrifice any real draft capital in exchange for an unproven quarterback.

Frank Gore Not Yet Considering Retirement

Frank Gore, 36, has the fourth-most rushing yards in league history (14,748), and he could surpass the legendary Barry Sanders for third place on the all-time list this season. But while he continues to defy the odds for running backs, Gore said he is not yet contemplating retirement. 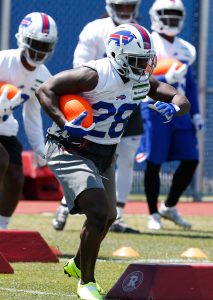 Gore, via David Furones of the South Florida Sun-Sentinel, said, “I just go how I feel. If I feel I can’t do it no more, then I call it.”

Oftentimes, players in the latter stages of their career proclaim that a given year will be their last in the league, even if they end up backtracking later. Gore, though, will apparently keep the legs churning until he feels his body can’t take it anymore.

And for good reason. Last year, in his one and only season with his hometown Dolphins, Gore managed 4.6 yards per carry off of 156 attempts and added 12 catches for 124 yards. He no longer profiles as a workhorse back, but he’s still quite productive when used in the right measure. And given that the Bills have a large stable of running backs, headed by veteran LeSean McCoy, Buffalo will likely be able to keep Gore on a pitch count that maximizes his effectiveness.

Gore said he signed with the Bills — the first cold weather team he has suited up for — because of how much they showed they wanted him. He said, “[i]t was the second year where they came after me. They showed that they wanted me again. In this league, especially at my age, you want to be wanted. That’s a factor that [went into the decision], especially coming off an injury.”

When he does hang up the cleats, Gore said he will retire as a member of the 49ers, who selected him in the third round of the 2005 draft and with whom Gore spent the first 10 years of his career. Even if he does not play for San Francisco again, Gore will sign a one-day contract with the team when the time comes.

Gore is a five-time Pro Bowler but has yet to win a Super Bowl (though he came close in 2012). If he wants a ring before he retires, he will likely have to play at least one more year, as the Bills do not profile as championship contenders this year.

Frank Gore just won’t quit. On Monday, the ageless running back agreed to sign with the Bills on a one-year, $2MM deal, as Adam Schefter of ESPN.com tweets. 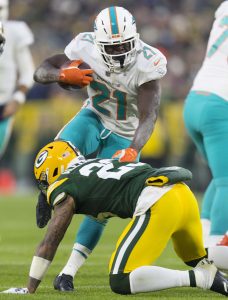 Gore, 36 in May, continues to defy the odds with productive season after productive season. Last year, Gore managed 4.6 yards per carry off of 156 attempts and added 12 catches for 124 yards. He no longer profiles as a workhorse back, but he’s still extremely effective when used in the right measure.

In addition to being extremely efficient last year, Gore also graded out as the Dolphins’ best pass-blocker, per Pro Football Focus. Football Outsiders’ metrics lauded Gore as well, as he ranked as a top-20 back in DYAR, DVOA, and success rate.

The Bills already have star LeSean McCoy leading the way with Chris Ivory in reserve, but Gore could be a change-of-pace option as the Bills move forward. The extra insurance can’t hurt, especially since McCoy averaged a career-low 3.2 yards per try in 2018.

The rumors of the Patriots‘ demise in recent years have been greatly exaggerated, but even though the club is still heading to the playoffs and remains in the hunt for a first-round bye, it doesn’t appear that this is the same New England team that we have become accustomed to. The Pats’ aging stars are beginning to play like aging stars, head coach Bill Belichick‘s future is uncertain, and Jason La Canfora of CBS Sports says there is some concern about how the team will function when owner Robert Kraft fully transfers control of day-to-day operations to his son.

As such, La Canfora believes the club could see a mass exodus of coaching and front-office talent this offseason, with OC Josh McDaniels, DC Brian Flores, and director of player personnel Nick Caserio all potentially on the move. Of course, New England could turn it on and roll to another Super Bowl title, but even if that does happen, this could be a very tumultuous winter in Foxborough.

Although he will miss the remainder of the season after suffering a foot sprain in Week 15, Dolphins running back Frank Gore will not require surgery, according to Ian Rapoport of NFL.com (Twitter link). Additionally, Gore has indicated that he wants to return for a 15th NFL campaign in 2019, tweets Adam Schefter of ESPN.com.

Gore will become a free agent next spring after inking a one-year deal with the Dolphins this past March, so Miami will need to decide if its interested in retaining the veteran back. The Dolphins have younger, intriguing backs on their roster, but thus far, they’ve shown little confidence in Kenyan Drake, while rookie Kalen Ballage only first topped four carries in a single game this past Sunday. Gore’s pact contained a league minimum salary last time around, and a 2019 accord would likely come in around the same figure.

Even at age-35, Gore somewhat astoundingly became Miami’s featured back, leading the club’s runners in carries with 156. Gore managed 4.6 yards per rush on those attempts, and also graded out as the Dolphins’ best pass-blocker, per Pro Football Focus. Football Outsiders’ metrics lauded Gore as well, as he ranked as a top-20 back in DYAR, DVOA, and success rate.

If Gore does play next year, he’ll get another shot to make his way up the NFL’s record books. He currently sits fourth all-time in rushing yardage, but he’d be able to surpass Barry Sanders for third by posting even a modest 2019 season. Gore could also jump a few spots in the league’s rushing touchdown ledger — right now, he’s tied with Tony Dorsett for 22nd with 77 scores on the ground.

Fourth on the NFL’s all-time rushing list, Frank Gore will not have any additional chances to add to his historic total this season.

The Dolphins running back will be out the rest of the way with a mid-foot sprain suffered Sunday, Ian Rapoport of NFL.com reports (on Twitter). Monday tests revealed the extent of this injury, Adam Schefter of ESPN.com tweets, and Gore’s first season with his hometown team will end after 14 games.

It’s uncertain as to whether Gore will require surgery, with Rapoport adding that decision won’t come for a bit. The bigger question pertains to Gore’s future. He is 35 (36 in May) and playing on an expiring contract. But few NFL running backs have ever exhibited this kind of durability and consistency. Gore has not missed a game since the 2010 season and has only failed to hit the 14-game barrier in one of his 14 NFL seasons.

He said in November he was going year-to-year with his career. Despite his age, it would not be surprising if Gore was back for a 15th season. A return would give Gore (14,748 yards) a reasonable chance at surpassing Barry Sanders for third place on the all-time rushing list.

With Miami this year, Gore bounced back and finished his slate with 722 rushing yards. That’s the fifth-most by anyone in an age-35 season, behind John Riggins, John Henry Johnson, Emmitt Smith and Marcus Allen. While that does not eclipse his Colts totals — 900-plus ground yards in each of those three campaigns — Gore was better on a per-play basis. His 4.6 yards per carry are the most since his 2012 Pro Bowl season. Gore leads the Dolphins in rushing by a substantial margin over backfield mate Kenyan Drake.

Drake and rookie Kalen Ballage will be the primary backs going forward for the Dolphins, who remain in playoff contention. Though, with three 8-6 teams, the 7-7 Fins need a lot of help if they are to make it two postseason berths in the past three years.

Dolphins running back Frank Gore left Sunday’s 41-17 loss to the Vikings early with a left ankle injury. The veteran back sprained his foot on the play but avoided a fracture, and is scheduled to undergo an MRI to see if any ligaments were damaged, ESPN’s Adam Schefter tweets.

This means his 122-game starting streak, the longest in the league among running backs, is more than likely to end next week. According to Cameron Wolfe of ESPN, the next-longest starting streak by a running back is just 17, held by Christian McCaffrey and Peyton Barber.

Gore, 35, finished the day with 14 yards on five carries, and was replaced by rookie Kalen Ballage, who exploded for 123 yards on 12 carries and scored on a 75-yard run. The Dolphins will likely return to the Arizona State product and Kenyan Drake to close the season, assuming Gore is to miss time.

It’s been another steady year for the veteran back, who moved into fourth place on the NFL’s all-time rushing yards list, passing Curtis Martin. Set to be a free agent at the end of the season, Gore could seriously contemplate retirement or hope to land with another team to make a run at Barry Sanders — Just 521 yards away — for the No. 3 spot.