Browns wide receiver Jarvis Landry was unable to avoid offseason hip surgery, according to Mary Kay Cabot of Cleveland.com. Landry had been hopeful that rest and rehab would be enough to deal with his injury during the offseason but instead opted to go under the knife. The news did not come as a huge surprise given the fact that Landry had previously mentioned he regretted not getting surgery sooner, but it remains noteworthy nonetheless.

The timetable for his return appears to be six-to-eight months, which would allow him back onto the field at some point during training camp.

Here’s some more injury notes from around the AFC:

Bills defensive tackle Harrison Phillips is done for the year with a torn ACL, as ESPN.com’s Dan Graziano tweets. The Bills will place Phillips on IR, opening up another spot on the roster.

Phillips played 26 of 61 snaps against the Bengals on Sunday, but did not record an official statistic. In Week 2, he was credited with half a sack.

The Bills figure to see even more snaps out of Star Lotulelei and Jordan Phillips without H. Phillips around, and one of Kyle Peko or Vincent Taylor figure to be promoted from the taxi squad.

On Wednesday, the Bills announced the signing of third-round defensive tackle Harrison Phillips. With Phillips in the fold, the Bills have just one draft pick left to sign. 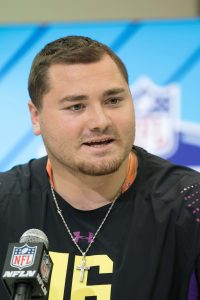 Phillips should see time right off the bat as a top substitute for Star Lotulelei at nose tackle. The Bills believe that he’ll be able to hit the ground running, thanks in part to his work ethic.

“I expect to work my tail off and do everything they ask me to do as best I can,” he said. “I’m just going to work through everything. I know that that whole defensive front has a whole wealth of knowledge and if I could just try and pick all their brains, I hope I can just come in and contribute.”