The Raiders bid adieu to three high-profile offensive linemen this offseason — center Rodney Hudson, right guard Gabe Jackson, and right tackle Trent Brown — and they didn’t do much to replace them outside of selecting RT Alex Leatherwood with the No. 17 overall pick in the draft, which was probably the most curious of this year’s first-round choices. But Vegas feels good about its young O-line talent, including 2020 fourth-rounder John Simpson. 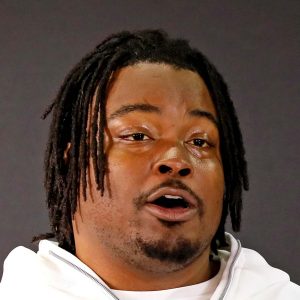 As Vic Tafur of The Athletic writes, the team would like Simpson to replace Jackson as the starter at right guard (the article was written before the draft, but given that the team’s only high-level OL pick was used on Leatherwood, the club’s expectations with respect to Simpson presumably haven’t changed). The Raiders did re-sign Denzelle Good as a fallback plan if Simpson isn’t ready, and Good also provides some insurance at RT in case Leatherwood should struggle.

Like many 2020 rookies, Simpson was hurt by the lack of offseason workouts last year. He ended up appearing in seven games (two starts), for a total of 252 snaps. The Clemson product did not fare well by Pro Football Focus’ advanced metrics, finishing with below-average grades in both run-blocking and pass-blocking. Good, though, wasn’t much better, and it’s easy to envision a downturn in the team’s overall O-line performance in 2021.

In the same article, Tafur notes that Richie Incognito — who played in only two games in 2020 due to an ankle injury — is back to full strength. The soon-to-be 38-year-old blocker is the team’s projected starter at left guard, and his experience should be beneficial to presumptive center Andre James, a 2019 UDFA who didn’t play a single offensive snap last year. 2021 seventh-rounder Jimmy Morrissey will also compete for playing time at the pivot.