APRIL 23: Jones-Drew will be in Jacksonville next Tuesday to officially retire as a member of the Jaguars, tweets Ryan O’Halloran of the Florida Times-Union.

MARCH 5: Maurice Jones-Drew will not return to the Raiders or any other NFL team for the 2015 season. The veteran running back confirmed today (via Twitter) that he has decided to end his playing career, announcing his retirement. “After much discussion with my family and business team during this offseason, I’ve decided to retire from the National Football League,” Drew wrote in his statement. “Football has been a central part of my life for the past 24 years. But, now I’m excited about and looking forward to the next chapter of my life.”

Although he played his final year in Oakland, most of Jones-Drew’s nine-year career was spent in Jacksonville with the Jaguars, and he’ll leave the game as the franchise’s second-leading rusher, behind Fred Taylor. While he didn’t mention the possibility in his statement today, it wouldn’t be a surprise if the 29-year-old signed a one-day contract with the team to formally retire as a Jaguar.

In 126 total regular season games, MJD racked up 8,167 rushing yards to go along with another 2,944 yards through the air — he finishes with a very neat 11,111 yards from scrimmage for his career. Jones-Drew’s best season came in 2011, when he was named to the NFL’s All-Pro First Team after leading the league with 1,606 rushing yards.

Although the Raiders signed Jones-Drew to a three-year, $7.5MM contract last March, the odds were slim that the team would have brought him back for the 2015 season, considering he had a $2.5MM cap hit and no dead money let on his contract. Already armed with well over $50MM in cap room, the team will create a little flexibility by removing MJD from its books.

While we learned the basic details of Larry Fitzgerald‘s new contract with the Cardinals earlier this week, we didn’t have the specific figures until today, as Joel Corry of CBSSports.com breaks down the deal in a series of five tweets. Fitzgerald will receive a $10MM bonus on the second day of the 2015 league year, and has fully guaranteed $1MM and $11MM base salaries for 2015 and 2016, respectively. That $10MM bonus will be considered a signing bonus, meaning it’s prorated over the course of the deal, which extends through 2018, though it’s scheduled to void five days after the 2017 Super Bowl. The contract, which includes a no-trade clause, reduces Fitzgerald’s 2015 cap hit to $10.85M, creating $12.75M in immediate cap room for the Cards.

Let’s round up a few more items from around the NFL’s two West divisions….

After a report yesterday indicated that former Raiders head coach John Madden sat in on the team’s interview with Mike Shanahan, Seahawks offensive coordinator Darrell Bevell revealed that Oakland owner Mark Davis wasn’t even in attendance during his meeting with the team, tweets Gregg Bell of the Tacoma News Tribune. While that doesn’t necessarily mean anything – perhaps the timing just didn’t work out, with Bevell’s interview window set to close – it may not be a good sign for his candidacy, writes Darin Gantt of Pro Football Talk.

Here’s more from around the AFC West, with a focus on the Raiders:

A few assorted items to close out this Monday evening:

Manish Mehta of the New York Daily News (on Twitter) hears that Chris Johnson‘s visit today with the Jets was productive with good vibes all around. However, the Jets are sticking to their budget and will only ink the veteran if it’s a good value for them (link). The depressed running back market suggests that the Jets won’t pay more than $3-4MM for his services. More from the AFC..

As they continue attempting to fortify their offensive line, the Dolphins are hosting 25-year-old free agent Jason Fox for a visit, writes Armando Salguero of the Miami Herald. According to Salguero, if the team were to sign Fox, who reportedly worked out for the Chiefs earlier this week, the former Lion would be viewed as a depth piece with a chance to earn a larger role, not the Dolphins’ starter at right tackle.

Here’s more on another free agent paying a visit to Miami, as well as a few other notes from around the AFC:

Aaron Wilson of the Baltimore Sun and the National Football Post has passed along the specific details on a few recent contracts, so let’s dive right in and round them up (all links go to Twitter)….

As new Raiders running back Maurice Jones-Drew restarts his career in Oakland, he won’t be handed the starting job. Jones-Drew told Vic Tafur of the San Francisco Chronicle that it’s a “wide-open” competition at running back (Twitter link), presumably between himself and incumbent Darren McFadden, who was re-signed to a one-year deal earlier this month.

Neither runner did much of anything in 2013, with McFadden rushing for 379 yards in 10 games, while Jones-Drew totaled 803 yards rushing in 15 games, averaging 3.4 yards per carry, just 0.1 yards better than McFadden. Behind McFadden and MJD are Latavius Murray, Kory Sheets and Jeremy Stewart, none of whom have starting experience.

Jones-Drew said on his conference call today that he’s looking forward to playing for an organization that he has loved since he was a little kid, and that he feels he was done wrong by the Jaguars (Twitter links).

Catch more AFC notes in the links below:

2:04pm: According to Schefter (via Twitter), Jones-Drew is “officially a Raider,” having signed a three-year contract with the team.

8:26am: The Raiders are in the process of finalizing a contract with free agent running back Maurice Jones-Drew, according to multiple reports. Scott Bair of CSNBayArea.com hears from two sources that the sides have agreed to terms and that the deal is just pending a physical. According to Adam Schefter of ESPN.com (via Twitter), the agreement isn’t quite official, but MJD and the Raiders are expected to agree on a three-year deal later today. 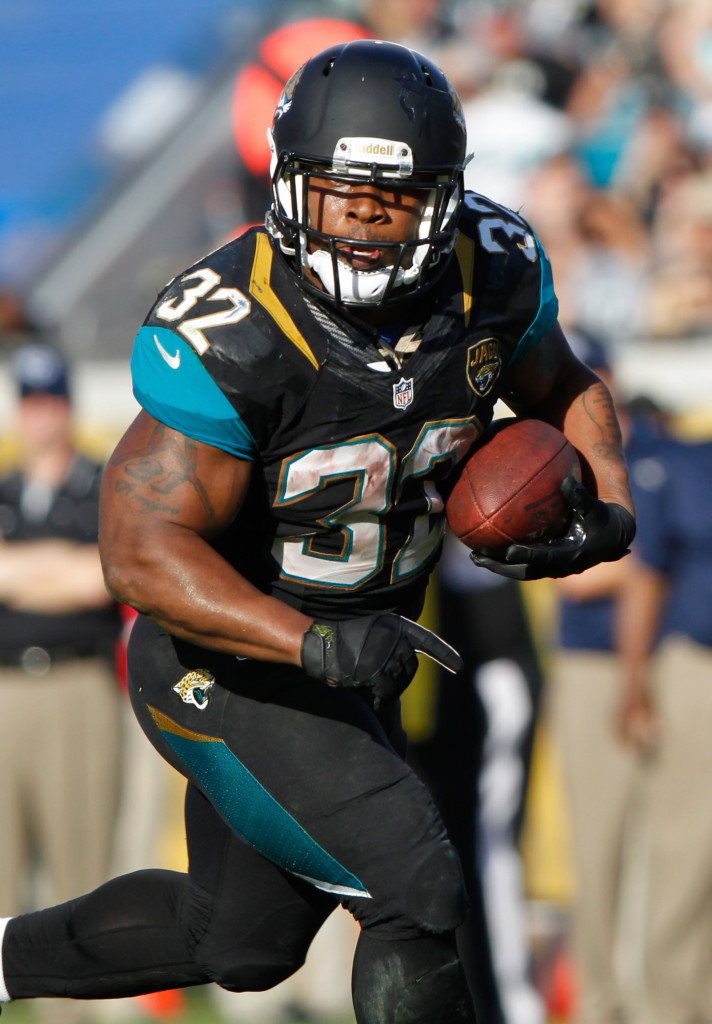 An agreement appeared to come together quickly after word broke yesterday that Jones-Drew would be visiting the Raiders today. A report earlier in the week suggested that the Steelers, Jets, Dolphins, and Patriots were all in the mix for the veteran back, but the Dolphins agreed to sign Knowshon Moreno, and a separate report indicated that the Pats haven’t been in contact with MJD. As such, it looks like the Steelers and Jets, who both met with the former Jaguar earlier this month, were the Raiders’ prime competition to land him.

By signing with the Raiders, Jones-Drew will be joining the team he rooted for growing up — the California native still lives in the area. Oakland also re-signed Darren McFadden earlier in the month, but McFadden has been plagued by injuries throughout his career and will be on a one-year, prove-it deal. With Jones-Drew in the fold, the Raiders are hoping to replace the 2013 production provided by Rashad Jennings, who signed with the Giants. Unproven backs like Latavius Murray and Kory Sheets could also be in the mix for carries in Oakland.

Following an excellent 2011 season, in which he averaged more than 100 rushing yards per game, Jones-Drew was slowed by injuries in 2012. He appeared in 15 games in 2013, but underachieved for a subpar Jacksonville team, averaging just 3.4 yards per carry, a significant drop-off from his previous career low of 4.2. Having turned 29 last week and accumulated more than 1,800 carries in his NFL career, the former second-round pick’s best days are likely behind him, but a modest bounce-back season in 2014 definitely isn’t out of the question.

With Jones-Drew and Moreno off the market, LeGarrette Blount represents perhaps the most appealing free agent running back still available. According to Aaron Wilson of the Baltimore Sun (via Twitter), Blount flew into Pittsburgh last night for a Friday visit with the Steelers. Blount is also drawing interest from his old team, the Pats.

Another suitor has entered the mix for Maurice Jones-Drew, according to Ian Rapoport of NFL.com, who reports (via Twitter) that the veteran running back will visit the Raiders tonight and tomorrow. Mike Garafolo of FOX Sports tweets that the two sides hope to close a deal quickly, while Adam Schefter of ESPN.com (Twitter link) hears from a source that there’s a “good chance” Oakland signs Jones-Drew.

A report earlier in the week suggested that the Steelers, Jets, Dolphins, and Patriots were all in the mix for Jones-Drew, but the Dolphins have since agreed to sign Knowshon Moreno, and a separate report indicated that the Pats haven’t been in contact with MJD. Although the Steelers, and perhaps the Jets, remain in the hunt, Pittsburgh doesn’t have the cap space at the moment to meet the running back’s asking price. The Raiders, on the other hand, certainly aren’t lacking in cap room, even after a handful of free agent signings this month.

The Raiders have re-signed Darren McFadden, but have interest in adding at least one more running back to replace the departed Rashad Jennings. The team was linked to Andre Brown earlier in March, though it appears that possibility hasn’t gained much traction in the last couple weeks. Jones-Drew would make sense as an on-field fit for the Raiders, and a deal with Oakland would land him on the team he grew up rooting for — the California native still lives in the area, according to Rapoport (via Twitter).