Rashad Weaver‘s pro career isn’t getting off to the best start. The Titans rookie has been charged with simple assault, Emily Proud of WKRN Nashville tweets. 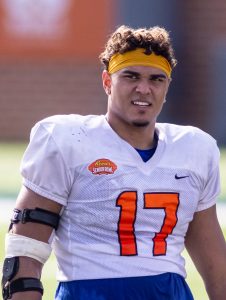 The incident apparently happened on April 18th with the report getting filed on April 30th, the day before Weaver was drafted in the fourth-round. Tennessee took the edge rusher from Pittsburgh 135th overall. According to proud, Weaver is accused of punching a woman in the head. While the report says an officer on the scene “observed no injury consistent with a punch to the head,” the report also says that “before leaving he (Weaver) stated to other officers on scene that he had no problem hitting a female if they needed it.”

The woman says she was later diagnosed with a concussion, and that she was pregnant at the time of the incident. Obviously, it’s a serious situation. Depending on how the investigation plays out, Weaver could very well be looking at a suspension before he ever suits up for an NFL game.

His attorney Dennis M. Blackwell issued a statement, which you can read in full courtesy of this tweet from Tom Pelissero of NFL Network. He calls the allegations “completely false and reckless,” and says that “without question and without hesitation, we deny Rashad punched anyone, especially a woman.”

Weaver missed the entire 2019 season with a torn ACL, then returned last year and had 7.5 sacks and 14 tackles for loss in nine games. The Titans had one of the worst pass-rushes in the league last year and Weaver was the only edge rusher they picked in the 2021 draft, but it’s unclear now if they’re going to be able to count on him this season.

Meanwhile, Tennessee issued a brief statement Monday afternoon, which you can read via this tweet from beat writer Paul Kuharsky. The Titans say they were only made aware of the incident this morning and that they’re “gathering details.”