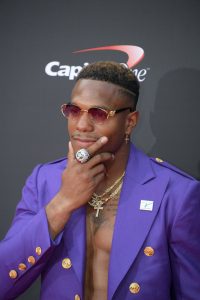 The Eagles have re-signed Rodney McLeod to a two-year contract, per a club announcement. The new deal will be worth $12MM in total, Ian Rapoport of NFL.com (via Twitter) hears.

McLeod has been a starter since the 2013 season, when he was still with the (St. Louis) Rams. That streak continued in 2016 when he hooked on with the Eagles, though he was interrupted by a knee injury in 2018 that limited him to just three games. After that, the Eagles asked him to adjust his deal and he obliged.

Last year, he was able to return and start in all 16 of the Eagles’ regular season games. He came away with two interceptions – bringing his career tally to 13 picks – along with six passes defensed, two forced fumbles, one sack, and 76 total stops.

McLeod is currently slated to return to his starting position. This time around, he’ll be paired with Jalen Mills on the first-string unit. Earlier today, the Birds re-upped Mills on a one-year deal and declined their option on locker room leader Malcolm Jenkins.

The details are in on Rodney McLeod’s reworked deal with the Eagles. McLeod’s 2019 base salary will drop from $7.5MM to $1.5MM under the revised terms, according to Field Yates of ESPN.com (on Twitter). In total, the move creates $7.469MM in new cap room for Philly.

Under the old terms of his deal, McLeod’s contract meant that he was likely a goner in Philadelphia. McLeod has been a starter since the 2013 season and started the first three games of 2018 for the Eagles, but a knee injury ended his season in September. Given the Eagles’ limited cap room and the awful market for free agent safeties over the last year, McLeod probably didn’t have much leverage in this round of negotiations with Howie Roseman & Co.

On the plus side, McLeod has done well for himself over the course of his career. He joined the Eagles on a five-year, $35MM deal prior to the 2016 season and is still young enough to cash in again down the line. He’ll turn 29 in June, just before training camp begins for his eighth NFL season.

The Eagles have agreed to rework Rodney McLeod‘s contract, according to Jeff McLane of the Philadelphia Inquirer (Twitter link).

McLane doesn’t have details on the revised contract yet, but he notes that it’ll keep him with the team for 2019. As McLane wrote in a follow-up tweet, a lot of people thought the team might move on from McLeod this offseason, but this move apparently guarantees his return. His cap number had been set to be $9.9MM for this year, although that’s presumably been reduced.

McLeod signed a deal that went through the 2020 season back in 2016, but he tore his ACL in Week 3 of this year. McLeod signed with the Rams as an undrafted free agent back in 2012, and blossomed into a nice player in St. Louis. His strong play landed him a five-year, $37MM deal with Philly.

McLeod is a key part of the defense and his injury was a large part of the reason the Eagles’ secondary collapsed this year, so it’s not surprising they figured out a way to keep him.

Eagles safety Rodney McLeod‘s season is presumably over. The team announced on Twitter that they’ve placed the safety on the injured reserve. The Eagles have promoted wideout DeAndre Carter to take the open roster spot.

McLeod underwent knee surgery earlier this week after suffering a torn MCL, and many assumed he’d ultimately land on the IR. However, Doug Pederson initially refused to comment about whether the safety would end up missing the remainder of the season. Instead, the head coach simply said the defensive back would be out for “a while.” Considering these comments, perhaps the Eagles are optimistic that McLeod could return to the field towards the end of the season.

McLeod signed a five-year, $35MM deal with the Eagles prior to the 2016 season. He’s proven himself to be worth the expenditure, as he has notched three interceptions in each of the last two years. After compiling 10 tackles and four passes defended through the first three weeks of this season, Pro Football Focus ranked McLeod as a top-20 safety in the NFL.

With McLeod sidelined, the Eagles will likely turn to Corey Graham as the replacement in the starting lineup. Otherwise, the team is rostering only two other healthy safeties: starter Malcolm Jenkins and recent trade acquisition Deiondre’ Hall. As our own Dallas Robinson notes, the safety market is starting to dry up, with Mike Mitchell, T.J. Ward, Lardarius Webb, Tyvon Branch, and Jairus Byrd among the top available free agents.

Carter has bounced around the league since going undrafted out of Sacramento State in 2015, spending time with the Ravens, Raiders, Patriots, and 49ers. He has one catch for 10 yards this season with Philly, and he could temporarily serve as a returner. The Eagles decision to promote Carter instead of practice squad safety Tre Sullivan could be an indication that Alshon Jeffery won’t be ready to go for tomorrow’s game against the Titans (as noted by Jeff McLane of Philly.com on Twitter).

Eagles safety Rodney McLeod recently underwent knee surgery, head coach Doug Pederson told reporters, including Eliot Shorr-Parks of 94 WIP (Twitter link). However, while a recent report indicated Philadelphia would place McLeod on injured reserve, Pederson refused to confirm McLeod is out for the season, indicating simply that the defensive back will be out for “a while,” per Jeff McLane of the Philadelphia Inquirer (Twitter link).

McLeod, 28, suffered the injury in the Eagles’ Week 3 win over the Colts. He’s just the latest starting safety to succumb to injury, joining Da’Norris Searcy of the Panthers, Chris Conte of the Buccaneers, and Ricardo Allen of the Falcons. Eric Reid, the most notable free agent safety at this stage, was just picked up by the Panthers, so the Eagles are looking at a thin group of available players if they choose to go out-of-house for reinforcements, with options such as Mike Mitchell, T.J. Ward, Lardarius Webb, Tyvon Branch, and Jairus Byrd headlining the free agent market.

Veteran Corey Graham will likely step into the Eagles’ starting lineup in place of McLeod, but Philadelphia had been playing a good deal of three-safety sets (Graham has posted 55% playtime this season). As such, the club will need someone to replace Graham’s role in the defense. While Pederson admitted looking for outside help is an option, the Eagles could also search internally, where reserves such as Deiondre’ Hall could be asked to play more snaps. Philadelphia might also consider moving a cornerback like second-year pro Rasul Douglas to safety.

McLeod joined the Eagles on a five-year, $35MM deal prior to the 2016 season. He’s proven himself to be worth the expenditure as he has notched three interceptions in each of the last two years. Through the first three weeks of this season, Pro Football Focus has ranked McLeod as a top-20 safety in the NFL.