Rueben Randle‘s inconsistent play was maddening to the Giants, but the Eagles signed him to a free agent deal last March with the belief that they could get him to fulfill his potential. They were wrong. Randle was cut in August and, despite having a couple of NFL auditions, never caught on with another team.

The Bears were one of the teams to try him out and while he did not earn an NFL deal on the spot, they are signing him to a reserve/futures deal, per a team announcement.

Randle, 26 in May, averaged 56 receptions, 782 yards, and six touchdowns over the three seasons with the Giants. At 6’4″ and 205 pounds, the former second-round pick offers solid athleticism for a receiver of his size and the Bears are willing to take a low-risk look at him.

In an offseason where they could lose pending free agent Alshon Jeffery, the Bears must explore every depth option available.

The Eagles have announced a series of roster moves today, and the most surprising transaction is the release of wide receiver Rueben Randle, who was signed to a one-year deal over the offseason. Randle, who is still only 25 years old, was thought to be a clear starter for Philadelphia after averaging 56 receptions, 782 yards, and six touchdowns over the past three seasons with the Giants.

But after the Eagles acquired Dorial Green-Beckham, Randle’s roster spot became tenuous, especially given his lackluster performance during the preseason. Philadelphia handed Randle $500K in guarantees plus a $25K roster bonus, so the club will incur $525K in dead money. Because he’s a vested veteran, Randle will not have to clear waivers and will become a free agent immediately.

The Eagles also made the following transactions:

Wide receiver Rueben Randle joined the Eagles earlier this offseason on a one-year deal after spending the first four seasons of his career with the division-rival Giants. If Randle had it his way, he’d still be with Big Blue. The 25-year-old told Bart Hubbuch of the New York Post he was “a little disappointed” the Giants didn’t show an interest in re-signing him before he headed to Philadelphia. “I just moved on and accepted it for what it was. I would’ve liked to have stayed,” said Randle, who called it “an unfortunate situation.” Randle was a productive and durable member of the Giants during his tenure with them, hauling in 188 passes and 20 touchdowns on 14.1 yards per catch while appearing in 64 straight regular-season games. He racked up 57 receptions and a career-best eight TDs last season.

Receiver Rueben Randle says he turned down longer deals than the modest one-year offer he accepted from the Eagles last week, according to Dave Zangaro of CSNPhilly.com. “There were [other teams interested],” the 24-year-old said. “I just felt like it was a better opportunity for me here to showcase my talents on a one-year deal, to go out and prove myself.” Along with Jordan Matthews, Randle is one of the Eagles’ two most accomplished wideouts. Not surprisingly, then, he expects to start. “I feel confident that I will be [a starter]. That’s for me to go out there and prove,” he said.

THURSDAY, 8:30am: Randle’s one-year deal actually only has a base value of $1.025MM, tweets Zach Berman of the Philadelphia Inquirer. $500K of that total is fully guaranteed, and the contract can be worth $3MM+ via incentives.

WEDNESDAY, 4:11pm: The Eagles announced that they have signed Rueben Randle to a one-year deal. Agent Vincent Taylor of Elite Loyalty tells Ian Rapoport of NFL.com (on Twitter) that the deal is worth more than $3MM with $500K guaranteed. 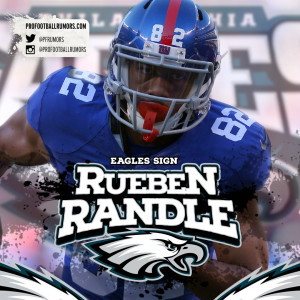 Randle, who will turn 25 in May, was one of the youngest unrestricted free agents on the market this offseason. The receiver put up solid numbers during his last few years in New York, though his up-and-down play was a source of frustration for some fans. He set career highs in 2014 with 71 receptions and 938 yards, then caught a career-best eight touchdowns in 2015, to go along with 57 catches and 797 yards.

The Giants were said to be concerned about Randle’s work ethic and his “desire to be great,” per one report from Jordan Raanan of the Star-Ledger. That report gained some validity this offseason as the Giants didn’t make much of an effort to re-sign him.

This year’s crop of free agent wide receivers was rather underwhelming on the whole, but Randle came in as our No. 4 player at the position. In front of Randle, we had Marvin Jones, Travis Benjamin, and Rishard Matthews. Randle’s No. 4 ranking put him ahead of players like Anquan Boldin, Jermaine Kearse, Mohamed Sanu, Marques Colston, Brandon LaFell, James Jones, and Andre Johnson.

Before signing with the Eagles, Randle drew some interest from the Rams.