Veteran offensive lineman Ty Sambrailo may be walking away from football. The Titans placed the seventh-year tackle on their reserve/retired list Tuesday.

Sambrailo, 29, re-signed with the Titans this offseason. However, he will follow both Kevin Johnson and Abry Jones — both of whom 2021 free agency additions — in landing on the team’s retired list.

A former second-round pick, Sambrailo has been with the Titans since 2020. He filled in as a starter for the injured Taylor Lewan last season and started for the Titans in Week 2 of this year. The former Broncos and Falcons O-lineman has played in 71 career games, making 19 starts. Sambrailo suffered a knee injury that ended his 2020 season, however, and began Tennessee’s training camp on the PUP list.

The Titans gave Sambrailo a one-year, $1.9MM contract earlier this year. The Falcons gave him a three-year, $14.25MM deal but cut the Colorado State alum two years into it. Sambrailo was inactive for the Titans’ Week 5 game Sunday.

The Titans have seen their right tackle plans change considerably over the past year. They will retain a veteran with experience at this spot, however.

The journeyman blocker’s return may be more impactful now. The Titans have traded would-be Jack Conklin successor Isaiah Wilson to the Dolphins, and they released Dennis Kelly — their 16-game right tackle starter last season — earlier this week. Sambrailo has played most of his career at right tackle, but he was called upon to play left tackle last season after Taylor Lewan‘s injury.

A former second-round Broncos pick who was initially tabbed to be their Week 1 left tackle starter in Peyton Manning‘s final season, Sambrailo has spent most of his career with the Falcons. He joined the Titans last year, doing so after he spent four seasons as the Falcons’ swing tackle.

It is not certain the Titans will ask Sambrailo to start, but the 28-year-old blocker may be counted on given the franchise’s developments at right tackle.

The Titans have agreed to sign Ty Sambrailo, according to a team announcement. The offensive lineman will receive a one-year deal with his third career pro club.

Sambrailo, who was previously with the Broncos and Falcons, figures to slot in as offensive line depth. He’s not a world-beater, but his versatility is a plus – he can offer help at tackle while also, potentially, lining up at guard. At tackle, he’ll backstop left tackle Taylor Lewan and right tackle Dennis Kelly.

The 28-year-old suited up for 13 games off of the Falcons’ bench last year. He also enjoyed a highlight reel moment that he’ll never forget – a 35-yard touchdown catch against the Buccaneers to close out the season.

The Falcons will cut offensive lineman Ty Sambrailo, according to a source who spoke with NFL.com’s Mike Garafolo (on Twitter). It’s just the latest Monday morning move by the Falcons to free up cap space this offseason and more releases could be on the way.

Sambrailo, who just celebrated his 28th birthday, played in 13 games as a reserve last season. He also got to leave the Falcons with a memorable moment – a 35-yard touchdown reception against the Buccaneers to close out the season and his Atlanta tenure.

By releasing the veteran, the Falcons will save roughly $3.7MM against the 2020 cap. That’s money that can be used to shore up their defense and, potentially, help bring another running back into the fold. Moments ago, the Falcons released one-time star Devonta Freeman, leaving them perilously thin in that area. Then again, many anticipate that they’ll target their next running back in the (likely to be teleconferenced) draft.

Before the official start of business today, the Falcons also informed cornerback Desmond Trufant that he’ll be released sometime this week.

“Tevin’s going to do well, wherever he is,” he said.

The stumble of words just goes to confirm what many have expected: That Coleman will not be back with the Falcons in 2019. Projected as the No. 2 free agent running back behind Le’Veon Bell, the Indiana product is due for a big payday. That wasn’t likely to come from the Falcons, who already have the league’s third-highest-paid running back on the roster in Devonta Freeman.

The Falcons also have a capable backup ready to take Coleman’s role in Ito Smith, who gained 315 yards and four touchdowns as a rookie. While it won’t be with the Falcons, Coleman is sure to command a primary back role with another team after showcasing a dual-threat skill set in his time in Atlanta.

The Falcons and offensive lineman Ty Sambrailo agreed to a three-year extension, according to a team announcement. The new pact will keep him in the fold for years to come and can pay up to $18MM, according to Mike Garafolo of NFL.com (on Twitter).

“We are excited to bring Ty back as a part of our brotherhood,” Falcons coach Dan Quinn said in a statement. “His versatility has proven to be one of his many strengths. We look forward to him being a valuable piece of the offensive line.”

Sambrailo first came into the league as a second-round pick of the Broncos in 2015. Just prior to the 2017 season, the Broncos shipped him to the Falcons for a 2018 fifth-round draft pick.

That proved to be a tremendous pickup for the Falcons –Sambrailo took over as the club’s starting right tackle near the end of the 2018 season and proved his worth. Meanwhile, Ryan Schraeder was demoted to the bench, and his status is murky with three years and $18.8MM to go on his deal.

Sambrailo made $959K last season, so it’s safe to assume that he’ll see a significant pay bump on his new deal. In an offseason where the Falcons have already bid farewell to cornerback Robert Alford, defensive end Brooks Reed, and kicker Matt Bryant, Sambrailo has stability with Atlanta. He joins linebacker Bruce Carter and defensive end Steven Means as Falcons players with new deals signed in February.

The Broncos have traded offensive tackle Ty Sambrailo to the Falcons for a 2018 fifth-round pick, a source tells Adam Schefter of ESPN.com (on Twitter). 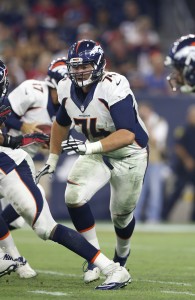 Sambrailo is the third notable offensive tackle to be traded for a fifth-round pick this week. The Browns got the ball rolling when they sent former FSU standout Cameron Erving to the Chiefs. The next day, the Lions shipped Laken Tomlinson to the Niners for a 2019 fifth-rounder. Erving and Tomlinson were both former first-round picks. Sambrailo was a second-round choice.

Sambrailo was fighting for his roster spot this year and, apparently, he didn’t do enough in camp to prove worthy of significant playing time. This year, the Broncos spent a first-rounder on tackle Garett Bolles and added Menelik Watson on a three-year, $18.3MM deal in free agency.

Sambrailo projects to be the Falcons’ first swing tackle off the bench, ahead of August addition Austin Pasztor. Rookie Sean Harlow and second-year man Wes Schweitzer will be the primary support for starting guards for Andy Levitre and Ben Garland.