Bond was drafted by the Buccaneers in the sixth-round back in 2016, and spent his first few seasons in Tampa, starting a handful of games. He was slapped with a PED suspension in October, and signed with the Bears in December after it was lifted. He’s returning to Chicago on a one-year deal, presumably for the league minimum.

When Arizona State announced they were hiring former Jets and Chiefs head coach Herm Edwards, the decision was met with a lot of ridicule. Nobody’s laughing now though, as Edwards has done a near-universally praised job turning around the program the last couple of years. Edwards has emphasized that he’s running the program like an NFL team, and he’s hired a bunch of ex-NFL guys to fill out his staff. Apparently, a few of those guys might be eyeing a return to the league. Former Bengals coach Marvin Lewis, who serves as an advisor to ASU, is going to be in “serious consideration” for an NFL head coaching job next cycle, reports Mike Garafolo of NFL Network (Twitter video link).

Lewis was fired by the Bengals following last season after 16 years at the helm in Cincinnati. He was never able to win a playoff game but he completely changed the Bengals’ culture for the better and turned them into a consistent winner, making the playoffs seven times and winning the AFC North four times. Lewis caught a lot of flak toward the end of his tenure in Cincy when things got stale, but the Bengals’ 0-6 start in 2019 sure makes him look a lot better by comparison. It’ll be very interesting to see if he starts getting interviews as Garafolo predicts.

The Buccaneers re-signed linebacker Devante Bond to a one-year deal, as Jenna Laine of ESPN.com tweets. It’s a one-year deal for the league minimum, so it won’t put a dent in the Bucs’ limited cap space. 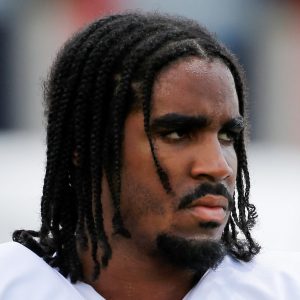 Bond, 26 in July, has appeared in 25 games (six starts) for the Bucs over the last two seasons. In 2018, he registered 22 total tackles, which more than quintupled his showing from 2017.

The Bond deal marks the Bucs’ second move of the day, though it pales in comparison to the first. On Tuesday morning, the Bucs re-upped offensive tackle Donovan Smith on a three-year, $41.25MM deal with $27MM guaranteed.

In other Bucs news, the team recently decided against tendering safety Andrew Adams. Also, contrary to some speculation, the Bucs are not shopping linebacker Lavonte David.