The 49ers have agreed to sign wide receiver Devin Funchess to a practice squad deal (Twitter link via NFL.com’s Tom Pelissero). Funchess, once a rising star with the Panthers, has yet to see the field in 2021. 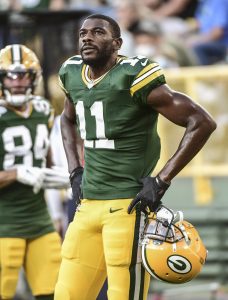 The Packers released Funchess in August with an injury settlement. Between that and his 2020 opt-out, Funchess’ Packers run came and went without having ever played a down for Green Bay. His last action came in 2019 with the Colts, a stint that was really more like a cup of coffee. That season ended midway through Week 1, thanks to a broken collarbone. On the plus side, Funchess secured $10MM in salary that year, plus some additional bucks from his terminated Packers contract.

The Panthers selected Funchess in the second round of the 2015 draft and watched him enjoy the best year of his career in 2017, compiling 63 receptions for 840 yards and eight touchdowns. Even though it took him 111 targets to get those 63 grabs, it was a glimpse of his future potential.

No one knows what Funchess has to offer at this point, but the Niners are eager to find out. There won’t be a whole lot of targets to go around behind Deebo Samuel, Brandon Aiyuk, and tight end George Kittle, but with Mohamed Sanu on injured reserve, Funchess could see some snaps ahead of Jauan Jennings, Trent Sherfield, and/or Travis Benjamin.

The Packers have released Devin Funchess with an injury settlement, per the league’s transactions wire. Between this and last year’s opt-out, Funchess’ Packers run will end without having ever played a game for Green Bay.

This was the expected move after the Packers placed Funchess on IR earlier this week. Funchess has not played since his 2019 stint with the Colts, which was really more like a cup of coffee. That season ended midway through the season opener thanks to a broken collarbone. Funchess earned $10MM in salary that year — this time, he’ll leave with a portion of his one-year, $1.2MM contract.

With Funchess out of the picture, the Packers will move forward with Davante Adams, Marquez Valdes-Scantling, Allen Lazard, and Randall Cobb as their top WRs.

Could Devin Funchess‘ stint with the Packers end without him appearing in a game? There’s certainly a chance. As ESPN’s Rob Demovsky recently wrote, the veteran receiver is on the roster bubble heading into training camp.

There’s a variety of reasons why the Packers could look to move on from Funchess. For starters, the wideout has only appeared in a single game since the 2019 season; a broken collarbone limited him to only one content in 2019 (with the Colts), and he opted out of his first season with the Packers in 2020 due to COVID concerns. Funchess is still only 27-years-old, but it’s never easy for any player to return following a two-year absence.

Further, the Packers depth chart is packed. Behind Davante Adams, the Packers are eyeing a grouping that includes holdovers like Marquez Valdes-Scantling, Allen Lazard, Equanimeous St. Brown, and Malik Taylor. There’s also third-round rookie Amari Rodgers, and if you add Funchess to that bunch, that’s seven guys competing for at most six spots…and that doesn’t include the journeymen and undrafted free agents who are rounding out the offseason roster.

The financials aren’t necessarily in the receiver’s favor, either. The team would get around $1.2MM in savings by cutting the 27-year-old…while that doesn’t sound like a significant chunk of money, it still provides more financial breathing room than some of the other receiver options. While Funchess could theoretically give the team some money back, he’s already participated in one restructuring this offseason.

To top it all off, Funchess skipped OTAs earlier this offseason, and he only showed up to two of the three minicamp sessions. As a result, coach Matt LaFleur recently indicated that the six-foot-four receiver has some catching up to do.

“Well, he sure looks the part, there’s no doubt about that,” LaFleur said (via Wes Hodkiewicz of the team website). “You’re talking about a big, strong, long, physical guy that can run, sink his hips. So, I know he’s got a lot to learn, but we’re excited about having him on this team and letting him go compete and we’ll see what he can do.”

Funchess is only four years removed from a campaign where he finished with 840 yards from scrimmage and eight scores, and he hasn’t necessarily had the best luck over the past few years. As a result, there’s a good chance that the receiver will end up cracking a Week 1 roster. However, there’s also a chance that might not be in Green Bay.

Devin Funchess is staying put. On Tuesday, the wide receiver agreed to take a pay cut in order to remain with the Packers for 2021 (Twitter link via NFL.com’s Ian Rapoport).

Funchess inked a one-year, $1.2MM deal with the Packers last year but later decided to opt out in the midst of the pandemic. Per the league’s agreement with the NFLPA, Funchess’ contract tolled into 2021. The Packers were likely thinking about releasing the veteran in advance of free agency, so he agreed to a small salary reduction in order to make the numbers work.

Funchess has not played since his 2019 stint with the Colts, which was really more like a cup of coffee. That season ended early due a broken collarbone — he recorded three grabs for 32 yards in his lone game. For the year, he earned $10MM in salary.

The Packers bypassed receiver prospects in the draft after signing Devin Funchess. But the recent acquisition will not play for Green Bay this season. He will opt out, Field Yates of ESPN.com reports (on Twitter).

Funchess signed a one-year, $2.5MM deal that contained incentives that could have bumped the value north of $6MM. That contract will toll to 2021. If Funchess does not face a heightened risk of encountering COVID-19 complications, he will receive a $150K stipend. Funchess, 26, confirmed family members have experienced significant issues with the coronavirus (Twitter link).

Green Bay attempted to trade up with teams for a receiver in Round 2 of the draft but surprisingly exited the virtual selection event without taking a single wideout. Funchess was no sure thing, considering his inconsistent Panthers track record and injury-shortened Colts season. Tuesday’s news should prompt the Packers to make a move at this position. Their sans-Funchess depth chart looks a lot like last season’s, which featured just one player — Davante Adams — eclipsing 500 yards. That had not previously happened in a Packers non-strike-shortened season since 1977.

Funchess played in one game for the Colts last season. The five-year veteran, however, combined to post 1,389 yards and 12 touchdowns between the 2017-18 campaigns.

While this year’s virtual draft will naturally lead to some challenges, Packers general manager Brian Gutekunst still expects to be active in trade talks throughout the weekend.

“I don’t think there’s going to be too much of an issue, certainly not from our end,” Gutekunst said (via Curtis Crabtree of ProFootballTalk.com).

Gutekunst also mentioned that the team would consider moving up in the first round “if we need to.” The Packers highest pick is currently No. 30, which is one of the organization’s 10 selections.

The Packers have been connected to a number of first-round-caliber prospects, including defensive tackle Raekwon Davis. While they’ve been mentioned as a suitor for quarterbacks like Jordan Love, the team isn’t prioritizing the position in the upcoming draft.

Let’s check out some more notes out of Green Bay…