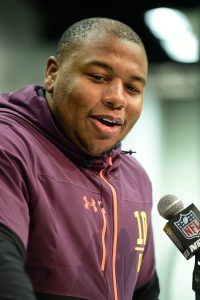 This week’s combine re-checks produced very positive news for Oklahoma wide receiver Marquise “Hollywood” Brown, according to Ian Rapoport of NFL.com (on Twitter). Brown, who has been out of a boot for weeks, was given the thumbs up on his surgically-repaired foot.

Despite the injury, the 5’9″ receiver is widely projected as a first round pick. Last year, Brown put himself on the NFL radar with 75 catches for 1,318 yards and ten touchdowns.

The Giants are said to be eyeing pass rushers with their No. 6 overall pick, and while Clemson defensive lineman Dexter Lawrence does not fit the bill per se, he would be a strong addition to the club’s front seven. Per Mike Garafolo of the NFL Network, the Giants hosted Lawrence on a pre-draft visit today (Twitter link).

Lawrence is a first-round talent, and given the mass exodus of defensive playmakers that Big Blue has witnessed over the last several seasons, it would not be particularly surprising to see the club double dip on defense in the first round of the 2019 draft. In addition to the No. 6 pick, the Giants also hold the No. 17 selection, and Lawrence may still be on the board when they are on the clock with the latter choice.

Lawrence finished his collegiate career with 10 sacks and 18 tackles for loss, and while he may not be a sack machine at the next level, he does offer the ability to apply at least some interior pressure.

Clemson’s loaded defensive line did not have Dexter Lawrence during the Tigers’ two College Football Playoff games, and the defending national champions will say goodbye to the junior interior defender early.

A projected first-round pick, Lawrence will forgo his final season and enter the 2019 draft, announcing his decision on Twitter.

Lawrence and multiple other Tigers were suspended because of failed drug tests ahead of the Clemson-Notre Dame game. Nevertheless, Lawrence will likely join teammates Clelin Ferrell and Christian Wilkins as first-round picks come April.

Ranked 13th in Todd McShay’s most recent prospect hierarchy, Lawrence finished his career with 10 sacks and 18 tackles for loss. He played for two national championship teams and will be part of a loaded 2019 glut of defensive linemen expected to go off the board early.

Case Keenum was the best story of the 2017 NFL season, and parlayed his magical run with the Vikings into a two year $36MM contract with the Broncos. While Keenum has had some nice moments this year, he’s mostly been a big disappointment. The Broncos clinched a losing season with their loss last night to the Raiders, and Keenum threw a pair of awful interceptions. With Vance Joseph a near lock to be fired at the end of the season, Denver will have an entirely new coaching staff next year with no ties to Keenum.

Only $7MM of his salary is guaranteed for next season, so the Broncos could realistically cut him this spring. Denver’s decision on whether to keep him “may have more to do with who else is available” than anything else, according to Nicki Jhabvala of The Athletic. Jhabvala notes that there may not be a Kirk Cousins-esque surefire starter available in free agency, and that could ensure that Keenum stays another year. Even if he is still on the team in 2019, he’ll likely be competing with a highly drafted rookie.