The Bears worked out free agent linebackers Joshua Perry and Kasim Edebali at their minicamp on Wednesday, according to Adam Jahns of the Chicago Sun-Times (Twitter link). 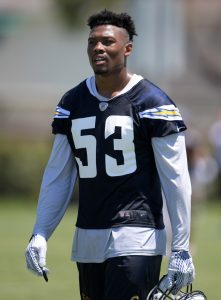 Perry, a fourth-round pick in 2016, saw a good deal of action during his rookie campaign, although most of his snaps came on special teams (75% playing time). He was waived/injured at the outset of the 2017 season, and subsequently released to the free agent market. After bouncing on-and-off the Colts’ practice squad a year ago, Perry inked a futures deal with Indianapolis in January, only to be waived again last month. He’d give Chicago special teams depth, but Perry would never see the field on defense barring an injury, as Roquan Smith and Danny Trevathan will handle inside linebacker duties for the Bears.

Like Perry, Edebali has spent most of his career on special teams, but he could be of a bit more interest to the Bears given his ability to play on the edge. Aside from former first-rounder Leonard Floyd, Chicago is counting on cast-offs such as Aaron Lynch and Sam Acho at outside linebacker, so Edebali could conceivably compete for rotational snaps if signed. The 28-year-old Edebali split the 2017 season between Denver and Detroit following three years in New Orleans.

Geathers, who suffered a season-ending neck injury in Week 15 of 2016 vs. Minnesota, underwent surgery on a bulging disk in March and was placed on the reserve/physically unable to perform list on Sept. 2. The third-year safety returned to practice following the Colts’ 27-0 loss to Jacksonville in Week 7.

A fourth-round selection out of Central Florida in 2015, Geathers appeared in 15 games as a rookie before emerging as the team’s starting free safety in 2016. He tallied 58 tackles, five passes defensed and forced a fumble in nine games before sustaining the injury.

Geathers will be a welcome addition to a defensive secondary that has permitted the second most passing yards in the league.

Cal quarterback Jared Goff and North Dakota State signal-caller Carson Wentz are widely expected to come off the board in that order with the top two picks on Thursday night, but there’s some uncertainty about how the next several picks will play out.

After speaking to several people around the league, Tony Pauline of WalterFootball.com takes a shot at forecasting how picks three through eight will go. In Pauline’s view, the most probable scenario would see DeForest Buckner land with the Chargers, Jalen Ramsey to the Cowboys, Myles Jack to the Jaguars, Laremy Tunsil to the Ravens, Ronnie Stanley to the 49ers, and Joey Bosa to the Browns.

Ezekiel Elliott is a wild card – if he’s still on the board at No. 8, the Browns could potentially trade down with a team like the Dolphins – but otherwise Pauline’s predictions for the top eight seem entirely plausible. According to the draft scribe, the Chargers feel like they “desperately” need to add a standout defensive lineman, while the 49ers also covet Buckner, so that’s a situation worth watching too.