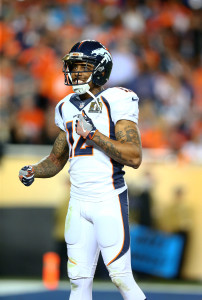 Caldwell, 31, appeared in 14 games last season, catching 10 passes (22 targets) for 72 yards. While he wasn’t one of the primary targets in Denver, he did also have two touchdowns on the year. Before joining the Broncos in 2012, Caldwell enjoyed a more active role on offense with the Bengals. In his three full seasons there – discounting his 7-game rookie season – Caldwell averaged 38 receptions, 365 yards, and two touchdowns per campaign.

In Detroit, Caldwell will compete for time in a group headlined by Golden Tate and offseason pickups Marvin Jones and Jeremy Kerley. Beyond that, the Lions have Corey Fuller, Ryan Spadola, Corey Washington, and Austin Willis on the depth chart. Fuller was retained as an ERFA this offseason while the other three were inked to reserve/futures deals.

Despite all the rumors and news surrounding Adrian Peterson over the offseason, the Vikings running back always felt that he’d return to Minnesota, as he tells Mark Craig of the Minneapolis Star Tribune. “Deep down inside, I always knew I’d be back here,” said Peterson. “I like looking at situations and putting myself in other people’s positions. No way the Vikings were going to let me go.” Peterson will have to run behind a Phil Loadholt-less offensive line, as we learned earlier tonight that the Vikings right tackle tore his Achilles.

Here are today’s minor moves around football, including multiple back-of-the-roster NFL transactions as well as a one-time starting quarterback heading north to the CFL….

The NFL’s waiver period for 2015 officially opened this week after the Super Bowl, which means we should see an uptick in transactions over the next few weeks, even before free agency opens on March 10. Here are Tuesday’s minor moves from around the league:

In addition to tweaking their 53-man rosters in preparation for Week 11’s games, teams around the NFL are also making changes to their practice squads. Here are Tuesday’s practice squad signings and cuts:

2:50pm: The Lions have announced their remaining cuts, per Tim Twentyman of DetroitLions.com. In addition to the players listed below, the following players have been let go:

1:45pm: The Lions have let go of one of Matthew Stafford‘s favorite targets, as Dave Birkett of the Detroit Free Press reports (via Twitter) that the team has released wideout Kris Durham.

The 26-year-old finished 2013 with career-highs in receptions (38) and yards (490). He also led all of the Lions offensive skill players in snaps, even topping All-Pro Calvin Johnson.

The Lions weren’t done there, as they released an additional six players:

11:40am: The Lions’ starting running back from 2012 is no longer on the roster, as the team informed Mikel Leshoure today that he’s being waived as the 53-man cutdown deadline nears, tweets Dave Birkett of the Detroit Free Press. While the move leaves a little dead money on Detroit’s cap, the team avoids having to pay the running back his non-guaranteed base salary for 2014.

Leshoure wasn’t the only veteran among the Lions’ cuts today. Here’s the complete running list: