“This is the hard part right now is what’s going on in the league,” Rivera said. “I think some of these contracts are unbelievable as far as what I’m seeing and hearing.”

Word is that the Panthers may not be willing to go above $15MM/year for their standout defensive tackle. Cox, meanwhile, will average nearly $17.2MM per season on his new deal with a great deal in the way of guarantees early on in the pact. 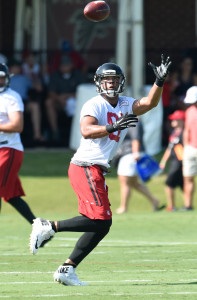 We’ll use this space to round up Tuesday’s minor transactions from around the NFL, starting with a former third-round pick finding a new home. Any additional updates will be listed at the top of the page throughout the evening. Here’s the latest:

Here are some minor transactions from today. Additional roster activity will be logged here, added to the top as usual:

Although the Browns did manage a 23-13 victory against the Raiders yesterday, and in doing so, kept pace with the rest of a highly competitive AFC North, it’s not all good news coming out of Cleveland. Per Terry Grossi of ESPN.com (Twitter link), the team has placed defensive end John Hughes on injured reserve/designated to return after he suffered an MCL injury in Sunday’s contest. The Browns filled the open space on their 53-man roster by claiming tight end Ryan Taylor off waivers from the Ravens, according to Aaron Wilson of the Baltimore Sun (on Twitter).

Now that’s he been slapped with the IR-DTR tag, Hughes can resume practicing in six weeks, and return to game action in eight. Therefore, Hughes will only be able be to play in Cleveland’s Week 17 game against the Steelers, as well as the playoffs (if Cleveland makes the postseason). A Cincinnati product, Hughes has played in 35 games since being selected in the third round of the 2012 draft. He’s started two games this season, and graded out as the league’s 15th-best 3-4 defensive end among 49 qualifiers per Pro Football Focus (subscription required). The loss of Hughes won’t help a Browns defense that already ranks 25th in DVOA, but perhaps former first-round pick Phil Taylor, who will presumably see more snaps in Hughes’ absence, can help fill the void.

Taylor, 26, was a seventh-round pick by the Packers in 2011. After being waived by Green Bay in early October, he was picked up by Baltimore; he was waived once again on October 25. Taylor has been more of a special teams contributor during his career, as he’s caught only eight passes for 45 yards. The fact that the Browns claimed him is interesting, as it could signify that Jordan Cameron won’t be available for Sunday’s game against the Buccaneers after suffering a concussion yesterday.