The 49ers announced that they have signed cornerback JaCorey Shepherd. Shepherd will take the place of cornerback Chris Davis, who was placed on injured reserve with a knee injury. 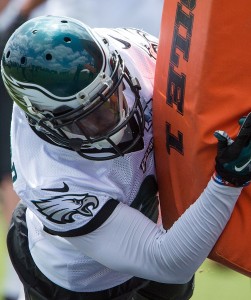 The signing reunites Shepherd, a 2015 draft pick of the Eagles, with coach Chip Kelly. In college, Shepherd started out as a wide receiver but didn’t find his footing until he was turned into a defensive back as a sophomore. As a junior, Shepherd had 45 total tackles, including two tackles for a loss, and ten pass deflections, putting him on the map nationally. His stats dropped a bit as a senior, but he still showed enough to become a late draft pick.

Davis, a cornerback/kick returner, was forced out of Thursday night’s game against the Cardinals. He was initially listed as questionable for this Sunday against the Bills, but he is now likely done for the season.

The 49ers have placed running back Mike Davis on the injured reserve list with the designation to return, the team announced today in a press release. Davis may be the last player this season to get that designation, since anyone placed on IR-DTR after this week wouldn’t be eligible to return in the second half of the regular season.

In addition to moving Davis – who can return for Week 17 – to IR-DTR, the Niners also placed safety L.J. McCray on season-ending injured reserve. To fill the two newly-opened spots on the 53-man roster, San Francisco promoted a pair of cornerbacks, Marcus Cromartie and Chris Davis, from the team’s practice squad.

As Eric Branch of the San Francisco Chronicle points out (via Twitter), it makes sense for the 49ers to promote multiple cornerbacks to their active roster due to the injury problems they’re having in the secondary. Cornerbacks Tramaine Brock (shin), Kenneth Acker (concussion), and Keith Reaser (ankle) are all listed as questionable for Sunday’s game against Atlanta.

The Niners have also seen their backfield ravaged by injuries, having placed Davis on IR-DTR after sending Reggie Bush to the IR list earlier this week. The team signed veteran backs Shaun Draughn and Pierre Thomas to fill in for this weekend’s contest.

The Chargers are the latest team to officially announce their cuts down to 75 players, and the team’s four Tuesday moves involve a handful of injured players. According to a press release, San Diego has waived/injured the following four players:

Each of those players will have to pass through waivers unclaimed in order to remain with the Chargers’ organization. Assuming they do, they’ll revert to San Diego’s injured reserve list.

Having trimmed their roster to 75 players, the Chargers will now have to make 22 more moves in order to get down to a 53-man roster by Saturday afternoon.

As part of their NFL training camp tour, SiriusXM NFL Radio was on location at Chargers camp tonight, and spoke with several key members of the team, as well as general manager Tom Telesco and head coach Mike McCoy. The decision-making duo shared a few interesting comments, which we’ll round up below (all links via SiriusXM’s Twitter):

The Chargers have become the latest team to announce the undrafted free agents they’ll add to their 90-man roster. Here’s the list of players headed to San Diego, courtesy of a team release:

The Texans continue to do their due diligence on every player near the top of the draft board, as they’re set to host Texas A&M offensive tackle Jake Matthews for a visit this week, according to Ian Rapoport of NFL.com (via Twitter). Mike Florio of Pro Football Talk suggests that the Texans’ myriad pre-draft visits with top prospects could be designed to keep teams guessing about which player Houston actually wants, laying the groundwork to potentially trade down from No. 1. Meanwhile, Rapoport adds (via Twitter) that Matthews will visit the Falcons before heading to Houston later in the week for his Texans visit.

Here are a few more miscellaneous draft notes, as we inch a little closer to May 8: