The Colts announced that they have signed tight end Chase Coffman. The deal could be a sign that tight end Dwayne Allen will be out for an extended period of time. 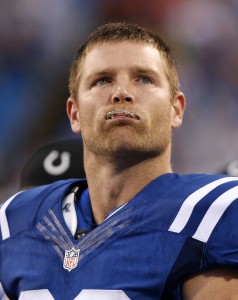 Allen suffered a sprained ankle during Sunday night’s disappointing loss to the Texans. Officially, Allen is “week-to-week,” but it doesn’t sound like we should expect to see him suit up on Sunday against the Titans. For however long Allen is out, Coffman will provide depth at tight end behind Jack Doyle and Erik Swoope.

The good news is that Doyle has been having a strong year and should be able to capitalize on additional targets while Allen is sidelined. On Sunday, Doyle caught all four of his targets for 53 yards and one touchdown. His best game this year came in Week 3 against the Chargers when he caught six passes for 65 yards.

Updates from earlier today can be found here. The latest…

Earlier tonight, we learned that the Ravens hosted former Browns first-round pick Phil Taylor for a workout on Tuesday. However, he wasn’t the only notable NFL veteran auditioning today. Here’s a roundup of today’s workouts from around the league: