After declaring that he was interested in returning to the NFL in 2016, Knowshon Moreno stated that he’d like to play for the Broncos or the Dolphins, the only two clubs he’s ever spent time with during his career. At least one of those teams doesn’t appear to be an option, as Barry Jackson of the Miami Herald reports that Miami doesn’t have any interest in signing Moreno. 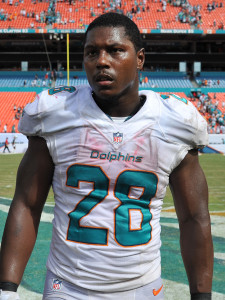 “I still have a lot in the tank. Probably too much in the tank. I need to let it out. I’m really excited to get back. I just want to get back to a team atmosphere, helping a team and, most of all, just competing,” Moreno recently told TMZ.

Miami may not have any interest in Moreno, but that doesn’t mean the club is ending its search for another running back, as recent reports have indicated that the Dolphins are still monitoring free agent Arian Foster, presumably waiting to get a better read on his health. Earlier today, I listed the Dolphins as one of eight teams who could express interest in Foster.

Free agent running back Knowshon Moreno is eyeing an NFL return and would like to sign with with either the Broncos or Dolphins, according to Nicki Jhabvala of The Denver Post. Moreno spent the first five seasons of his career in Denver before inking a free agent contract with the Dolphins in 2014. After suiting up for just three games with the Dolphins, Moreno suffered a season-ending ACL tear – the second torn ACL of his career – and sat out the 2015 campaign to enable his ailing knees to heal. Moreno insists he’s healthy now, though.

“I plan on coming back,” he told TMZ. “I feel good. I feel healthy. I’m fully recovered. So I’m just doing the things I have to right now, just staying in shape and seeing where that goes.”

While the soon-to-be 29-year-old is interested in another go-around with the defending Super Bowl champion Broncos, who 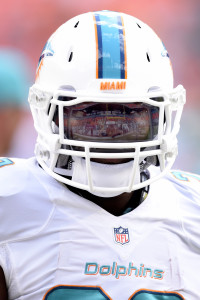 took him in the first round of the 2009 draft, it’s unknown if the feeling is mutual. As noted by Jhabvala, the Broncos re-signed rushers C.J. Anderson (four-year deal) and Ronnie Hillman (one-year contract) earlier in the offseason, and Kapri Bibbs, Juwan Thompson and fourth-round rookie Devontae Booker round out their depth chart.

“I still have a lot in the tank. Probably too much in the tank. I need to let it out. I’m really excited to get back. I just want to get back to a team atmosphere, helping a team and, most of all, just competing,” he told TMZ.

During the first six years of his career, Moreno missed 33 of a possible 96 regular-season games, but he did fare well when healthy. In Moreno’s most productive season, 2013, he amassed 1,038 yards on 241 carries (4.3 YPC, the same as his career mark), chipped in an impressive 60 catches and added 13 touchdowns (10 rushing, three receiving). Cumulatively, Moreno has rushed for 3,616 yards, hauled in 158 passes and piled up 36 scores (27 rushing, nine receiving).

MAY 24: Moreno himself took to Twitter today to say that he does plan to return to an NFL field in 2016. That doesn’t necessarily mean that Klis’ report below was incorrect, as the 9NEWS scribe specifically noted that Moreno might change his mind. Additionally, there’s no guarantee that any club will have interest in Moreno even if he does follow through with a comeback.

MAY 14: Running back Knowshon Moreno hasn’t handled an NFL carry since Week 5 of the 2014 season, and it doesn’t sound like he’ll be returning to game action anytime soon. According to Mike Klis of 9NEWS, Moreno is “80 percent” committed to retirement, but the veteran back is staying in shape in case he changes his mind.

After a solid 2013 campaign during which Moreno topped 1,000 yards rushing and scored 10 touchdowns for the Broncos, he garnered surprisingly little interest on the free agent market, ultimately signing a one-year, ~$3MM contract with the Dolphins. Moreno managed only 31 carries Miami before tearing his ACL, and was placed on injured reserve in October of 2014. Per Klis, Moreno took the 2015 season off in order to let his knees heal.

Moreno will be 29 years old when the 2016 season begins, so it’s hard to imagine that he’d generate much interest even if he were open to playing. There haven’t been any rumblings about Moreno in the past year, as he hasn’t been mentioned on PFR since March 2015. Regardless, if Moreno does decide to officially retire, the former first-round pick will have posted a largely successful career, rushing for more than 3,500 yards and scoring 36 times.

Knowshon Moreno‘s first season with the Dolphins has come to an early end, with the team announcing today that the running back has been placed on season-ending injured reserve due to an ACL injury (Twitter link). The move clears room for defensive lineman Derrick Shelby, whose reinstatement was reported yesterday and officially confirmed by the Dolphins today (Twitter link).

Moreno, 27, suffered an elbow injury early in the season which sidelined him for several weeks before he returned to the field this past Sunday against the Packers. However, he didn’t stay healthy for long, and his latest issue will mean he appears in just three games during the 2014 season, including two that he left early due to injuries. Lamar Miller will continue to act as Miami’s primary back, while Daniel Thomas figures to see occasional carries as well.

When Moreno signed with the Dolphins back in March, he agreed to a one-year deal, so it’s possible this is the last we’ve seen of him in a Miami uniform. Given the typical recovery timetable for a torn ACL, Moreno figures to still be recovering when 2015 free agency opens in March, so the former first-round pick may be hard-pressed to find a new home immediately, though he may come at a bargain price later in the offseason.

Here at Pro Football Rumors, we tend to stay away from injury news and report instead on issues concerning player movement, transactions, etc. However, when there is a major injury to a star player, the potential roster impacts of such an injury are readily apparent. As such, we will update this post with those injuries from Week 2 that could significantly alter a team’s personnel decisions going forward.

Brett Keisel is excited to return to the Steelers, and the defensive end isn’t concerned about his role for this upcoming season. Instead, he’s focused on helping the team, particularly the rookies.

“To be back and to be able to hope to help lead some of these guys and help these guys turn into pros and accountable pros, I’m excited about it,” Keisel told Alan Robinson of the Pittsburgh Tribune-Review.

“I’ve felt since about March, when I decided I still wanted to play football, that something would happen. I hoped it would be here, and for a long time … nothing happened, nothing happened. It was kind of weird like, ‘What am I going to do now?'”

So, after having started in each of his 110 games since 2006, will the veteran welcome a reduced role?

“We really didn’t get into that too much. They just said, ‘We want you back.'”

Buried underneath the news of Shaun Suisham‘s contract extension, Triblive.com’s Mark Kaboly notes the Steelers have been talking with agent Drew Rosenhaus about a contract extension for offensive tackle Marcus Gilbert, who is in the final year of his rookie deal. Gilbert “always possessed the natural talent to excel in the NFL,” writes Ray Fittipaldo in the Pittsburgh Post-Gazette. “Now, he believes he has developed the off-field habits that will help him take the next step in his career.”

Read on for several more AFC news and notes:

Darrelle Revis was the star acquisition of the Patriots‘ offseason, and now he is the star of their training camp, writes Ben Violin of the Boston Globe. Revis intercepted two Tom Brady passes, and broke up a third. Violin was also impressed by fellow cornerback Logan Ryan and rookie tailback James White.

Here are some more links from around the AFC East: