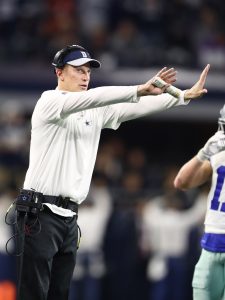 The AAF will kick off in February, meaning that Hackenberg has likely exhausted all present options in the NFL. Hackenberg never saw the field in his two seasons with the Jets and failed to hook on with the Raiders after an offseason trade brought him to Oakland. After that, he lasted only a few weeks on the Eagles’ 90-man roster and his stint on the Bengals’ practice squad ended when he was released earlier this month.

Hackenberg became Penn State’s all-time leader in passing yards (8,457) and touchdowns (48) after three years on campus. His stats did not jump off of the page and he completed just 53.5% of his passes in his final collegiate season, but NFL teams were enamored by his size and pro-style experience in 2016. Jets GM Mike Maccagnan reached for him at No. 51 overall and that gamble never paid off.

AAF contracts probably include an out clause for NFL offers, so Hackenberg and the league’s other players could conceivably get back into the NFL in the second half of the season.

The Colts are planning on starting quarterback Jacoby Brissett on Sunday against the Cardinals, sources tell NFL.com’s Ian Rapoport (on Twitter). Scott Tolzien, who started for the Colts in Week 1, will head to the bench. Ben Volin of the Boston Globe (via Twitter) hears that Brissett was actually informed of the team’s decision on Monday. 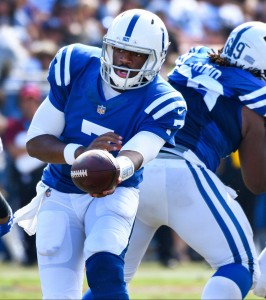 The Colts were criticized this offseason for not upgrading their backup QB situation. Right around the 53-man cutdown deadline, the Colts acquired Brissett from the Patriots in exchange for wide receiver Phillip Dorsett. Brissett was supposed to be Tolzien’s backup while Andrew Luck recovered from injury, but Tolzien’s putrid performance in the season opener has vaulted Brissett into the starting job.

Earlier this week, Colts coach Chuck Pagano admitted that he was thinking about starting Brissett.

“He’s got a sense of calm to him, poise,” Pagano said of Brissett. “Obviously, you love his physical traits, he’s a big man. He can see over things. … Been there before, so obviously it’s not too big.”

Tolzien went 9-of-18 in the season opener for 128 yards and two interceptions. He was also sacked four times. Brissett was called in at the end and completed two of three passes for 51 yards.

The Colts made it official that Andrew Luck won’t be on the field for them Sunday in Week 1, making the game against the Rams the franchise’s first opener without its franchise passer since 2011.

However, Luck is not exactly a lock to return to the field in time for Week 2, Ian Rapoport of NFL.com notes (video link). The NFL insider adds the rest of September is not certain for Luck, reporting some believe this absence will extend into October.

The Colts are exercising extreme caution with Luck in hopes of not having to see the quarterback go through right shoulder trouble again, Rapoport reports, adding there is perhaps a “strong possibility” Scott Tolzien receives more than one start and possibly more than two or three. Mike Wells of ESPN.com reports (on Twitter) Luck is still without a timetable for a return to practice.

Being removed from the PUP list would point to Luck returning at some point early in the season, but Indy’s September slate — which features a trip to Los Angeles and home tilts against the Browns and Cardinals — could feature a Tolzien-fronted operation. Luck has been out since January because of shoulder surgery.

In Luck’s 10 games out of the lineup over the past two years, the Colts are 6-4. But the since-retired Matt Hasselbeck was responsible for five of those victories.

Peyton Manning Not An Option For Vikings

Peyton Manning has no interest in coming out of retirement to play for the Vikings, a source tells Mike Florio of Pro Football Talk. Presumably, Manning wouldn’t re-enter the league to quarterback any club given that he left the NFL on top, but Minnesota is in especially dire straits after Teddy Bridgewater tore his ACL and suffered knee damage earlier today. 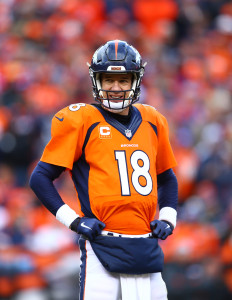 While Manning isn’t an option for the Vikings, Alex Marvez of FOX Sports (Twitter link) throws out Colts backup quarterback Scott Tolzien as a potential trade target for Minnesota given that offensive coordinator Norv Turner was (at one point) a fan of Tolzien. Turner has never coached Tolzien, so it’s possible that the veteran play-caller liked Tolzien’s college tape. However, a trade is unlikely at this point, per Marvez.

As it currently stands, the Vikings have veteran Shaun Hill on the depth chart. Hill offers experience, but he is an uninspiring starting option for a team with playoff aspirations. He also has never started more than 10 games in any given season. Other than Hill, the Vikings have Wisconsin product Joel Stave on the depth chart. Fellow signal-caller Taylor Heinicke has been placed on the NFI list with an injury.

A cursory glance at our list of NFL free agents shows that veteran options such as Matt Flynn, Michael Vick, and Charlie Whitehurst are available, as is former Viking Tarvaris Jackson. T.J. Yates, meanwhile, was recently cleared to return to action after recovering from a torn ACL.

MARCH 11, 5:39pm: Tom Silverstein of the Milwaukee Journal Sentinel reports (on Twitter) that Tolzien’s deal is for two years, and Silverstein writes that he doesn’t expect Tolzien to have to fend off a prospective rookie for the Colts’ No. 2 job.

5:17pm: The Colts and Scott Tolzien have agreed to a deal, owner Jim Irsay tweets. It looks like Andrew Luck‘s backup quarterback 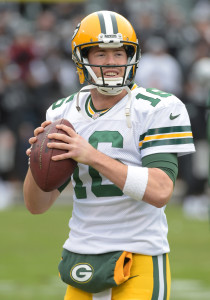 will indeed be much younger, and Tolzien jumps from sitting behind Aaron Rodgers to a role as Luck’s understudy.

The Colts had a visit with former Dolphins backup Matt Moore scheduled for Monday, according to ESPN.com’s Adam Schefter (on Twitter). It’s not known at this time whether they’ll keep that appointment. Former Dolphins coach Joe Philbin now resides on the Colts’ staff, but Indianapolis may already have Matt Hasselbeck‘s successor in mind.

Originally a 2011 UDFA of the 49ers’, Tolzien served as Rodgers’ backup for the past three seasons, going 0-1-1 as a starter. However, when Rodgers missed several games due to injury in 2013, Tolzien was replaced by Matt Flynn and hasn’t started a game since. The 28-year-old career reserve threw one touchdown pass and five interceptions in relief of Rodgers in 2013.

Tolzien threw one pass in the past two seasons for the Packers. Luck’s backups needed to do a lot more than that during a disappointing Colts season. Hasselbeck served as Luck’s backup for the past three seasons but retired this week to accept and ESPN analyst position.

If Colin Kaepernick leaves for the Broncos, Browns, or Jets, Ed Werder of ESPN.com (on Twitter) expects 49ers head coach Chip Kelly to have serious interest in Robert Griffin III. RG3 has already been connected to the Broncos, but it sounds like this week’s game of quarterback musical chairs could put the Baylor product in San Francisco instead.

Here are the latest QB rumors:

We’ll keep track of any minor moves that are made over the course of the day right here:

It has been a little over a month since Rams owner Stan Kroenke announced his plan to build a new NFL stadium in Los Angeles, and it’s inching a little closer to becoming a reality, writes David Hunn of the St. Louis Post-Dispatch. According to Hunn, developers have begun to clear land and lay water lines at Hollywood Park in Inglewood, and the stadium still looks like a go, regardless of whether an NFL team like the Rams is lined up to play in it.

“If you have the most modern, the most beautiful NFL stadium in the world, you’re not going to have any problem populating it,” Inglewood mayor James T. Butts said. “If the NFL wants to migrate here, we would welcome it. But that’s not what this is about. This is ‘Field of Dreams’ stuff. Build it and they will come.”