Former Colts running back Zurlon Tipton was killed in an accidental shooting, according to WJBK in Detroit. Tipton was 26 years old. 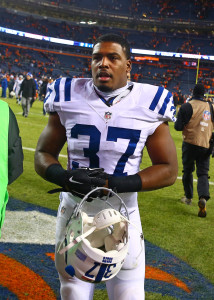 Police say Tipton pulled into a service bay at a Michigan car dealership this morning and went to take a duffel bag out of his trunk. The duffel bag had two guns inside, according to the police report, and one of the guns accidentally went off, which led to Tipton being shot in the stomach. Tipton was able to converse with people around him as he was being placed in an ambulance, but he later died at the hospital.

Tipton had an unfortunate history with guns. In December of last year, he was arrested on charges of criminal recklessness with a deadly weapon after he reportedly went to his girlfriend’s home and shot a round from a Colt AR-15 rifle into the house. Reportedly, Tipton’s then girlfriend asked him to protect her as she was receiving threatening texts from an ex-boyfriend. Even though shots were fired in her home, the ex-boyfriend was apparently not there.

Tipton joined the Colts as a UDFA prior to the 2014 season. He was waived by the team on December 21, 2015, just prior to the aforementioned arrest. In his two seasons with the Colts, Tipton appeared in 16 games and rushed for 38 yards off of 15 carries.

We here at Pro Football Rumors extend our heartfelt condolences to Tipton’s family.

Before you call it a night on this Christmas, here are a few other stories circulating regarding AFC teams.

A third consecutive season for running back Ahmad Bradshaw had ended with the Colts placing him on injured reserve, as the team announced today in a press release. With Bradshaw’s season over due to a wrist injury, the Colts have re-signed running back Zurlon Tipton to their 53-man roster.

Bradshaw, 29, saw his 2013 season end early because of a neck injury, and was placed on IR in 2014 after breaking his leg. This year, he didn’t join the Colts until mid-October, but just a few weeks later, he’s heading back to IR. In limited action in Indianapolis this season, the veteran back ran for 85 yards on 31 carries, adding 64 more yards and three touchdowns on 10 receptions.

Because he was on a one-year contract with the Colts, Bradshaw will be eligible for free agency this winter, and may have played his last snap for the team. Of course, having signed multiple contracts with Indianapolis in the past, the Marshall product could return in 2016, but his growing injury history figures to make the club wary of another reunion.

Tipton, meanwhile, was cut last week when the Colts claimed Boom Herron off waivers. Now, he’ll rejoin a backfield that features Herron and Frank Gore, and will likely be third on the depth chart heading into Week 13.

Boom Herron will return to Indianapolis after his former team claimed him on waivers following his departure from Buffalo, Adam Schefter of ESPN.com reports (via Twitter).

The Colts cut running back Zurlon Tipton in a corresponding move. Herron emerged on waivers Wednesday after the Bills cut him following a four-game stint.

Herron served as the Colts’ passing-down back last season following Ahmad Bradshaw‘s season-ending injury. Now, he’ll team with a healthy Bradshaw to give the team more experience behind Frank Gore, who left Sunday’s game with an injury but returned to practice today.

A fourth-year former sixth-round pick of the Bengals’, Herron carried the ball 11 times for 37 yards for the Bills and caught three passes for 20 yards. He resided as a deep backup in Buffalo, however, behind LeSean McCoy, Karlos Williams and Anthony Dixon.

The 26-year-old Herron totaled 524 yards from scrimmage on 99 touches last season, one that featured a key role for him once Bradshaw went down. He made significant postseason contributions, however, starting all three of the Colts’ games, scoring twice and gaining 298 yards from scrimmage.

With Bradshaw now active again after being re-signed midway through this season, Herron’s workload doesn’t figure to be substantial in his second stay in Indianapolis.

The 25-year-old Tipton played in 13 games for the Colts the past two seasons, filling in mostly on special teams. A former undrafted free agent, only has 12 career carries on his resume.

It’s Saturday, and that means ESPN.com’s NFL writers are opening their mailbags and answering questions from readers. Let’s start off with notes from the AFC…