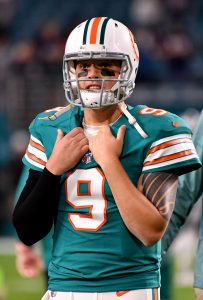 The Dolphins have claimed quarterback Bryce Petty off of waivers, Field Yates of ESPN.com tweets. Petty was released by the Jets on Thursday, exposing him to the waiver wire. 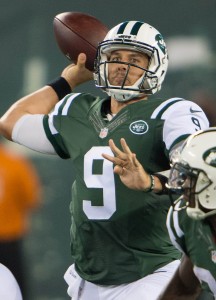 Petty was the victim of a number’s crunch in New York. The Jets are already committed to two QBs between No. 3 overall pick Sam Darnold and veteran Josh McCown while Teddy Bridgewater and Christian Hackenberg are among those battling for the final quarterback job.

The Dolphins, meanwhile, were in need of an extra arm for camp behind Ryan Tannehill, Brock Osweiler, and David Fales. Petty, who has one season left on his rookie contract, had some buzz behind him heading into the 2015 draft, so the Dolphins are at least curious to see what he can offer.

The Baylor product has gone 1-6 in seven NFL starts and is a career 53.1 percent passer with four touchdown passes against ten interceptions. The Dolphins have assumed Petty’s original rookie contract, which has one year remaining.

After a 2017 offseason where the Jets’ then-top quarterback prospect couldn’t land the starting job, the latest New York centerpiece passer is believed to have a decent chance of doing that despite a clear bridge plan in place.

With Christian Hackenberg relegated to afterthought status, Sam Darnold will assume center stage, beginning with the Jets’ rookie minicamp this weekend. However, the plan of the soon-to-be 21-year-old rookie starting his career as Josh McCown‘s understudy may be tenuous.

Some at Jets headquarters believe Darnold showing the Jets what they think he will stands to give him a great opportunity to be the team’s starter from the outset, Manish Mehta of the New York Daily News reports.

While it’s obviously early to speculate how advanced Darnold will be in Jeremy Bates‘ system by September, the Jets are ecstatic Darnold fell to them at No. 3 and will be ready to hand him the keys if he shows enough progress in his first NFL offseason.

Todd Bowles didn’t rule out a then-to-be-determined rookie starting in Year 1, and Mehta notes this won’t be a redshirt season for Darnold. The USC product will “absolutely” take over as the starter this season, just as Mitch Trubisky and Deshaun Watson did last season. And it might be a quicker-than-expected ascent.

As for Hackenberg, the former second-round pick has been working with passing coach Jeff Christensen this offseason, per Mike Garafolo of NFL.com (video link). The Penn State product’s passing motion has reportedly been improved, Adam Caplan of ESPN.com tweets, adding that the reason Bryce Petty was cut and not Hackenberg was due to the latter’s second-round pedigree.

Hackenberg could now be battling Teddy Bridgewater for the No. 3 job. He still has two years left on his rookie deal while McCown and Bridgewater are signed to one-year contracts. This could impact the competition, along with Bridgewater’s health.

The Jets have released quarterback Bryce Petty, a source tells Manish Mehta of the Daily News (on Twitter). The Jets tried to find a trade for Petty before and during the draft, but could not find a suitable deal.

The Jets simply had no room for Petty, who will turn 27 in May. No. 3 overall pick Sam Darnold and veteran Josh McCown are locks for the team while Teddy Bridgewater and Christian Hackenberg are battling for the final spot on the QB depth chart.

Petty has one season left on his rookie contract. He’s 1-6 in seven starts and a career 53.1 percent passer, having thrown four touchdown passes compared to 10 interceptions.

Petty had some buzz behind him in 2015 when the Jets used a fourth-round pick on him, so it stands to reason that he’ll garner attention elsewhere. But, given his lack of on-field success, it’s hard to see him getting significant guarantees in any deal he signs.

For the second straight year, teams are contacting the Jets about a potential trade for Bryce Petty. While Ian Rapoport of NFL.com notes the Jets resisted previous offers in 2017, they are more open to moving the fourth-year quarterback now (Twitter link).

Teams have made pitches to the Jets for Petty, per Rapoport, and a deal would make sense given that the franchise now has Sam Darnold in the fold and five quarterbacks on its roster. With the Jets extremely unlikely to bring all five to training camp, at least one and possibly two, will have to go between now and then. And Petty may be the likeliest drop candidate.

Sam Darnold and Josh McCown are locks for Gang Green’s 53-man roster, with Teddy Bridgewater‘s position contingent upon his health. Petty and Christian Hackenberg are the wild cards here, with the former having been the previous option as the injury replacement when maladies befell Ryan Fitzpatrick in 2016 and McCown last season. However, Petty’s auditions have mostly gone poorly. So, it wouldn’t bee a surprise to see the Jets move him.

The soon-to-be 27-year-old quarterback has one season remaining on his rookie contract. He’s 1-6 in seven starts and a career 53.1 percent passer, having thrown four touchdown passes compared to 10 interceptions.

As the Jets prepare to reconvene on Monday for their first day of the offseason program, here’s where their quarterback situation stands — both in terms of veterans and the player they’re eyeing at No. 3.