Calvin Pace is still not ready to retire. The 35-year-old wants to continue playing and would love an opportunity to return to the Jets, according to Rich Cimini of ESPN.com. 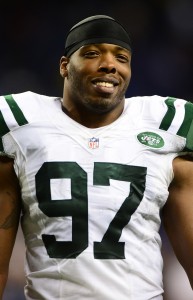 At this time, it’s unclear if the feeling is mutual for the Jets. Back in May, coach Todd Bowles indicated that the door was still open for Pace to return to the team. Months later, however, there hasn’t been any word of the Jets trying to lure Pace back to the team. The Jets are also in the midst of a youth movement at linebacker. However, it should be noted that third-round rookie Jordan Jenkins is dealing with a calf injury and if the injury lingers, Gang Green could theoretically have some interest in a vet like Pace.

Pace, 36 in October, has been with the Jets since 2008 and appeared in every regular season game for them from 2011-2015. Last season, Pace recorded only three sacks and 22 total tackles for the Jets, but he is a savvy player who already knows Bowles’ playbook.

The team has also exercised the options on pass rushing linebackers Calvin Pace and Jason Babin. Each of those options come with a roster bonus of $250K, according to Cimini (via Twitter).

The decision to release Johnson will give the Jets an extra $3.5MM in cap space this offseason, writes Manish Mehta of the New York Daily News (via Twitter). He notes that the team was already planning on having between $45MM-$50MM in cap space to work with.

Although the team has exercised the options on both Babin and Pace, that does not guarantee either a spot on the roster in 2015, writes Cimini (via Twitter). Both linebackers are 34, and pass rusher will likely be considered a position of need for the Jets.

It’s long been assumed that the Patriots would not pick up Darrelle Revis‘ 2015 option as it would mean carrying the cornerback’s $25MM cap charge next season. However, the idea of New England exercising the option has been gaining traction, and Joel Corry of CBSSports.com (Twitter links) passes along how the contract’s guarantees would be structured. Per Corry, Revis would be entitled to a $12MM roster bonus on the first day of the 2015 league year. The bonus would be paid in four $3MM installments, with payments coming on March 31, October 31, December 31, and March 31 of 2016.

Zach Links and Rory Parks contributed to this post.

Manish Mehta of the New York Daily News (via Twitter) tells Bills fans to keep an eye on free agent linebacker David Harris, a favorite of new head coach Rex Ryan. Mehta says Ryan will also want to make a play for outside linebacker Calvin Pace, if the Jets cut him loose. More on the Bills, who are suddenly one of the most intriguing teams to watch for 2015..

Jets head coach Rex Ryan has cleaned out his office at One Jets Drive, reports Dom Cosentino of NJ.com. With the team set to finish the season no better than 4-12, most fans and pundits believe that it will be Ryan’s last game with New York.

Team owner Woody Johnson has hired Charlie Casserly to serve as a consultant, likely in an effort to help him to hire replacements for both Ryan and general manager John Idzik.

Here are some other notes from around Jets camp:

As Todd Archer of ESPN.com writes, Brandon Weeden may have been the biggest beneficiary of Kyle Orton‘s absence from the Cowboys’ spring workouts, but it’s worked out for Caleb Hanie as well. The quarterback, who drew interest from Dallas in 2008 before he signed with the Bears as an undrafted free agent, is competing for a roster spot and isn’t going to let Orton’s presence – or lack thereof – at training camp affect his approach.

“If he’s here, I’ll notice,” Hanie said. “If he’s not, I don’t worry about that. I just worry about what I can do and control and see how it goes from here.”

Ryan Fitzpatrick‘s contract details with the Texans have been reported by Aaron Wilson of the Baltimore Sun (via Twitter). Fitzpatrick’s deal is worth $7.2MM with $4MM guaranteed, and included $2.25MM in bonus money. Next year’s 3.25MM base salary is not guaranteed.

Here are some other contract details from around the NFL:

TUESDAY, 6:01pm: The Jets officially announced the signing via Twitter.

SUNDAY, 2:57pm: The Jets have re-signed veteran linebacker Calvin Pace, according to Mike Florio of Pro Football Talk. The deal is for $5MM over two years.

Pace, 33, originally signed withe Jets in 2008, after spending the first five seasons of his career with the Cardinals. He was released in February 2013, but subsequently re-signed in April to a one-year contract. He had something of a comeback season in 2013, starting all 16 games and accruing 10 sacks and 37 tackles. According to Pro Football Focus’ advanced metrics, he struggled in pass rushing, but excelled in coverage.