Released by the Eagles in February, Chris Maragos will opt to retire after spending nine seasons in the NFL. The 32-year-old safety/special-teamer spent his career with the 49ers, Seahawks and Eagles. 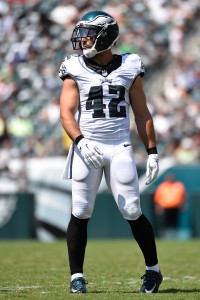 In that time, Maragos won two Super Bowl rings — with the 2013 Seahawks and ’17 Eagles. He announced Tuesday (on Twitter) that a knee injury, and subsequent surgeries, influenced him to cut his career short. He still logged 99 regular-season games since 2010. Overall, Maragos underwent three procedures on his injured knee, including a third this offseason, Tim McManus of ESPN.com tweets.

Maragos finished the Eagles’ championship season on IR, being placed on the injured list in mid-October 2017. A knee injury caused that trip, as well as Maragos beginning last season on the Reserve/PUP list. He remained with the Eagles in 2018 but did not play.

A UDFA out of Wisconsin and Western Michigan, Maragos played one season in San Francisco before joining the Seahawks as they ascended to the NFL mountaintop. He played in each of Seattle’s three playoff games to close out the 2013 season and registered a solo tackle in Super Bowl XLVIII. From there, Maragos caught on with the Eagles as a free agent in 2014 and became the team’s special teams captain. In his first Eagles season, he finished with a career-high 14 stops.

The Eagles released veteran defensive back Chris Maragos, according to Field Yates of ESPN.com (on Twitter). Maragos was once a standout special teamer for Philly, but it appears that he is no longer in their plans. The veteran was scheduled for free agency in March, so the transaction basically gives him a head start on his job search.

Maragos, 32, has been in the NFL for eight years and has spent the last four years with the Eagles. He never lit up the stat sheet as a special teams specialist, but he was considered to be an important locker room figure and a difference-maker in the third facet of the game.

Maragos was limited to just six games in 2017 thanks to a lingering knee injury and spent all of 2018 on the PUP list. It’s not immediately clear whether Maragos will look to play elsewhere or retire.

Eagles defensive back Chris Maragos has agreed to a reworked deal that will eliminate the 2019 season of his contract, according to Field Yates of ESPN.com (Twitter link).

It’s unclear if Maragos gave up anything financially in order to hit free agency a year earlier than was previously scheduled. Maragos was due a base salary of $1.75MM in 2018, and Yates reports Maragos will now earn “up to” $1.75MM this season, so it’s possible the veteran defender agreed to a lower salary with incentives that can bring him back to even.

Maragos had been set to earn a $2MM base salary in 2019, but that figure will now be removed from the Eagles’ books next season. As part of a three-year, $6MM extension he inked in 2016, Maragos received a $1MM signing bonus, which prorated onto his salary cap charges. As such, Philadelphia is still responsible for Maragos’ $250K in 2019 bonus money.

Maragos, 31, ended last season on injured reserve with a PCL issue, and his lengthy recovery has forced him on to the physically unable to perform list. He hasn’t participated in any of the Eagles’ training camp sessions or preseason games, and it appears that he’ll remain on PUP to begin the regular season. That designation would force Maragos to miss at least six games to begin the 2018 campaign.

The Eagles are placing safety Chris Maragos on injured reserve, the team announced. The knee injury is a season-ender, so we will not see him back on the field in eight weeks. To fill his roster spot, the team has signed fifth-round rookie Nate Gerry off of the practice squad.

“It’s hard. Not only a great football player, but a great person, great man,” head coach Doug Pederson said (via NJ.com’s Eliot Shorr-Parks). “Great leader on the team in the locker room…next man has to step up and fill that role.”

Maragos – the Eagles’ special teams captain – contributed primarily in the third facet of the game. Without him, Pederson says the team will have to rely on others in the special teams mix to step it up. That group includes safety Corey Graham, running back Corey Clement, and safety Jaylen Watkins, according to the coach. The Eagles can also be expected to sign someone to fill his spot on the roster.

Maragos is under contract in 2018 for $2MM, but the team can save $1.5MM in cap space by cutting him. Though he is a vital special teamer, the injury could put his Philly future in flux.

Before signing a three-year, $12MM deal with the Jets in free agency last March, running back Matt Forte also drew interest from the AFC East rival Patriots, he told Connor Hughes of NJ.com Wednesday. The Pats’ attempt to woo him came too late, however. “My agent told me they called. I asked if they talked about anything, and he said they just wanted me to come for a visit,” said Forte. “I said I’m already here about to sign, so, I didn’t feel like that would be right.”

Forte has been productive in his age-30 season (911 total yards, eight touchdowns), but the 3-7 Jets are out of playoff contention and the 8-2 Patriots are the division’s top team. Statistically, New England’s No. 1 back, bargain signing LeGarrette Blount, is having a better season on the ground than Forte. Blount has piled up 802 rushing yards (compared to Forte’s 732) to go with a slightly superior per-carry average (4.0 to 3.9) and 12 scores.

The Eagles and safety Chris Maragos have agreed to a three-year contract extension, per a team announcement. Financial details aren’t yet available, but the deal will keep Maragos under Philadelphia’s control through the 2019 campaign. 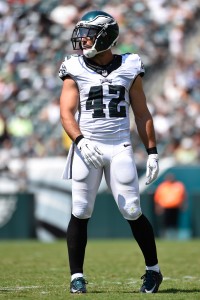 Maragos, a seven-year veteran who’s in his third season with the Eagles, is solely a factor on special teams. The 29-year-old Maragos has taken the field for just one defensive snap this season, but he has seen action in 79.6 percent of the Eagles’ special teams plays and made a club-high eight tackles. Thanks in part to Maragos, the Eagles’ ST unit is the NFL’s best, per Football Outsiders.

The Eagles have agreed to terms on a contract for safety and special teams standout Chris Maragos, reports Adam Caplan of ESPN.com (Twittter link). According to Caplan, Maragos’ new deal will be a three-year pact worth $4MM, with $1MM guaranteed, and could max out at $5.3MM due to incentives (Twitter link).

Caplain notes (via Twitter) that several teams were in the mix for Maragos, including the Redskins.

The latest from D.C..