After spending five years with the Lions, versatile defender Miles Killebrew will join the Steelers. The special-teamer committed to Pittsburgh on a one-year deal Saturday, Ian Rapoport of NFL.com tweets.

This signing would seemingly be for a special teams role, with Killebrew playing less than 90 snaps on defense over the past three seasons. Last year, the former safety played just one defensive snap.

A former fourth-round Lions pick, Killebrew has missed just two games throughout his career. While the Southern Utah alum has only started four games in five seasons, the Lions valued him for his special teams acumen. Even after his role on Detroit’s defense evaporated following his second season, Killebrew continued to make 53-man rosters as a niche player.

Detroit re-signed Killebrew on a one-year, $2MM contract in 2020, but with a new regime having arrived, the soon-to-be 28-year-old safety/linebacker will depart.

The February release (and subsequent retirement) of Glover Quin, in theory, should have put safety Miles Killebrew in line for an elevated role in 2019. But, instead of moving from the bench to the starting lineup, ESPN.com’s Michael Rothstein believes that he could be on the roster bubble. 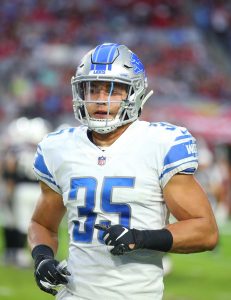 “Killa” has shown bursts of promise while providing valuable special teams help, but he has yet to make a major mark on defense. Even without Quin, the Lions have other safety options from which to choose, including Quandre Diggs, Tavon Wilson, third-round rookie Will Harris, and rising sophomore Tracy Walker.

Killebrew’s practice performance in the coming weeks may dictate his NFL future. There are a number of potential outcomes, ranging from a starting gig at free safety alongside Diggs to a release that could expose him to the waiver wire just prior to the start of the season. There’s also the in-between that could sting the player even more than getting cut – Killebrew could be relegated to a special teams/reserve role yet again as he enters the final year of his paltry rookie contract.

If Killebrew can’t break through this summer, his best outcome might be a release and an opportunity to flex his hard-hitting style elsewhere.

The Lions have officially locked up nearly all of their draft class, along with a dozen undrafted free agents, the team announced today in a pair of press releases. The most notable name in the group is Ohio State offensive tackle Taylor Decker, who was Detroit’s first-round pick, but the team has also signed eight other draftees to go along with its 12 new UDFAs.

And here are the 12 undrafted free agents who signed contracts with the Lions:

There’s growing buzz around Michigan State offensive tackle Jack Conklin, according to Matt Miller of Bleacher Report, who tweets that Conklin is getting top-10 consideration. Meanwhile, Jason Cole of Bleacher Report (video link) suggests that there are some coaches around the NFL that prefer Conklin to Notre Dame’s Ronnie Stanley, who is generally considered the draft’s second-best tackle after Laremy Tunsil.

Still, while Tunsil is viewed as the top tackle – and perhaps even the top player – by many teams around the NFL, there’s not a complete consensus on that. NFL Network draft analyst Mike Mayock (Twitter link) suggests there has been some “momentum” for Stanley to go in the top 10, perhaps even before Tunsil. While that seems unlikely, Ian Rapoport of NFL.com adds (via Twitter) that teams aren’t all set yet.

Here are a few more draft rumors and updates from across the league: