Set to hold their rookie minicamp next weekend, the Falcons want to move quickly and get their entire draft class signed this week, Vaughn McClure of ESPN.com reports. The Falcons have informed the agents representing these rookies they want the class signed by Friday, per McClure. This would continue a pattern of expediency for the defending NFC champions. Atlanta was the first team to reach agreements with its entire 2016 draft class. The Falcons have not signed any of their six picks yet. Division rival Carolina, which held its rookie camp this weekend, beat them to the punch by signings its entire seven-man haul. With 20 teams set to hold their rookie camps next weekend, signings should soon accelerate since they’re no longer especially complicated negotiations.

Here’s the latest from the NFC South on the first rookie minicamp weekend.

Former Eagles wide receiver Riley Cooper will try out for the Buccaneers during their rookie camp, according to ESPN.com’s Adam Caplan (on Twitter). Cooper, 29 in September, has not been heard from since he was released by Philly more than a year ago. 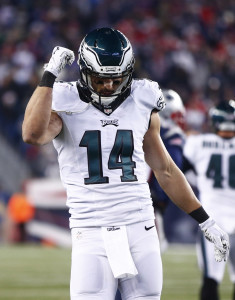 At this stage, it sounds like Cooper may have to settle for a one-year, non-guaranteed pact and it’s no certainty that he can make the Bucs’ roster. Cooper was a favorite of former Eagles head coach Chip Kelly, but coach Doug Pederson & Co. didn’t hold him in the same esteem. Not long ago, Cooper signed a five-year, $25MM deal with the team that included $10MM in guarantees. Now, he’s on the fringe of the NFL.

Cooper’s best season came in 2013 when he established new career-highs in receptions (47), receiving yards (835), and receiving touchdowns (8). He followed that up with a decent 2014 season (55 catches, 557 yards, three touchdowns), but his targets decreased by more than 50% in the following season.

The Eagles announced that they have released Riley Cooper. Today (Monday, February 8th) is the first day that teams can release players per the NFL’s calendar and Cooper has become the league’s first such roster casualty. More moves are sure to follow from teams all around the NFL.

Cooper, 29 in September, was a favorite of former head coach Chip Kelly. The new regime, apparently, didn’t hold him in the same esteem. Cooper’s deal had no remaining guaranteed cash on it from 2016 onward, so there will be no fiscal penalty for Philly.

Roughly two years ago, the Eagles and Cooper reached agreement on a five-year deal worth $25MM overall and $10MM in guaranteed cash. Cooper closed out his rookie deal in style with a breakout season in 2013. After being at the center of a preseason controversy when he used a racial slur, Cooper got positive attention by setting career-highs in receptions (47), receiving yards (835), and receiving touchdowns (8). The $5MM annual average of the deal was not chump change, but that was roughly what he was expected to command had he reached the open market.

In 2014, Cooper recorded a career-high 55 receptions for 577 yards and three scores. This past season, he played a much smaller role in the offense, catching only 21 passes for 327 yards and two scores.

Cooper would have carried a $5.3MM cap hit in 2016 and the Eagles saved $2.9MM against the cap by releasing him.

In the wake of Tom Coughlin‘s departure, a report indicated that the Giants could consider their in-house assistants for the head coaching job, but offensive coordinator Ben McAdoo looks like a much more viable possibility than defensive coordinator Steve Spagnuolo. As Paul Schwartz of the New York Post writes, Spagnuolo is more likely to be one-and-done during his second stint as the Giants’ DC.

McAdoo, on the other hand, is viewed as a future head coach by Giants co-owner John Mara, who “sees a lot of Tom Coughlin in him,” an NFL source tells Ralph Vacchiano of the New York Daily News. One league source who spoke to Vacchiano suggests McAdoo will likely be a head coach somewhere within the next two or three years, meaning the Giants could have to decide this winter how much they like him. As the source puts it: “Do you want him coaching for you, or against you?”

While the Giants ponder that question and consider other possibilities for their head coaching job, let’s round up several more items from out of the NFL’s East divisions….

While many observers have predicted that the Giants will replace head coach Tom Coughlin at season’s end, those who know co-owner John Mara “are convinced” he doesn’t want to fire Coughlin and is no lock to do so, writes Ralph Vacchiano of the New York Daily News. As Vacchiano points out, Mara and fellow co-owner Steve Tisch could come up with several compelling reasons to keep Coughlin around, including a desire to maintain stability and a lack of star candidates to replace him.

As we wait to see how the Giants finish the season and how that affects Coughlin’s future in New York, let’s check in on a few other items from around the NFC East….

The Vikings lost another key member of their offensive line today, as Phil Loadholt is finished for the season with a torn pectoral. Despite the injuries, coach Mike Zimmer isn’t panicking (via Craig Peters of Vikings.com)…

“I think Phil is a great person,” Zimmer said. “He’s very conscientious, works hard, he’s got a great heart. So, that’s just part of football. Obviously we’ll miss him but we’re not going to let it hold us back from what we’re trying to get done.

That’s just the way it goes. That’s how things happen and you’ve just got to keep playing.”

The Eagles could possibly look to trade receiver DeSean Jackson, according to Jimmy Kempski of CSNPhilly.com. Kempski is clear that the team will not actively shop Jackson, but if another team called with interest, “the Eagles certainly wouldn’t laugh and hang up.”

Jackson is entering the third year of five-year, $47MM deal he signed in March 2012. The star receiver, who enjoyed the best season of his career in 2013 in Chip Kelly’s new offense, has had contract squabbles before, including this year, leading a team source to state that a new pact was unlikely. According to Kempski, Jackson’s attitude has rubbed some in Eagles headquarters the wrong way, and his personality may run counter to the type of “locker room culture that Chip Kelly is trying to cultivate.” Additionally, fellow receiver Jason Avant had acted as something of a buffer between Jackson and receivers coach Bob Bicknell; Avant, however, is expected to be released.

There is also a disconnect between recent comments by Eagles general manager Howie Roseman and the team’s roster construction. The team recently re-signed both Riley Cooper and Jeremy Maclin, and is now second in the league in wide receiver investment, something Roseman might be concerned about. “We’re trying to figure out the whole dynamic of it,” said the GM. “You can only put a limited amount of resources at a particular position before it starts taking out from other places.”

Still, a trade of Jackson does seem unlikely. He is a great fit in Kelly’s scheme, with his ability to both stretch the field and act as a weapon on short out patterns. He ranked as the seventh-best receiver by both Pro Football Focus’ and Football Outsiders’ metrics. The Eagles, meanwhile, would be relegated to relying on the one-year sample size of Cooper, and, in Maclin, a player coming off of a torn ACL. In the event of Jackson’s being made available, there would certainly be a market for his services, with the 49ers among his potential suitors, according to Matt Maiocco of CSNBayArea.com.

As the Seahawks said goodbye to receiver Sidney Rice and defensive lineman Red Bryant, they said hello to approximately $12.8MM in savings, freeing the defending Super Bowl champions to be active participants in upcoming free agency.

Bob Condotta of The Seattle Times reached out to cap expert Jason Fitzgerald of OvertheCap.com, and Fitzgerald offered a plethora of knowledge, shining light on the possible plans of GM John Schneider in the coming months.

Offensive tackle Jason Peters, center Jason Kelce, and wide receiver Riley Cooper have all reached long-term contract agreements with the Eagles this week, and the details of those deals have slowly become public over the last couple days. Here’s a quick breakdown of how the three contracts look: