It’s official. Chargers left tackle Russell Okung will run for NFLPA president, as Ken Belson of the New York Times writes. If Okung wins, he could change the complexion of the ongoing labor talks and, potentially, steer the league towards a labor stoppage. 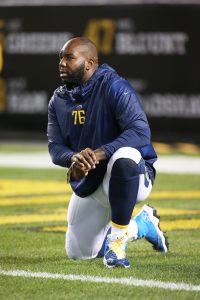 The owners and players have been discussing a new deal based upon the framework of an expanded 17-game regular season. Okung has been vocal in his opposition of the proposal and says that a labor stoppage might be necessary to get the best possible deal for the union.

“Are we in an equitable agreement with management?” Okung said. “Right now, the answer is no. This will take as long as it needs to…I expect more, and I’m not willing to be bashful about saying that. I’ve made it really clear we need to exhaust every single opportunity we have in order to put our players in a better situation to take care of themselves, their families and to protect the future of this game.”

Okung is far from the only player who doesn’t want a 17-game season. A source familiar with the negotiations tells Mike Florio of Pro Football Talk that an extended regular season, which will likely come with expanded playoffs, remains a very difficult sell for the league’s players. A reduced preseason isn’t much of a selling point for them, as fewer and fewer vets are playing in the preseason anyway. John Clayton of 710 ESPN Seattle confirms that there is not enough player support for a 17-game schedule (Twitter link).

It’s worth noting that Okung has been at odds with his own union in the past. An independent investigation found that Okung spread confidential information in violation of union rules as a member of the Executive Committee. Okung, for his part, denies any wrongdoing and says he’s the union’s best bet to push back against the rigors of an expanded season.

“We can’t neglect those issues in order to get more money,” Okung said. “Am I going to trade health and safety for a buck?”

The league will elect its next president in March. Eric Winston, the incumbent, is not eligible for another term because he is two years removed from playing. 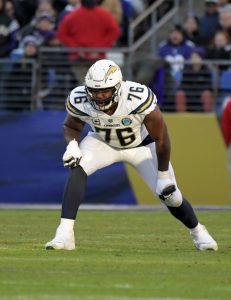 Okung battled blood clot issues for several weeks and began this season on the Bolts’ NFI list. After returning to practice earlier this month, the 10th-year left tackle will soon be back in action. This represents some rare good news for the Chargers on the injury front.

The Bolts have used second-year UDFA Trent Scott at left tackle in all seven games this season. Okung, 32, obviously represents a notable upgrade and will begin his third season in this post. The former top-10 pick started 15 games for each of the past two Chargers teams, making the Pro Bowl in 2017. His return comes for a Chargers team that’s been ravaged by injuries at nearly every position, helping lead to a 2-5 start.

A second-round pick, Adderley only played 10 defensive snaps this season. The Delaware product has missed the past three Bolts games. He has dealt with a hamstring injury and will now have the chance to rehab and prepare for his sophomore NFL campaign. Adderley will join fellow safeties Derwin James and Adrian Phillips on IR. Both are candidates to return this season, James in particular.

The 2020 NFL Draft is still a long way away, but it’s never too early to start talking about it. LSU quarterback Joe Burrow wasn’t on too many people’s radars heading into this season, but that’s changed dramatically. The Tigers’ offense has been way better than anybody expected, and Burrow has been the main reason why. Regarded by many as a potential Day 3 pick entering the year, it appears his draft stock has been skyrocketing.

In fact, draft analyst Matt Miller of Bleacher Report said in a tweet that he has Burrow ranked as his number two quarterback, and his number seven player overall. Miller goes so far as to say that at “that grade he’s probably a top five pick.” The Tigers are still undefeated, and the Ohio State transfer has been nearly flawless. If you’re a fan of a team tanking for a quarterback, it sure sounds like you should start watching LSU games closely.

Russell Okung To Return To Practice

A Chargers team again ransacked by injuries received a boost Thursday. After missing the first six games of the season due to a blood clot issue, Russell Okung returned to practice. The veteran left tackle also agreed to an adjusted contract, according to NFL.com’s Ian Rapoport (on Twitter).

The revised deal will allow the 10th-year blocker to earn all of his $13MM salary this season. His salary would have been reduced otherwise, due to his stay on the Bolts’ NFI list. The Chargers have 21 days to determine if Okung will return to game action this season. If Okung remains on Los Angeles’ NFI list by that point, he will revert to season-ending IR.

Okung, who has hired agent J.I. Hatsell after years of going without representation, reached an agreement with the Chargers to see all of his $13MM (per Rapoport, on Twitter). A portion of Okung’s 2019 salary would not previously have been available under the previous circumstances.

This will provide a boost for the Chargers, who have endured frequent trouble up front this season. Mike Pouncey is now out for the year, joining many key unavailable Bolts.

Los Angeles had been using UDFA Trent Scott at left tackle. Scott suffered an injury as well. While it’s not certain Okung will be back in uniform Sunday, Thursday’s development is obviously good news for the 2-4 Bolts.

Now that he’s back with the Chargers, running back Melvin Gordon will instantly vault to the top of the club’s depth chart. “He’s our starter. No doubt,” said head coach Anthony Lynn, tweets Field Yates of ESPN.com. “He was our starter for a reason… as soon as Melvin’s ready, he’ll go back. He’ll go back to number one.” Lynn also said backups Austin Ekeler and Justin Jackson will continue to get work, but Gordon will become the No. 1 back. Meanwhile, Los Angeles received a roster exemption for Gordon, per Aaron Wilson of the Houston Chronicle (Twitter link). Gordon’s exemption ends on October 7, so the Chargers don’t technically have to activate him for either Week 4 or 5.

Okung has been dealing with blood clots. A Chargers line that struggled down the stretch last season will now not have one of its anchors. This has obviously become a rather serious situation for Okung, a 2010 first-round pick, and it’s now conceivable he will not play this season.

Los Angeles has third-round rookie Trey Pipkins and second-year UDFA Trent Scott as backup options and could look to waivers for additional help.

Updates have been hard to come by on Chargers left tackle Russell Okung. Okung has been sidelined all offseason, and it’s never been clear exactly what is wrong.

Okung was placed on the NFI list last month with an undisclosed illness, and Chargers GM Tom Telesco said he had been dealing with a “pretty serious medical issue” since June. At the time it was reported that he could miss all of training camp, and that’s exactly what happened. Now we have confirmation that he’ll miss regular season time, as Telesco said recently that Okung will not be ready for Week 1, via Eric D. Williams of ESPN.com (Twitter link).

Further, Telesco said that he’d have “a better update on Okung’s health status in a couple weeks.” It sounds like there’s a good chance Okung isn’t back anytime soon. Obviously this isn’t good news for the Chargers, as they’re looking to follow-up on last year’s strong 12-4 campaign. Los Angeles has already dealt with some tough injury luck, as star safety Derwin James will be sidelined for a few months with a foot issue.

Okung signed a four-year, $53MM deal with the Chargers in 2017, and he made the Pro Bowl that year. He’s started 30 games for them the past couple of years, and his absence will be a huge downgrade to Philip Rivers‘ offensive line. The Chargers will now move forward with Sam Tevi, Trenton Scott, and Trey Pipkins as their top three tackles. None of them are particularly inspiring options.

Russell Okung Could Miss All Of Training Camp

Reports last month indicated that Chargers left tackle Russell Okung was dealing with an undisclosed injury, but that may not be quite accurate. As Eric D. Williams of ESPN.com tweets, the team placed Okung on the NFI listed with an undisclosed illness, and GM Tom Telesco said that Okung started dealing with a “pretty serious medical issue” in early June (via Daniel Popper of The Athletic on Twitter).

Popper adds that Okung could miss all of training camp, though there is no word yet on whether his regular season (or his career) are in jeopardy at this point. Telesco said that the 31-year-old is doing better and getting great care, and Okung plans to provide additional details when training camp opens tomorrow.

If Okung is forced to miss time, it would be a huge blow to the Bolts, who are widely considered to be a legitimate championship contender. Okung earned a Pro Bowl nod during his first year with the Chargers in 2017, and Pro Football Focus graded him as the 11th-best tackle in the league in 2018.

The No. 6 overall pick in the 2010 draft has missed just one regular season game in each of the past two seasons, and he suited up for both of Los Angeles’ playoff contests last year.