The 49ers have brought back a free agent on their defensive line, according to Ian Rapoport of NFL.com, who tweets that Tony Jerod-Eddie has re-signed with the team. Rapoport adds that it will be a one-year, $1.3MM contract. 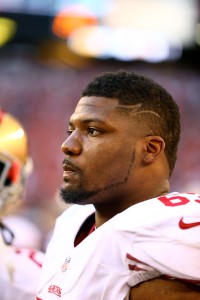 Jerod-Eddie, who turned 26 last week, was eligible for restricted free agency this season, but the 49ers opted to non-tender him rather than issuing him a qualifying offer. Early in the free agent period, a report indicated that, despite not tendering him a contract, the Niners remained interested in re-signing Jerod-Eddie. As it turns out, the team will save a little money by taking this approach, since the Texas A&M alum would have been in line for a $1.671MM tender as a restricted free agent.

Jerod-Eddie was one of seven interior defensive linemen for the 49ers to receive at least 200 defensive snaps in 2015, and according to Pro Football Focus, he received the lowest grade of the group — PFF ranked him 107th out of 123 qualified players at the position. Still, Jerod-Eddie has some value in a part-time role, contributing 14 tackles and four passes defended last season.

The 49ers, who re-signed nose tackle Ian Williams earlier in the offseason, will keep their defensive line from last season essentially intact. The team also brings back Arik Armstead, Quinton Dial, and Glenn Dorsey, among others.