Jordan Todman is adding to his jersey collection once again. The running back/kick returner is signing with the Texans, a source tells Brian Costello of the New York Post (on Twitter). 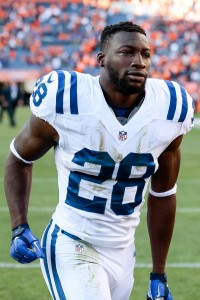 Todman signed with the Jets in June but he was let go earlier this week. He has appeared in games for four different NFL teams over the last six years – not counting cup-of-coffee type stints like he had in New York – but he is hoping to find some stability in Houston.

Most recently, Todman spent the 2016 season with the Colts where he carried the ball only nine times and contributed mainly on special teams. He had 16 kick returns for a total of 478 yards in 2016, giving him a strong 29.9 yards-per-return average. That total includes one spectacular 99-yard return for a touchdown against the Packers in November.

The Texans’ rushing attack will be led by Lamar Miller with support from Alfred Blue and rookie D’Onta Foreman. Akeem Hunt and Tyler Ervin are also fighting for backup RB spots.

The Jets are expected to sign veteran running back/kick returner Jordan Todman, a source tells Adam Caplan of ESPN.com (on Twitter). Terms of the deal are not yet known, but this is likely a one-year pact.

Todman, 27, has bounced around between four teams in six years. Most recently, he spent the 2016 season with the Colts where he carried the ball only nine times and contributed mainly on special teams. Todman had 16 kick returns for a total of 478 yards in 2016, giving him a strong 29.9 yards-per-return average. That total includes one spectacular 99-yard return for a touchdown against the Packers in November. Jets fans looking to forget about their troubles can view the impressive play on YouTube.

The Jets already have a big group of running backs, including main guys Bilal Powell and Matt Forte plus reserves Brandon Wilds, Elijah McGuire (rookie), Brandon Burks, and Romar Morris. As a return specialist, Todman may have a leg up on making the 53-man roster.

Here are today’s minor transactions from around the NFL…

The Panthers have added several role players to one-year deals recently, and David Newton of ESPN.com provides the contract details. Linebacker Jason Trusnik will earn $950K ($80K guaranteed), running back Jordan Todman will get $765K ($20K guaranteed), and receiver Jarrett Boykin will receive $700K ($20K guaranteed). All three will earn slightly more than the minimum required for their respective years of service time.

The Panthers have signed a free agent running back, adding Jordan Todman to their backfield on a one-year deal, the team announced today (via Twitter).

Todman, who turned 25 last month, was selected in the sixth round of the 2011 draft by the Chargers, and spent time in San Diego and Minnesota before landing with the Jaguars. Todman has played for Jacksonville since 2012, totaling 450 rushing yards on 111 carries and 314 receiving yards on 40 catches during his 33 games with the Jags. The Connecticut product is also a special teams contributor, and was Jacksonville’s primary kick returner in 2014, averaging 25.6 yards on 38 returns.

In Carolina, Todman will join a group of running backs led by Jonathan Stewart and Mike Tolbert. Darrin Reaves and Fozzy Whittaker are also under contract with the Panthers, so Todman will have to fight for a roster spot and for playing time. One player he won’t have to beat out is longtime Panthers back DeAngelo Williams, who was released by the team earlier in the offseason.

We’ll round up Thursday’s minor transactions right here, which today includes a former NFLer signing with a CFL club and an exclusive rights free agent signing his ERFA tender. Any additional minor moves will be added to the top of the list throughout the day: