Not only did the Buccaneers drop a crucial NFC South matchup to the Falcons on Thursday, but they also lost running back Antone Smith and defensive end Howard Jones to season-ending knee injuries, head coach Dirk Koetter announced Friday (Twitter link via Greg Auman of the Tampa Bay Times). 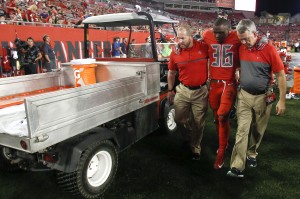 Smith, who signed with the injury-ravaged Buccaneers on Oct. 17, is the latest of their rushers to land on the shelf this year. Starter Doug Martin hasn’t played since Week 2 because of hamstring troubles; his primary complement, Charles Sims, went on injured reserve last month – shortly before Jones’ signing – with a knee issue; and Jacquizz Rodgers sat out Tampa Bay’s 43-28 defeat against Atlanta with a sprained ankle.

With their top three options down, the Bucs turned to Peyton Barber and Smith, who combined for 56 yards on 16 carries. Smith, formerly with the Falcons and Bears, saw action in three games this season and picked up 47 yards on 10 rushes.

Jones, 26, contributed solid production as a first-year player in 2015, racking up 43 tackles and five sacks in 12 appearances (five starts). His output was minimal this year, though, partly because he participated in just 15.8 of the Buccaneers’ defensive snaps. Jones totaled only three tackles in eight games, but he did factor in heavily on special teams with a snap percentage of 50.5.

The Buccaneers have agreed to sign running back Antone Smith, according to Greg Auman of the Tampa Bay Times (on Twitter). Smith, an FSU product, played under coach Dirk Koetter in Atlanta. 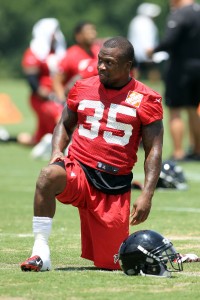 Smith could help fill the gap after running back Charles Sims was placed on IR earlier this month. Alternatively, this could be an indication that Doug Martin will be out for an extended period of time. Martin went down with a hamstring injury last month and it was initially reported that he would miss “about three weeks.” Now, almost four weeks later, Martin has yet to return to the field.

The injuries to the Bucs’ top two runners have thrust another former Atlanta back – Jacquizz Rodgers – into a starting role. Now, Smith will be there in support along with undrafted free agent Peyton Barber. Russell Hansbrough, who was the team’s No. 3 RB this weekend, has been waived (Twitter link via Auman). 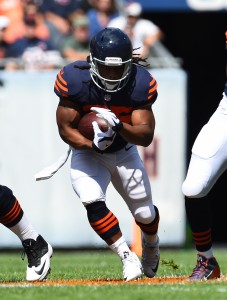 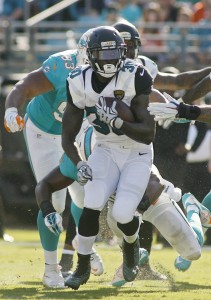 Pierce was signed by the Jets late last month as running back depth, but his hamstring injury kept him from getting on the field and showing what he can do. The 25-year-old appeared in seven games with the Jaguars in 2015 and totaled just six carries for 11 yards. He spent the first three seasons of his career with the Ravens after they used a 2012 third-round pick on him, and he showed significant promise as a rookie. That year, the ex-Temple Owl averaged 4.9 yards per rush on 108 attempts. Pierce added a combined 802 rushing yards the next two seasons in Baltimore, but on a meager 3.3 yards per carry. Had he made the Jets’ roster, Pierce would have had to serve a suspension for the first two weeks of the regular season.

Smith was a big-play specialist for the Falcons in 2013 and 2014, racking up an incredible 289 rushing yards on just 28 carries (10.3 yards per attempt), adding another 232 yards through the air on 15 receptions. Smith found paydirt seven times on his 43 touches. Last year, he appeared in five games for the Bears but recorded only one carry.

A pair of former Falcons running backs were involved in two Bears transactions today. According to the team (Twitter links), Chicago has placed Jacquizz Rodgers on injured reserve due to a broken arm, with veteran free agent Antone Smith joining the Bears’ roster to fill the open spot.

After spending his first four NFL seasons in Atlanta, generally serving as the team’s No. 2 running back, Rodgers signed with the Bears this offseason. However, he got off to a slow start, averaging a career-low 2.9 yards per carry in the early going, and now will be sidelined for the rest of the year with his arm injury.

To replace Rodgers, the Bears added another former Atlanta running back — Smith was a big-play specialist for the Falcons over the last two seasons, racking up an incredible 289 rushing yards on just 28 carries (10.3 yards per attempt), adding another 232 yards through the air on 15 receptions. Smith found paydirt seven times on his 43 touches.

Smith and the Falcons worked out an injury settlement in September after he was cut by the club, allowing him to reach free agency and sign elsewhere.

This week, the Saints and quarterback Drew Brees agreed to a contract restructuring which gave the club a little bit more breathing room in 2015. New Orleans now has $2.6MM in additional cap room this season, but Brees’ cap hit for 2016 has been raised to an eye-popping $30MM, the highest in the NFL. Obviously, Brees is very unlikely to play out ’16 at that rate. The Saints will have to figure out a course of action with the veteran and that could mean an extension or a pay cut, but a trade or release might also be in play.

Here’s more out of the NFC South..

Falcons Mince Roster Down To 52 Players

The Falcons are among the final teams to unveil their regular-season roster, and they did so by leaving one spot open.

Atlanta’s roster now sits at 52 players, one below the limit of 53, according to AtlantaFalcons.com.

The team parted ways with Antone Smith, who reached an injury settlement with the team. Out since the Falcons’ preseason opener with a hamstring injury, the 29-year-old backup did not suit up for the team again and will now avoid injured reserve due to this settlement.

Injury-plagued veteran tight end Tony Moeaki also couldn’t make the roster. The 28-year-old spent last season with the Seahawks before signing on with the Falcons in March. Atlanta will go with Jacob Tamme and Levine Toilolo as its top two tight ends.

Those also cut are as follows:

The Falcons are working on an injury settlement with running back Antone Smith, reports Zach Klein of WSB (ABC-TV) in Atlanta (via Twitter). If the sides can’t come to an agreement, Smith will be placed on the injured reserve.

The former undrafted rookie out of Florida State has bounced around a bit since entering the league in 2009, spending time with the Lions, Vikings, Texans and Falcons. The 29-year-old has 29 career carries for 286 yards and four touchdowns. He also has 15 receptions for 232 yards and three scores.

The speedy back inked a one-year, $1.4MM deal with Atlanta back in March. He was expected to contribute this season with the Falcons, but a hamstring injury limited him throughout the preseason. In addition to Devonta Freeman and Tevin Coleman, the Falcons also have running backs Terron Ward and Jerome Smith under contract.