It’s now official. On Friday morning, Bengals head coach Zac Taylor confirmed that tight end C.J. Uzomah will miss the remainder of the year with a torn Achilles tendon. Uzomah will be placed on injured reserve, freeing up a spot on the club’s active roster. 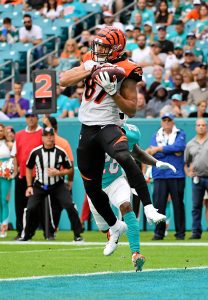 Uzomah seemed on course for a big year after catching eight of Joe Burrow‘s eleven targets for 87 yards and a touchdown. Now, he’ll have to turn his focus to 2021. In the interim, Drew Sample seems poised for a larger role in the offense, and the Bengals will likely look to add another tight end off the bench to join Cethan Carter. Fortunately, the Bengals are rostering two tight ends on their expanded practice squad in Mitchell Wilcox and Mason Schreck.

Through two games, Burrow has been dialed in on Uzomah and wide receiver Tyler Boyd, who has eleven grabs for 105 yards and 1 TD thus far. It’s possible that Sample will absorb all of Uzomah’s would-be looks, and he might be able to capitalize on them in similar fashion. As a rookie last year, Sample registered just five receptions through nine games. Now, he’s looking like more than a blocking TE. Last night, he finished out with seven catches for 45 yards.

The Bengals fear that tight end C.J. Uzomah has torn his Achilles, according to Ian Rapoport of NFL.com (on Twitter). There is at least hope for better news, as the last medical check was inconclusive. After an MRI today, the Bengals will know for sure. 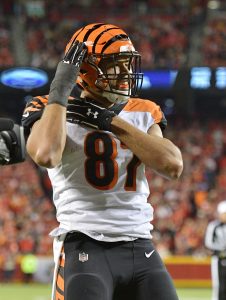 Uzomah was off to a hot start before he was carted off the field on Thursday night. Through two games – or, one game-and-change – Uzomah had eight catches for 87 yards, including last night’s 23-yard second quarter touchdown reception, Joe Burrow‘s first TD throw as a pro.

Uzomah, 27, broke out in 2018 with 43 catches for 439 yards and three scores. After that, the Bengals rewarded the former fifth-round pick with a new three-year, $18MM+ contract. Uzomah’s numbers weren’t as gaudy last year, but he was on course for a big 2020, especially considering his rapport with Burrow.

For now, the Bengals are left with second-year pro Drew Sample as their top tight end. Cethan Carter, a former UDFA out of Nebraska, will move up to the TE2 slot.

Tight end C.J. Uzomah has agreed to terms on a new deal with the Bengals. The fresh pact will be a three-year deal worth upwards of $18MM, according to Ian Rapoport of NFL.com (on Twitter).

Uzomah, 26, set new career highs in catches (43), yards (439), and touchdowns (3) in 2018. The Bengals aimed to keep Uzomah, especially with Tyler Eifert and Tyler Kroft also bound for free agency, and they got a deal done on the first day of the legal tampering period.

Eifert has missed an astounding 34 games since his 2015 Pro Bowl season, but the team reportedly still has some level of interest in retaining him. Kroft also lost time due to injury, but there’s reportedly a path for him to return as well.

Coming into today, fewer than 90 players selected in the 2015 NFL draft remained unsigned, with well over half of this year’s 256 draftees having reached agreements with their respective teams. A few more rookie have struck deals with their clubs today, so let’s round up the latest news, with all contract info coming from Over the Cap:

Having hosted receiver Kevin White for a visit already, the Titans are scheduled to meet with Alabama wideout Amari Cooper next week, according to Jim Wyatt of the Tennessean (via Twitter). While the two players are considered the top two prospects at their position, it would still be a surprise to see either player go as high as No. 2 to Tennessee, so perhaps the team is doing due diligence in case it trades down. Of course, I’d argue that the Titans have multiple positions that are bigger holes than wide receiver, but there’s no harm in exploring every potential option.

Here are more updates on upcoming draft visits, as well as some that have already happened: