The Texans have signed former Eagles punter Cameron Johnston, as Aaron Wilson of the Houston Chronicle tweets. Johnson’s three-year deal is worth $8MM in total and includes a $1MM signing bonus. 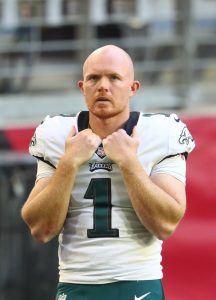 The Eagles opted against giving Johnston a restricted free agent tender this offseason, putting him on the open market this week. The first right of refusal tender would have cost just $2.133MM for the 2021 season. His new Texans deal tops that by a healthy margin on an average annual basis.

Johnston will replace fellow veteran Bryan Anger, who was released by the Texans on Thursday. He’ll look to rebound from a rough year — in 2020, he posted a career-low 41.2 net-yard average. The Eagles could now turn to future/reserve signee Arryn Siposs as his replacement.

We’re going to see a lot of tough decisions being made over the next week, and the Eagles in particular have their hands tied due to a terrible cap situation. Because of their cap issues, Philly isn’t tendering restricted free agent punter Cameron Johnston, a source told Ian Rapoport of NFL Network (Twitter link). It’s a busy day for punters, as this news comes on the heels of the Saints releasing Thomas Morstead.

Johnston will now become an unrestricted free agent that’s free to sign anywhere without the Eagles having the chance to match an offer sheet. Rapoport says that Johnston “should have an active market.” A native of Australia, Johnston came to the United States to go to school at Ohio State after failing to make it as an Aussie Football player.

After getting cut in 2017 he made the roster in 2018, and has been the Eagles’ punter in each of the past three seasons. This move doesn’t mean that Philadelphia won’t still end up bringing him back for 2021, Eliot Shorr-Parks of 94WIP.com tweets.

The Eagles can get their cap space under control and then re-sign Johnston, although now they’ll have to bid against an open market. Johnston has been very solid but not spectacular, so it’s not like he’s going to land an eye-popping deal in a tight free agent market.

While defensive end Brandon Graham is set to be a free agent at the end of the year, it doesn’t appear the Eagles are in any rush to lock him up, writes Eliot Shorr-Parks of NJ.com. Shorr-Parks thinks it’s “unlikely that Graham gets a new deal before the season.” He adds that the ankle injury Graham is currently recovering from may play into the team’s reluctance to get something done this offseason.

Graham has been with the Eagles since he was drafted in the first round by the team back in 2010. Since then, he’s racked up 38.5 sacks, including 9.5 last season. He notably strip sacked Tom Brady in this year’s Super Bowl to help seal the Eagles’ win. Despite his Super Bowl heroics, Shorr-Parks say “all indications still point to Graham becoming a free agent next offseason” rather than receiving an extension.

The Eagles have announced the signings of 10 undrafted free agents, including a pair of previously reported players in former Wisconsin running back Corey Clement and ex-Oklahoma defensive tackle Charles Walker. Here are the other eight: