Derek Barnett will be sticking around Philly through at least the 2021 season. The Eagles will pick up the fifth-year option on the defensive end, reports Jeff McLane of the Philadelphia Inquirer. 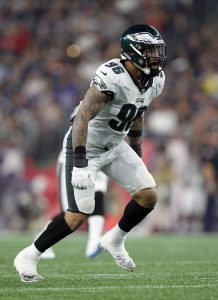 The 23-year-old will see a significant pay increase during his fifth season in the NFL. While he’ll earn $2.2MM in 2020, he’ll see that number jump to at least $9MM in 2021. Last year, a defensive end in Barnett’s draft range (14th overall) would have earned $9.45MM on their fifth-year option, per McLane.

The move isn’t a huge surprise, as the 2017 first-rounder has been productive when he’s seen the field. Barnett compiled five sacks in 15 games as a rookie, and he had the game-clinching fumble recovery during Super Bowl LII.

Core muscle surgery and a torn rotator cuff limited him to only six games during the 2018 season, but he returned and started a career-high 14 games in 2019. He finished this past year with 30 tackles, 6.5 sacks, and two forced fumbles.

At only 23 years old, the Eagles are hoping that Barnett establishes himself as a long-lasting starter opposite veteran Brandon Graham. The Eagles selected defensive end Casey Toohill in the seventh round of last week’s draft.

Eagles defensive end Derek Barnett is done for the season thanks to a serious shoulder injury, a source tells Adam Schefter of ESPN.com (on Twitter). The former first-round pick recorded 2.5 sacks and 17 tackles before his season came to a premature end. 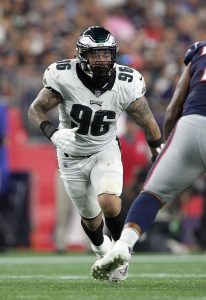 Barnett, 22, was the No. 14 overall pick in last year’s draft. He compiled five sacks, one forced fumble, and two fumble recoveries as a reserve, and had a couple of key moments in the team’s run to a ring last year.

This year, Barnett earned a promotion to the starting lineup and was on his way to a fine follow-up effort. He’ll be missed, but the Eagles have an embarrassment of riches from which to draw from at defensive end. The backup unit includes former Pro Bowler Michael Bennett, Chris Long, and fourth-round rookie Josh Sweat.

The defending champs will face the Jaguars in London on Sunday – sans Barnett – before entering their Week 9 bye.

Guard J.R. Sweezy was only released earlier this afternoon, but speculation is already starting about where he could be heading next. Sweezy made it just two years into the five-year, $32.5MM deal he signed back in 2016 before he was cut by the Buccaneers. Both his years with Tampa Bay were injury plagued, but the interior lineman is still a good player when healthy.

As such, Sweezy should have some suitors despite still being injured as he continues to recover from a broken bone in his leg. A reunion with his former team, the Seahawks, is something that “would make a lot of sense” writes Mike Garafolo of NFL Network (Twitter link). Garafolo adds that he’d be “a natural fit” and that he thinks it’s something the Seahawks will “explore.” There’s definitely some familiarity there and the Seahawks could definitely use some interior line help. It will be an interesting situation to keep an eye on this late in the offseason.

With Eric Reid, Tre Boston and Kenny Vaccaro unemployed after 2 1/2 months of free agency, safety market’s served as a persistent talking about this offseason. One former defensive coordinator attributed this oddity to teams having difficulty placing values on modern safeties due to myriad responsibilities. An agent for a top safety has a darker view of what’s transpiring.

“(Teams) are basically avoiding everyone because they’re ignoring Reid,” the agent told CBS Sports’ Jason La Canfora. “That’s exactly how I am looking at it, absolutely. Our (client) hasn’t done anything like that in his past and neither have most of these guys. But that’s exactly what we think is going on here. They just shut the safety market down entirely, and the guy who got paid, by and large, didn’t make much.

“It’s the most asinine thing I’ve ever seen that you can tell us that this group of safeties aren’t worth signing, period, at this point. And saying maybe some other guys have turned down $2MM or $2.5MM, but we have a pretty damn good safety and we haven’t even seen money like that on the table. I know for our guy, we haven’t had a contract offer at all; not one on paper and only one verbal offer, and that offer was for the league minimum with a split and no guaranteed money. So that’s not even an offer; that’s an insult. For these guys to have no jobs right now you can’t tell me ‘that’s just the market.’ That’s BS.”

“The guy who got paid” is likely Morgan Burnett, the other member of what was viewed by some as the top quartet. The Steelers signed him for three years and $14.35MM — 27th in the league in terms of AAV. Reid currently has a collusion grievance against the NFL pending, but Boston and Vaccaro are both in their primes and have received scant interest. Our Rory Parks asked PFR readers which of these players will sign first, and Vaccaro is winning that vote. Both Reid and Vaccaro appeared on PFR’s original Top 50 Free Agents list.

Add Derek Barnett to the long list of Eagles players who will be recovering from surgery this offseason. Jimmy Kempski of PhillyVoice.com reports that the defensive end underwent sports hernia surgery following his team’s Super Bowl victory. 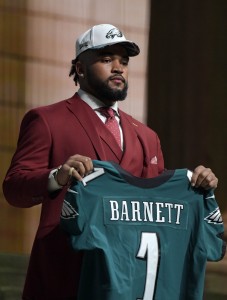 The reporter notes that the recovery period is only six weeks, and the surgery is intended to make the specific area of the body stronger. In other words, Barnett should already be close to full-health.

Following a productive rookie campaign, the 2017 first-rounder is expected to take on a bigger role with the Eagles in 2018. The Tennessee product finished last season with 21 tackles and five sacks in 15 games. He also scooped up a key Tom Brady fumble during the fourth quarter of the Super Bowl. The 21-year-old may start the season behind Brandon Graham and Michael Bennett on the depth chart, but he’ll serve alongside Chris Long as one of the top rotational defensive ends.

The Eagles have had many stars in their journey towards the top of the NFL this season, and one of those players has been rookie defensive end Derek Barnett. The team’s first round pick this past May has given Philadelphia another dominant pass rusher outside of Brandon Graham and has made the front office look even better, opines Geoff Mosher of the FanRags Sports Network.

Mosher points out that Barnett was viewed as the “safe” pick when the Eagles were selecting in the middle of the first round. He states that flashier draftees that the Eagles passed on, like running back Dalvin Cook, defensive end Jonathan Allen and linebacker Reuben Foster, have all had injury problems, making the choice to select Tennessee’s all-time sack leader even more brilliant.

At the moment, Barnett is simply a pass rushing specialist coming off the bench, but has already racked up 4.5 games even without getting the majority of the snaps. He trails team leader Brandon Graham by just 1.5 sacks with six weeks left to play. Barnett may not have been the sexy choice at the time, but he’s making the Eagles decision makers look even smarter because of what he’s adding to an already outstanding roster.

The Eagles have signed their first-round pick, defensive end Derek Barnett, per ESPN’s Adam Schefter (on Twitter). As the 14th selection, Barnett’s four-year contract is worth upward of $12.85MM, including a $7.49MM signing bonus. 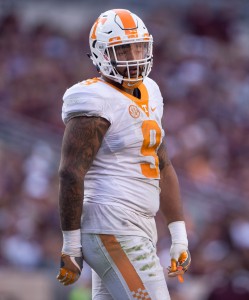 Barnett starred in all three of his years at Tennessee, where he notched 52 tackles for loss and 32 sacks. Last season was his best, though, as Barnett made 19 tackles behind the line of scrimmage and took down opposing quarterbacks 13 times en route to first-team all-SEC honors. Lance Zierlein of NFL.com likens the 6-foot-3, 259-pound Barnett to Packers pass rusher Nick Perry, who posted 11 sacks in 2016.

With Barnett under contract, the Eagles have locked up all eight of their draft picks. Here’s a refresher on their other selections:

The Dolphins have defensive ends Derek Barnett and Charles Harris high on their draft boards, league sources tell Armando Salguero of the Miami Herald, and would consider selecting either with the No. 22 pick.

Miami does have other needs, and could consider other positions in the first round. In PFR’s live mock draft, for instance, I sent Western Kentucky guard Forrest Lamp to South Beach. Indeed, if Barnett and Harris are both off the board by the time the Dolphins’ turn comes around, the club may be open to targeting higher-rated players at positions other than defensive end, per Salguero. Edge rushers such as Michigan’s Taco Charlton and UCLA’s Takkarist McKinley don’t figure to interest Miami as much as Barnett or Harris, and the Dolphins may go another direction if those are the best defensive ends available.

The Dolphins “love” Barnett, as Salguero reported last month, and there’s a chance the Tennessee product could still be on the board at pick No. 22. Barnett posted 33 sacks over the past three seasons, and was a highly productive player at the collegiate level. Doubters, however, point to Barnett’s poor measurables which could indicate a lack of explosion. Harris, meanwhile, is shooting up draft boards after putting up 16 sacks for Missouri from 2015-16. Lance Zierlein of NFL.com compares the 6’3″, 253-pounder to NFL edge rusher Connor Barwin.

While Miami re-signed Andre Branch and extended Cameron Wake this offseason, the club still desperately needs depth at defensive end. Wake is now 35 years old, and the only other pass rushers on the roster aside from Branch are 32-year-old William Hayes and Terrence Fede, the latter of whom hasn’t made an impact in three NFL seasons.

Three quarterbacks are expected to be selected in the first round: Mitch Trubisky (North Carolina), Deshaun Watson (Clemson), and Patrick Mahomes (Texas Tech), according to Todd McShay of ESPN.com (Insider subscription required). Cal’s Davis Webb is also reportedly a contender for a first-round slot, says McShay, though he could fall to the middle of Round 2. Watson, interestingly, has been more lauded by NFL clubs that aren’t in the market for a quarterback, per McShay, as those teams have praised Watson’s leadership ability and other intangibles. Trubisky and Mahomes, meanwhile, are seemingly more attractive to clubs that do need a signal-caller.

Let’s take a look at a few more highlight’s from McShay’s column, which is certainly worth a full read: