END_OF_DOCUMENT_TOKEN_TO_BE_REPLACED

Packers To Work Out Kellen Winslow 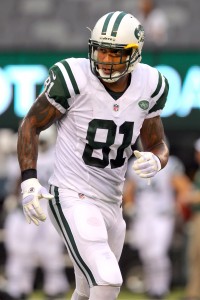 Kellen Winslow has not played in an NFL game since the 2013 season but has remained focused on a comeback, albeit doing so mostly under the radar. But the Packers are set to gauge how far along Winslow is on this return journey by hosting him on a workout on Sunday, Ian Rapoport of NFL.com reports (on Twitter).

This is the tight end’s first audition since he began talk of a comeback, Rapoport notes.

Although it is set for the same day as the Packers’ first preseason game, one set for Canton, Ohio — meaning the workout might not be for a top audience — Winslow receiving such an opportunity at 33 and nearly three full seasons removed from action is noteworthy.

He last contributed as a backup for the Jets in ’13 after a 2012 season with the Patriots that included just one game, but Winslow was one of the league’s better tight ends from 2006-11 with the Browns and Buccaneers. His well-documented injury issues notwithstanding, the former first-round pick in 2004 recorded five 700-plus-yard seasons in that span, including a Pro Bowl effort in Cleveland during the 2007 campaign. How much of this form is left, though, is obviously worth wondering, and Winslow would be competing for a depth spot with Green Bay.

In January, former first-round pick Kellen Winslow tweeted that he was focused on an NFL comeback. The 32-year-old confirmed this sentiment when he appeared on SiriusXM NFL Radio this week.

“My body feels good enough to come back and play at a high level, even better I think because I’m just a little wiser,” Winslow said (via Michael David Smith of ProFootballTalk.com). “It was good to get away from the game just to work on me. I want to be a better player than I was before. I think I can.”

Winslow has caught 469 passes for 5,236 yards and 25 touchdowns during his ten-year career, but he hasn’t played an NFL game since 2013. Let’s check out some more notes regarding some of the league’s notable free agents…

Earlier today, we learned Sashi Brown and Paul DePodesta were seeking a personnel executive for their front office, although they weren’t going to label the position “general manager.” Hickey would presumably be up for that role, as the 44-year-old has spent more than two decades in NFL front offices.

Cabot tweets that former Eagles Director of Pro Personnel Rick Mueller is also on the Browns’ radar for the same position, and former Lions general manager Martin Mayhew is also reportedly a candidate for the job.