After having spent the past couple of seasons in Chicago, Marc Mariani is back in Tennessee. According to Jim Wyatt of TitansOnline.com, the Titans have signed the veteran WR/KR. The team has waived wideout Tre McBride to make the necessary roster spot, tweets ESPN’s Adam Caplan. 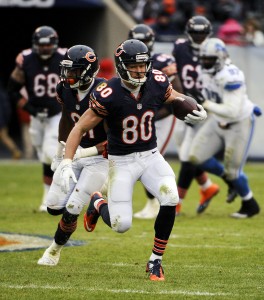 The former seventh-round pick broke onto the scene with the Titans as a rookie in 2010. The returner ended up making the Pro Bowl that season after having collected 27 punts for 329 yards and a touchdown and another 60 kickoffs for 1,530 yards and a touchdown. 2011 was another solid season for Mariani, but injuries kept him off the field in 2012 and 2013.

The receiver was ultimately cut by the Titans, and he landed on the Bears. In 2015, the 29-year-old finished with 29 punt returns for 129 yards, as well as 16 kick returns for 418 yards. Mariani also finished with career-highs in receptions (22) and receiving yards (300). The Bears re-signed the veteran this offseason, but he was cut by the squad this weekend.

McBride, a seventh-round pick out of William & Mary, initially made the Titans roster over former second-rounder Justin Hunter.

The Bears’ busy afternoon continued, with the team announcing (on Twitter) it has re-signed Marc Mariani on a one-year deal.

Mostly used as a kick returner in Chicago, Mariani generated a modest market for himself this week, with the Raiders, 49ers and other teams inquiring about his future.

Mariani signed with the Bears prior to the 2014 season after spending the first four years of his career with the Titans. The 28-year-old wide receiver averaged 26.5 yards per kick return — on 16 returns — last season for the Bears.

A one-time Pro Bowler, Mariani saw by far the most time as a receiver last season, with the Bears besieged by injuries to their receiving corps. Mariani caught 22 passes for 300 yards in 2015 after not catching a single pass from 2012-14.

Before he agreed to terms with Philadelphia, new Eagles linebacker Nigel Bradham also received interest from the Browns, Buccaneers and Jaguars, as he tells Alex Marvez of FOX Sports (Twitter link). Bradham further stated that his former team, the Bills, backed out of contract talks.

Meanwhile, in addition to having lost out on Bradham, the Browns swung and missed on receiver Rishard Matthews, according to Adam Caplan of ESPN.com (Twitter link). Caplan reports that Cleveland was one of several teams in play for Matthews, who agreed to sign with Tennessee on a three-year deal.

In addition to making practice squad changes, teams around the league are also adding and subtracting players from their 53-man rosters today. We’ll round up some of those minor transactions in this space, with the latest moves added at the top of the list:

SATURDAY, 4:29pm : In addition to trading DE Lavar Edwards to the Cowboys, the Titans have announced the following roster moves:

Titans’ head coach Ken Whisenhunt had a lot to say about his team’s performance Friday night, remaining optimistic despite the 31-24 loss to the Saints. Terry McCormick of TitanInsider.com reported many of Whisenhunt’s best statements and responses in a series of tweets.

Here are some of the highlights, as reported by McCormick (all links via Twitter).

Matt Schaub‘s reworked deal with the Raiders includes pay cuts in both 2014 and 2015, according to Tom Pelissero of USA Today (Twitter link), who identifies Schaub’s new cap numbers as $8MM (2014) and $5.5MM (2015). The contract now includes $3MM in performance-based incentives in both 2014 and 2015, but the 2016 season has been totally removed, according to Pelissero (Twitter links). Jason Fitzgerald breaks down the new-look deal in chart form at OverTheCap.com.

Here are a few more contract details from around the NFL: