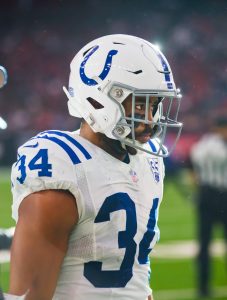 The Colts are signing safety Mike Mitchell, a league source tells Tom Pelissero of NFL.com (on Twitter). Terms of the deal are not yet known, but it’s likely a low-cost one-year pact.

Mitchell was one of several veteran safeties who were victimized by an uncharacteristically slow market for the position this offseason. The Steelers cut him loose in early March and nothing came of his multiple workouts. Mitchell tried out for the Cardinals in July, showed his stuff for the Titans before they signed Kenny Vaccaro, and worked out for the Bears and Bengals in September. Finally, Mitchell has an NFL deal, and it’s with the Colts.

Mitchell, 31, spent the past four seasons in Pittsburgh, where he started each of his 61 games. In 13 games last season, Michell finished with 53 tackles and two passes defended. Pro Football Focus ultimately ranked him 62nd among 87 safety candidates.

The Colts expect to have starting corners Quincy Wilson and Kenny Moore back from their concussion layoffs when they face the Jets on Sunday. Mitchell, meanwhile, will be on hand to provide depth in the middle of the field.

It’s been a quiet offseason for safety Mike Mitchell, but it sounds like the safety got a workout on Monday. NFL.com’s Ian Rapoport reports (via Twitter) that Michell auditioned for the Bears today. The reporter adds that the work out “sounded like it went pretty well.”

After being released by the Steelers in early March, the 31-year-old only had a pair of reported workouts during the offseason and preseason. Michell met with the Cardinals back in July, and the Titans gave him a look before signing Kenny Vaccaro.

Mitchell, 31, had spent the past four seasons in Pittsburgh, where he started each of his 61 games. In 13 games last season, Michell finished with 53 tackles and two passes defended. Pro Football Focus ultimately ranked him 62nd among 87 safety candidates.

With DeAndre Houston-Carson dealing with an arm injury, the Bears are only rostering three healthy safeties in Eddie Jackson, Adrian Amos, and Deon Bush. At the very least, Mitchell could help provide some experience to a relatively inexperienced bunch.

The Titans are looking to evaluate all possible options in the wake of Johnathan Cyprien’s season-ending ACL tear. Former Steelers safety Mike Mitchell will be among the safeties to meet with the Titans and his visit is set for Friday, a source tells Ian Rapoport of NFL.com (on Twitter).

Mitchell, 31, has spent the past four seasons in Pittsburgh, where he’s started each of his 61 games. Mitchell appeared in 13 games this past season, finishing with 53 tackles and two passes defended. Pro Football Focus ultimately ranked him 62nd among 87 safety candidates. He’s not a world-beater, per se, but he does offer a great deal of experience and could be a fit for the Titans’ defensive scheme.

It has been a quiet offseason for Mitchell on the whole, but he did meet with the Cardinals in late July.

Cardinals To Meet With Mike Mitchell

Former Steelers and Panthers safety Mike Mitchell is scheduled to visit with and take a physical for the Cardinals on Wednesday, a source tells Adam Schefter of ESPN.com (on Twitter). If he signs, the deal would reunite Mitchell with Steve Wilks, who was the Panthers’ defensive backs coach during his best career season in 2013.

The 31-year-old has spent the past four seasons in Pittsburgh, where he’s started each of his 61 games. Mitchell appeared in 13 games this past season, finishing with 53 tackles and two passes defended. Pro Football Focus ultimately ranked him 62nd among 87 safety candidates.

Mitchell was slated to carry a $5MM salary in 2018, which was not workable for the Steelers given their limited room. Given the nature of the free agent safety market this offseason, a deal with the Cardinals would be for considerably less.

The Cardinals’ secondary will look quite different this year without Tyrann Mathieu moving between safety and cornerback. Mitchell, if signed, would serve as a backup behind Antoine Bethea and Budda Baker.

While Mike Mitchell is set to test the open market, a return to Pittsburgh is still in the cards. Tom Pelissero of NFL.com reports (via Twitter) that coach Mike Tomlin and general manager Kevin Colbert spoke to the veteran safety today and expressed interesting in bring him back in 2018. While Mitchell is planning on hitting free agency, Pelissero notes that the “door remains open.” The veteran was released by the Steelers earlier this week.

The 30-year-old has spent the past four seasons in Pittsburgh, where he’s started each of his 61 games. Mitchell appeared in 13 games this past season, finishing with 53 tackles and two passes defended. Pro Football Focus ultimately ranked him 62nd among 87 safety candidates.

Mitchell was slated to carry a $5MM salary in 2018, which was not workable for the Steelers given their limited room. The safety will have to compete with a deep free agent class and declining skills in pursuit of a new deal, but he should be able to find work as a veteran presence in the secondary. The Steelers could apparently be that team, as Mitchell would realistically be an upgrade over some of their current options, including Robert Golden and J.J. Wilcox.

The Steelers are expected to release Mike Mitchell next week, a source tells Ian Rapoport of NFL.com (on Twitter). They remain open to bringing him back a reduced salary, however.

Mitchell was slated to carry a $5MM salary in 2018 which was not workable for the Steelers given their limited room. His so-so season at free safety didn’t help matters either. Mitchell missed three games last season and ranked as just the No. 62 safety in the NFL, according to Pro Football Focus. At the same time, he was Pittsburgh’s highest-rated safety, per PFF, which underscores their need in the secondary.

Mitchell has been a starter for Pittsburgh over the last four years and, up until last year, he had never missed a game in black and yellow. He’ll attract interest from other teams, but his age (31 in June) and the depth of the free agent safety market may work against him.