Teams have until March 17 to extend tender offers to their restricted free agents and exclusive rights free agents. . Some teams are already making their calls in advance of March 17. We’ll keep tabs on the latest here:

The Steelers have designated rookie outside linebacker Olasunkanmi Adeniyi to return from injured reserve, according to Curtis Crabtree of Pro Football Talk. 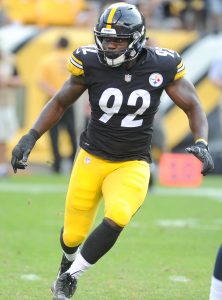 Adeniyi played three seasons as Toledo before entering the 2018 draft with a year of eligibility remaining. Last year, Adeiniyi played in 14 games for the Rockets and posted 8.5 sacks, 20 tackles for loss, and three forced fumbles on the way to being named second team All-MAC. In his pre-draft profile of Adeniyi, Lance Zierlein of NFL.com called the now-21-year-old a “high effort player” who nonetheless lacks exceptional athletic talent.

Pittsburgh thought enough of Adeniyi’s work during the preseason to keep him on its initial 53-man roster, a move that now makes him eligible to return from injured reserve. Now that Adeniyi is back at practice, the Steelers have a three-week window during which they must either activate Adeniyi, or leave him on IR for the remainder of the season.

The Steelers don’t necessarily need any help on the edge, as they rank first in the NFL in sacks and second in pressure rate. Adeniyi, if activated, would likely serve as depth behind T.J. Watt, Bud Dupree, and Anthony Chickillo while also playing on special teams.

The Steelers are now the second club to announce their crop of 2018 undrafted college free agents: