Kirk Cousins Will Miss Game This Week On COVID List

According to a tweet from ESPN’s Adam Schefter, Vikings’ quarterback Kirk Cousins has tested positive for COVID, moving him to the COVID-19/reserve list and ruling him out for this weekend’s matchup in Green Bay. Tom Pelissero, of NFL Network, was told that Cousins experienced symptoms, self-reported, and test positive (Twitter). Because Cousins is symptomatic, he is not affected by the new rule change shortening the isolation requirements for players who test positive but prove to be asymptomatic. The rule change will make it easier for Cousins to return to the facility once his symptoms subside, though.

Backup quarterback Sean Mannion was on the COVID-19/reserve list after testing positive on Sunday. The remaining quarterbacks on the roster are Kyle Sloter and the rookie out of Texas A&M, Kellen Mond.

Neither quarterback has seen playing time in the NFL. Kellen Mond was drafted in the third round of the 2021 NFL Draft and has been sitting on the active roster as a reserve. Kyle Sloter went undrafted in 2017 and was signed by the Denver Broncos. In the preseason, Sloter impressed completing 31 of 43 pass attempts for 413 yards while throwing 3 touchdowns and no picks. His passer rating of 125.4 in the preseason led a rookie class that included Mitchell Trubisky, Patrick Mahomes, and Deshaun Watson. Sloter was nonetheless cut before the season started and has since bounced around on multiple NFL practice squads. He spent the tail-end of the 2019 NFL season on Detroit’s active roster, but never saw a down of football. Sloter was signed to the Vikings’ active roster only three days ago, when Mannion was placed on the COVID list.

The silver lining for the Vikings comes from a tweet by ESPN’s Minnesota Vikings’ Reporter, Courtney Cronin, who is expecting Mannion to be activated off of the reserve/COVID-19 list today and start this weekend with Mond backing him up. This was confirmed by NFL Network reporter Ian Rapoport as the move was made official. 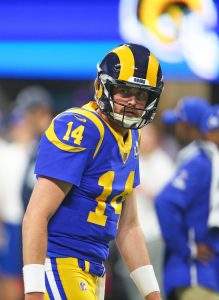 Sean Mannion is returning to Minnesota. Kirk Cousins‘ former backup will rejoin the Vikings but do so as a member of their practice squad. This comes a day after the Seahawks cut the veteran reserve.

Minnesota was linked to re-upping Mannion earlier this year but opted against doing so, leading the former third-round quarterback pick to Seattle this summer. The Seahawks, however, released Mannion to clear a roster spot for Jake Luton on Wednesday.

The Vikings selected Kellen Mond in this year’s third round, but the Texas A&M product can be viewed as a project. The team has only Cousins and Mond on its active roster. Mannion represents veteran insurance in the event of a Cousins injury or other unavailability this season. Teams can have up to six vested veterans on their 16-man practice squads this year.

A former Rams draftee, Mannion signed two one-year deals with the Vikings over the past two years. Cousins did not miss any time due to injury, keeping Mannion in a similar role to the one he held behind Jared Goff in Los Angeles, but the six-year vet’s presence certainly provided some stability for the Vikings. After both Mond and Cousins missed time due to placement on the reserve/COVID-19 list in August, veteran QB insurance certainly makes sense for the Vikes.

After spending the past two years as Kirk Cousins‘ backup with the Vikings, Sean Mannion has been in free agency for the past four-plus months. The veteran reserve may have a new gig soon.

Mannion worked out for both the Seahawks and Jets this week, according to Sirius XM Radio’s Adam Caplan and ESPN.com’s Adam Schefter (Twitter links). The Jets have both Mannion and Josh Johnson at their facility Thursday. While in New York, Mannion also stopped through the Giants’ facility for a workout, Caplan tweets.

The Giants let Colt McCoy defect to the Cardinals and signed Mike Glennon. The latter has eight years’ experience but has not provided an especially steady hand as a backup, bouncing to four teams over the past four years.

Although the Jets signed No. 2 overall pick Zach Wilson on Thursday afternoon, they have an apparent need for signal-caller depth. Neither of New York’s QB2 candidates — 2020 fourth-round pick James Morgan and former UDFA Mike White — has never taken a regular-season snap. While Mannion has spent his career behind largely durable quarterbacks — Jared Goff in Los Angeles, Cousins in Minnesota — he has six years’ experience and is one of the top QBs left on the market.

Mannion has experience with new Seahawks offensive coordinator Shane Waldron; the duo worked together with the Rams. Waldron served as the Rams’ passing-game coordinator in 2018, Mannion’s final year with the team. The Vikings moved on from Mannion this offseason and drafted Kellen Mond in the third round. The Seahawks re-signed Geno Smith, who has been Russell Wilson‘s backup since 2019, but may be looking for competition.

Johnson has famously been with 14 teams in his lengthy NFL career, which began in 2008. Now 35, Johnson has a key connection to the current Jets staff. He was most recently with the 49ers, who cut him in June. The Jets hired both 49ers DC Robert Saleh and ex-San Francisco passing-game coordinator Mike LaFleur. Johnson’s historic journeyman run included a Jets stopover in 2015. The team cut him after barely a week.