The Colts placed defensive tackle Jihad Ward on the injured reserve list, according to an announcement from the team. To fill his place on the roster, the Colts elevated wide receiver Steve Ishmael from the practice squad. 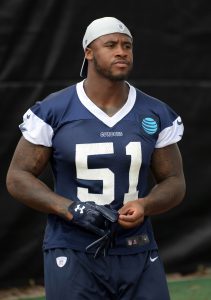 Ward, a 6’5″, 290-pound lineman, saw time in six games for the Colts this year. Unfortunately, a serious ankle injury cut his season short after he tallied a new career high of three sacks.

The former Raiders second-round pick was traded to the Cowboys back in April. However, he failed to make the roster, and he caught on with the Colts practice squad in early September. Days later, he earned a promotion to the varsity squad.

In his limited sample of work this year, Ward gave talent evaluators reason to believe that he can perform at a high level when healthy. Durability remains a concern, but he showed something after losing much of 2017 to a foot ailment.

The Colts announced the signing of the following ten undrafted free agents:

Moore, who seemed likely to be taken during Day 3 of the draft, is the biggest name in this group. Moore led his team in tackles in all four of his seasons (interrupted by a medical redshirt year to rehab from a herniated disk in 2016), but evaluators worried about his lack of size and speed. The slim 6’2″ linebacker will now try to catch on as a reserve behind starters John Simon, Antonio Morrison, and Najee Goode.

The Colts seem well set at kicker with Adam Vinatieri under contract for another season, but Badgley will try to give him a run for his money. At The U, Badgley connected on 79.4% of his field goal tries, including a career-long 57-yarder in 2015.

To help make room for the UDFAs, the Colts released a number of players on Tuesday morning, including running back Matt Jones.