Listed below are all 253 picks of the 2016 NFL draft, broken down by team. You can find a complete breakdown of the draft results by round right here.

Here are the complete 2016 NFL draft results by team:

END_OF_DOCUMENT_TOKEN_TO_BE_REPLACED

The Cowboys reportedly made an effort to trade back into the first round to take a shot at drafting quarterback Paxton Lynch, and though the club ultimately stayed put, Jerry Jones conveyed regret that Dallas didn’t make the deal. “I probably should have overpaid,” says Jones, according to Drew Davidson of the Fort Worth Star Telegram (Twitter link).

The Browns reportedly did not promise a starting job to Robert Griffin III, and it sound as though rookie third-round pick Cody Kessler has a shot to win the quarterback job in Cleveland. “We truly believe in competition here,” Browns executive Sashi Brown said, according to Mary Kay Cabot of Cleveland.com. “We’re realistic about where our roster is at that slot and we want to find a long-term answer. I think it’s as critical for everything we’re going to do here.”

Here’s the latest from the North divisions…

The Eagles haven’t had any contact with Sam Bradford since the quarterback requested a trade, as head coach Doug Pederson tells Jeff McLane of the Philadelphia Inquirer (Twitter link). Bradford, of course, asked out Philadelphia when it became clear that the Eagles would be drafting QB Carson Wentz No.2 overall. Even after the Broncos selected Paxton Lynch — a choice that seemingly knocked Denver out the veteran quarterback market — the Eagles still have yet to hear from Bradford, per McLane.

Here’s the latest out of Philadelphia…

The Rams are expected to pick up their 2017 fifth-year option for wide receiver Tavon Austin, but Los Angeles hopes to sign Austin to a long-term extension before the ’17 season rolls around, per Nick Wagoner of ESPN.com (Twitter link). We heard in February that the Rams are intent on extending both Austin and linebacker Alec Ogletree. Bookmark our 2017 Fifth-Year Option tracker.

The draft is still dominating today’s coverage, but life goes on the NFL world. Let’s dive into some more notes from the NFL’s two West divisions…

7:19pm: Hoyer’s one-year deal is worth $2MM, according to Ian Rapoport of NFL.com (Twitter link).

6:18pm: The Bears have agreed to sign quarterback Brian Hoyer, according to Jason La Canfora of CBSSports.com (Twitter link). A report earlier this week indicated that Hoyer was likely to wait until after the draft to find a new home, and it appears he’s done just that, agreeing to terms with Chicago less than an hour after the conclusion of the draft. It’ll be a one-year pact for Hoyer, tweets Aaron Wilson of the Houston Chronicle. 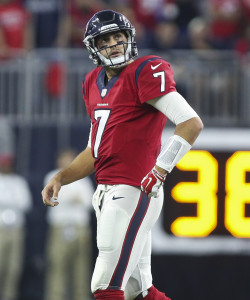 Hoyer didn’t want for suitors after he was released by the Texans earlier this month, as both the Broncos and Jets expressed interest in adding Hoyer to their respective quarterback rooms. Hoyer took visits with both clubs, but both Denver and New York drafted quarterbacks — Paxton Lynch and Christian Hackenberg, respectively — in the first two rounds of the draft. As Ian Rapoport of NFL.com notes (Twitter link), Hoyer and his camp were waiting for the Broncos’ and Jets’ QB situations to clear up before deciding where to sign. New York, in fact, was not in the mix for Hoyer as he neared a final decision, tweets Rich Cimini of ESPN.com.

The Bears signing of Hoyer doesn’t come completely out of left field, as a report earlier this month linked the 30-year-old signal-caller to Chicago. The Bears, in fact, were one of three clubs that had offers out to Hoyer, joining the Steelers and Cowboys as a team that had interest in adding Hoyer as a backup quarterback. Hoyer will head to Windy City to back up Jay Cutler, and he’ll reunite with Bears offensive coordinator Dowell Loggains, who was the Browns’ QB coach when Hoyer started 13 games in 2014.

Hoyer posted the best season of his career in 2015, completing 60% of his passes for more than 2,600 yards while throwing 19 touchdowns against just seven interceptions. After leading the Texans to a 5-4 record in his nine starts, Hoyer’s streak of good play ended in the first round of the playoffs, when he threw four interceptions as Houston was shut out by the Chiefs.

As soon as the seventh round came to a close, NFL clubs immediately begin placing calls in attempts to sign undrafted free agents. While we will be sharing that information eventually, the sudden flurry of activity makes it difficult to track in real time. As such, we’ll wait until teams formally announce their UDFA signings before we post the news (along with accompanying signing bonuses).

After selecting a punter in the sixth round of the draft, Chargers general manager Tom Telesco says he called veteran punter Mike Scifres to tell him that he’s being released, according to Michael Gehlken of the San Diego Union-Tribune (Twitter link). 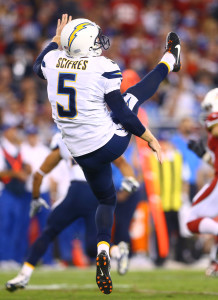 “He’s a true pro,” said Chargers head coach Mike McCoy. “When people ask what it means to be a Charger, I’ll point to Mike Scifres. Thank you Mike. We’re going to miss you.”

San Diego drafted Texas A&M punter Drew Kaser in the sixth round earlier tonight, so it’s no surprise that Scifres is being cut, given that a club that invests any draft pick in a specialist is likely doing so with the intent of said player making the 53-man roster. Scifres, 35, had been with the Chargers since 2004, having spent his entire 13-year career with San Diego. He suffered a down year in 2015, ranking just 29th in net punting average, but with his record of consistency, Scifres should be able to find a new home before or during training camp.

Scifres was entering the final year of his deal with the Chargers, and was set count for $4.163MM on their 2016 cap. By releasing him, San Diego will clear Scifres’ base salary off its books, leaving the club with just $600k in dead money.

Scifres’ agent said last fall that his client does not plan on retiring any time soon, so unless his plans have changed since that time, Scifres should be on the lookout for a new punting gig.