The 2020 NFL Draft just picked up another top prospect. Georgia offensive tackle Andrew Thomas will forego his final season of college eligibility and enter the draft, he announced on Twitter. 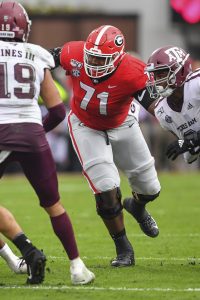 Thomas is considered a surefire first-round pick, and is regarded by many as a potential top-ten selection. Viewed by many as the top offensive line prospect in the draft, there are many teams that could use his services. Fellow top offensive line prospect Mekhi Becton declared for the draft yesterday. Thomas announced that he won’t be playing in the Sugar Bowl, so he’ll begin preparing for the draft immediately.

Thomas became an instant starter as a true freshman with the Bulldogs and never looked back, racking up countless accolades along the way. He won the SEC’s Jacobs Blocking Trophy for being the conference’s best blocker, and was also a first-team All-SEC selection. The Jets are one of several teams in need of a new left tackle, and Rich Cimini of ESPN.com tweets that “there will be a lot of chatter over the next four months about Thomas and the Jets.”