Aside from Anthony Castonzo and Ryan Kelly, the Colts will deploy a retooled offensive line this season. They added some new parts by way of draft picks and free agents but are attempting an experiment at right tackle. Second-round guard Braden Smith has worked at right tackle this week, Zak Keefer of the Indianapolis Star notes.

This may spell trouble for Austin Howard’s chances of making the roster, with Keefer adding Indy brass is “clearly” not high on the veteran signing right now. The Colts are as of now slotting Matt Slauson at right guard, and with Smith previously serving as the free agent addition’s backup there, the team is trying him out on the outside — where less competition appears to exist.

The Colts have signed second round pick Braden Smith, according to a team announcement. With that signing, the Colts have now formally inked ten of their eleven draft picks. 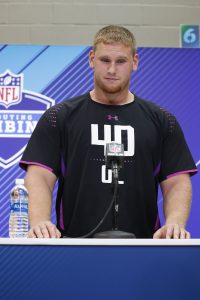 Smith, a 6’6″ guard, was taken with the No. 37 overall pick. The Auburn product earned All-America honors in each of his final two seasons and won the 2017 SEC Jacobs Blocking Trophy, given to the conference’s best blocker.

Second round pick Darius Leonard stands as the Colts’ last straggler in this year’s class. Although the deal is taking a while, Stephen Holder of the Indy Star (on Twitter) has not received word of any major holdup. Leonard and 49ers wide receiver Dante Pettis stand as the final two unsigned second-round picks in the NFL.