Titans edge rusher Bud Dupree has been charged with misdemeanor assault, per an announcement from the Metropolitan Nashville Police Department. According to the report, Dupree was arrested following an altercation with a 20-year-old Walgreens employee.

Dupree, per the MNPD, got into a verbal spat with the Walgreens worker, left, and reentered the store with others. At that point, things got physical, resulting in an “assault-fear of bodily injury” charge for the outside linebacker.

Dupree, 28, is scheduled report for booking in three weeks. Meanwhile, the Titans are busy preparing for the Texans on Sunday with an opportunity to secure a first-round bye.

Dupree just came off of IR this past weekend after missing the last three games with an abdominal injury. So far, he has seven stops and one sack through seven games. Of course, he’s been a much more disruptive force in the past, including 2019 and 2020 when he tallied 19.5 sacks in total.

There’s no word yet from the league, but Dupree could be subject to discipline, pending investigations from the police and the NFL.

Dupree has missed the last three games with an abdominal injury. Although it was a less serious malady that the ACL tear that capped his 2020 season, it was frustrating nonetheless. Dupree, who tallied 19.5 sacks between 2019 and 2020, has collected just seven stops and one sack through seven games for the Titans this year. Still, he should provide a significant boost to a defense that’s currently fighting for playoff positioning, especially when he gets an opportunity to play against his former team, the Steelers, tomorrow.

Carter is an undrafted rookie out of LSU, but he’s managed to see time in eight games (two starts) this season. The majority of his snaps have come on special teams, although he did see time in a season-high 20 offensive snaps during the Titans’ Week 12 loss to the Patriots.

As Tennessee gets ready for their showdown with the Steelers tomorrow, the team made some additional moves to their roster. The team promoted wideout Cody Hollister, offensive lineman Daniel Munyer, and defensive lineman Kevin Strong from their practice squad.

The Titans have designated outside linebacker Bud Dupree to return from the injured reserve list, per a club announcement. This will trigger a 21-day window for Dupree to return to the active roster.

Dupree has missed the last three games with an abdominal injury. Although it was a less serious malady that the ACL tear that capped his 2020 season, it was frustrating nonetheless. Combined with Caleb Farley‘s season-ending ACL tear and injuries to Derrick Henry and Julio Jones, the Titans have been playing at half-strength.

Still, they’ve effectively sewn up the AFC South with a 9-4 record and they’re still in the mix for the conference crown. Dupree, who tallied 19.5 sacks between 2019 and 2020, should go a long way towards helping that effort. To date, he’s got just seven stops and one sack through seven games for the Titans. They’re expected better results from here on out as he plays on his five-year, $82.5MM deal.

It remains to be seen whether Dupree will be cleared this week. But, if he’s able to go, he’ll return against his former team on Sunday.

Injuries are stacking up in Tennessee. Bud Dupree will head to IR for a second straight November. This year, the veteran pass rusher is battling an abdominal injury. He must miss three games because of this transaction.

This is not expected to be a long-term injury, with Ian Rapoport noting (via Twitter) Dupree should be back after the three-game minimum.

While this is obviously a better outlook for Dupree than last November, when he suffered a torn ACL, this extends a run of injury misfortune for the team atop the AFC. The Titans now have Dupree, Derrick Henry, Julio Jones and first-round pick Caleb Farley on IR.

Dupree has already missed three games this season, with those absences coming earlier in the year. The former Steelers first-round pick has just one sack and seven tackles in his seven-game Titans tenure thus far.

Despite the knee injury and offseason rehab, the Titans gave Dupree a five-year, $82.5MM contract in March. Tennessee has missed on a few edge rushers in recent years, with Cameron Wake, Jadeveon Clowney and Vic Beasley not contributing much to the cause. However, homegrown standouts Harold Landry and Jeffery Simmons have done well to prop up an improved Titans defense this season.

No Timetable For Bud Dupree’s Return

The Titans were among the worst teams in the league in terms of pressuring opposing quarterbacks in 2020, and to address those concerns, the team made an aggressive push for former Steelers edge defender Bud Dupree. Dupree ultimately signed a five-year, $82MM pact with Tennessee, a deal that included $34MM in guaranteed money and that raised a few eyebrows throughout the league. 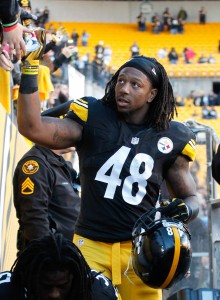 After all, Dupree suffered an ACL tear in December that cut short his 2020 campaign and left his status for the upcoming season a little uncertain. Obviously, the Titans would not have made the kind of commitment they did if they were overly concerned about his prognosis, but we haven’t heard much news of any kind since he put pen to paper.

In an interview on the NFL Network today (h/t Charean Williams of Pro Football Talk), Dupree discussed the work he’s putting in, but he was unable to say when he might join his new teammates on the field.

“Just training hard every day right now, man,” he said. “ACL recovery, rehab, I mean, it’s been one of the most progress [sic] things I have dealt with so far. Each week you see different levels of progress. You see different things change in your body. So I’m working hard to be back as soon as I can, but that’s up to the coaching staff at the end of the day, like when they want me to be on the field and how comfortable they feel with me coming off the injury.”

Prior to the ACL tear, Dupree posted eight sacks in just 11 games, putting him on pace to match the 11.5 sacks he accumulated over a full season of work in 2019. Pro Football Focus assigned him a mediocre 60.2 overall grade last year, but he scored a much higher 77.7 mark in his 2019 breakout, which positioned him as the 23rd-best edge defender out of 104 qualifiers. If the Titans can get a little more out of their pass rush this season — and a healthy Dupree will go a long way towards that goal — they will be a threat to make a deep postseason run.

Thursday, 9:35pm: Dupree got a whopping five-year deal from Titans worth $82MM, including $34MM guaranteed (via Ben Volin of the Boston Globe on Twitter).

Monday, 7:39pm: The Titans’ pursuit of Dupree will produce a contract agreement. Dupree will sign with Tennessee, Pelissero and Ian Rapoport of NFL.com report (on Twitter). While the terms are not fully known, Rapoport tweets the former Steelers sack artist will receive $16.5MM annually on a multiyear deal.

7:14pm: In need of pass-rushing help, the Titans have identified a target. They are going after longtime Steelers edge defender Dupree, with NFL.com’s Mike Garafolo and Tom Pelissero reporting (via Twitter) Tennessee is making a strong push for the five-year vet.

The edge rusher market, deeper than in recent years, is moving fast. Leonard Floyd, Matt Judon and Yannick Ngakoue have chosen teams. The Titans are trying to close out a deal to take another outside pressure artist off the board.

The Browns are also in the mix for Dupree, per Jason La Canfora of CBS Sports (on Twitter). However, some in the Steelers organization expect Dupree to end up with the Titans.

Dupree’s deal will be interesting; he is still rehabbing from the ACL tear he suffered late in the regular season. The Steelers are not expected to re-sign the former first-round pick. They used their franchise tag on Dupree last season, and he has become a key part of a pass rush that has led the NFL in sacks from 2017-20. Dupree broke through in his initial contract year, registering 11.5 sacks in 2019. The Steelers saw the Kentucky alum post eight sacks in 11 games, but the knee injury will affect his market.

Missing out on J.J. Watt, the Browns may need to strike quickly on the edge rusher front. They have been rumored for weeks to be prepared to sign a big-name bookend for Myles Garrett. While the Browns have been connected to Von Miller, with the Broncos’ option decision on the future Hall of Famer still undetermined, but the free agent group is thinning.

Tennessee posted one of the worst third-down defensive efforts in modern NFL history last season, and GM Jon Robinson’s additions of Jadeveon Clowney and Vic Beasley failed. Dupree would represent a gamble, given his injury and inconsistency, but the Titans need to add help here to team with Harold Landry. Tennessee already agreed to terms with D-lineman Denico Autry; a Dupree add as well would help Landry and Jeffrey Simmons considerably.