Falcons wide receiver Calvin Ridley will be shut down for the rest of the season, as Ridley himself announced on Instagram. The second-year wideout sustained an abdominal injury during the third quarter of Atlanta’s win over the Panthers on Sunday, and he did not return to the game. 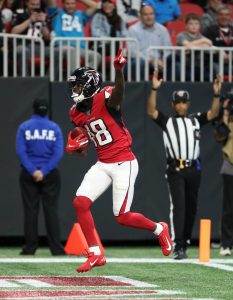 Obviously, the 4-9 Falcons have been out of playoff contention for some time, so it makes sense for the club to play it safe with Ridley, who followed up a strong rookie campaign in 2018 with an even better sophomore effort. After catching 64 passes for 821 yards and 10 TDs in 2018, Ridley reeled in 63 receptions for 866 yards and seven scores in three fewer games in 2019.

Ridley, whom the Falcons selected with the No. 26 overall pick of the 2018 draft, was considered the most polished receiver in his class. He has more than lived up to that billing and has shown a nose for the endzone, and while the Falcons as a whole have disappointed over the past two years, Ridley has been a bright spot.

Since trading Mohamed Sanu to the Patriots in October, the Falcons have given opportunities to a number of younger receivers. With Ridley out of the picture for the remainder of the year, players like Russell Gage, Christian Blake, and Olamide Zaccheaus will have more chances to shine.

The overwhelming majority of this year’s NFL draft picks have signed their rookies deals. As training camp gets started, only the following seven players are without contracts:

For Mayfield, Darnold, Ward, Allen, and Smith, the holdup is reportedly tied to offset language. Players with offset language who are cut before the end of their rookie contract have the remaining guaranteed money reduced by whatever they earns elsewhere. Without offset language, players get to double dip. Top 10 picks expect to complete their rookie contracts, but it’s an important issue for agents nonetheless. There’s no sign of real acrimony between any of the Top 10 picks and their respective teams, though Smith has been staying away from the Bears.

In Edmunds’ case, it’s likely that his agent is haggling over guarantees in the fourth year of his rookie contract. First-rounders selected near the end of the first round often don’t get the entirety of their fourth season base salary guaranteed, but that’s an area where agents can press for a bit extra in talks. Seahawks rookie running back Rashaad Penny took less in fourth-year guarantees than last year’s No. 27 overall pick, talks dragged for several other players near the back end of the round. Others, such as Falcons wide receiver Calvin Ridley and Jaguars defensive tackle Taven Bryan have signed, but the Virginia Tech product is still in limbo.

Pettis is believed to be in line for a significant role this season, so it would behoove the Niners to get a deal done sooner rather than later.

Who says nothing happens in the NFL on the Fourth of July? On Wednesday morning, Calvin Ridley‘s agents took to Twitter to announce that the wide receiver has signed his rookie deal with the Falcons. Ridley, selected with the No. 26 overall pick, has received a four-year, $10.9MM deal, as dictated by his slot. 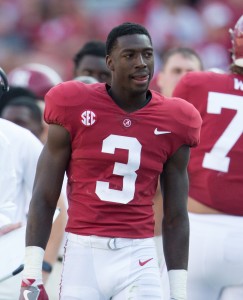 First-round picks have been slower to sign that the rest of this year’s selections, including those taken near the end of the first round. That’s because Seahawks rookie running back Rashaad Penny agreed to a lower fourth season salary guarantee than last year’s No. 27 overall pick, Bills cornerback Tre’Davious White. Those selected near the end of the first round often don’t get the entirety of their fourth season base salary guaranteed, but agents can push for a decent chunk of it to be guaranteed. Penny’s reps apparently settled for less, which may have emboldened teams near the back of the order.

Apparently, the Falcons and Ridley’s camp were able to meet somewhere in the middle. Both sides are hoping that minutia like Ridley’s guarantee in 2021 and the offset language contained in the deal will be a non-factor.

Ridley joins a loaded Falcons offense as he slots behind Julio Jones and Mohamed Sanu. After racking up 224 passes for 2,781 yards and 19 touchdowns at Alabama, the Falcons believe that Ridley will be able to hit the ground running in 2018.

“What I’ve seen is excellent transition in and out of breaks, it’s as good as anybody I’ve been around,” quarterback Matt Ryan said recently. “He’s got very good hands. He’s smart, we put a lot on these guys early in OTAs as far as knowing different positions, knowing where to line up, different route combinations, adjustments that we have versus certain coverages. He’s picked up all that stuff really well. You can tell he’s been well coached prior to coming into the NFL.”

Only six percent of 2018 NFL draft picks remain unsigned, and 71% (12-of-17) of those contract-less selections are first-rounders. For a certain slice of those unsigned first-round picks, especially those selected near the back end of Day 1, Seahawks rookie running back Rashaad Penny‘s contract is playing a role in negotiations, as Mike Florio of Pro Football Talk explains. 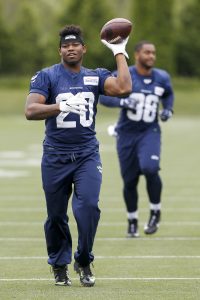 The NFL’s new collective bargaining agreement implemented slotted rookie contracts which make negotiations a breeze, but there’s a still a bit of wiggle room. First-rounders selected near the end of the first round won’t often get the entirety of their fourth season base salary guaranteed, but that’s an area where agents can press for a bit extra in talks. Penny’s representatives, clearly, didn’t do so, which could now lead other teams with unsigned first-round picks to withhold guarantees.

Here are the unsigned first-round picks chosen after No. 20 overall:

Overall, the amount of fourth season guarantees shouldn’t stand in the way of getting deals for the above players done, as the dollar amounts in question are in the thousands, not millions. But the lack of signed contracts does speak to the small area of available negotiation still left in rookie pacts, and is something to watch as the offseason progresses.

Have pre-draft workouts gotten out of control? Many in the football world believe that is the case, Albert Breer of The MMQB writes.

“I worked out a guy who was dead because he got smoked by the team that worked him out two days before,” said one NFC assistant coach. “I had some questions about his toughness coming in, but I had to give him a pass on the whole thing. And it’s on the coaches for doing that.”

After a workout season that saw Wisconsin cornerback Nick Nelson tear his meniscus while working out for the Lions and N.C. State defensive tackle Kentavius Street tear his ACL while with the Giants, it may be time to bring some reform to the way teams conduct auditions with prospects.

LSU running back Derrius Guice has changed representation, going from the firm that represents rap star Kendrick Lamar to one headed up by Lil Wayne, as Darren Heitner of Forbes Magazine writes. Guice is the latest draft prospect to join Young Money APAA Sports, which also represents Texas linebacker Malik Jefferson. Thanks to a buyout of another firm late last year, the agency also has NFL players Devin McCourty, Duron Harmon, Lane Johnson, Jason McCourty and Seth Roberts in its stable. 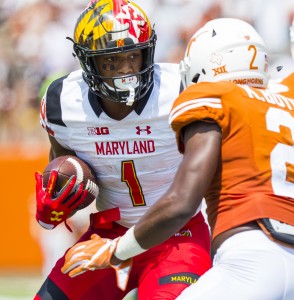 Calvin Ridley is going pro. The Alabama wide receiver announced on social media that he is entering the NFL Draft. 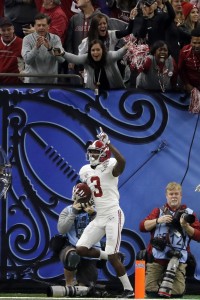 It is expected that Ridley will be the first wide receiver off the board in this year’s draft, though SMU’s Courtland Sutton and Oklahoma State’s James Washington could give him a run for his money. The Bears, who pick at No. 8 overall, are in need of a receiver and could have interest.

Ridley’s numbers have declined since his breakout freshman campaign, but that can be largely attributed to Alabama’s focus on the running game. This past season, Ridley had 63 catches for 967 yards and five touchdowns, but his 15.3 yards per reception average was a collegiate career best.

Riding the momentum of a National Championship, Ridley could become the latest Alabama receiving threat to go high in the draft, following the footsteps of Julio Jones and O.J. Howard.