The Colts have jumped out to an early lead in draft pick signings. They agreed to terms with five draftees Thursday, including their top two picks — defensive linemen Kwity Paye and Dayo Odeyingbo.

Chosen 21st overall, Paye will be expected to play a key role for the Colts as a rookie. The team entered the draft with a significant edge rusher need, and the Michigan product was viewed as one of the top outside pressure artists available. Paye ranked as Scouts Inc.’s top pass-rushing prospect in this year’s draft, and for good reason. This was thanks in part to a 2019 campaign where the Michigan product finished with 6.5 sacks and 12.5 tackles for loss.

While this was not viewed as a strong D-line draft class, the Colts have not re-signed Justin Houston and did not have a steady edge presence opposite him in 2020. The team doubled up at this position group to start the weekend. Chosen 54th overall out of Vanderbilt, Odeyingbo may profile as a player who operates both outside and inside — perhaps similar to Denico Autry, who departed for Tennessee in free agency. Odeyingbo, however, qualifies as a project. He may miss his rookie season, having suffered an Achilles’ tendon tear in January while training for the draft. 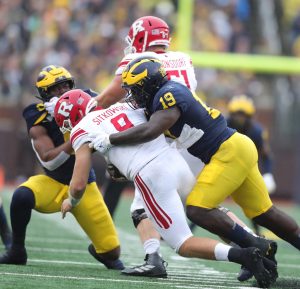 Paye ranked as Scouts Inc.’s top pass-rushing prospect in this year’s draft, and for good reason. This was thanks in part to a 2019 campaign where the Michigan product finished with 6.5 sacks and 12.5 tackles for loss. That performance earned him second-team All-Big Ten honors and put him on the NFL radar.

The 6-foot-4, 272-pound defensive linemen managed to repeat that production in 2020 (two sacks, four tackles for loss in four games), and he earned a second-team All-Big Ten nod at the end of the season. Paye had emerged as a favorite among teams seeking pass-rush help, with the Giants being among the teams that had been connected to the prospect during the pre-draft process. The defensive lineman has been described as “raw” by some analysts, but his upside makes him an intriguing selection.

Giants Leaning Toward Edge Rusher In Round 1?

Having needed an edge rusher for a few years now, the Giants may be set to address this need with their top offseason resource.

They have done a lot of work on the top edge defenders in this year’s draft, and sources informed SNY’s Ralph Vacchiano the current sense is this will be the direction the team takes with its No. 11 overall pick. The Giants have spent big to fill needs at wide receiver and cornerback, in adding Kenny Golladay and Adoree’ Jackson, but have lacked a long-term, starter-caliber edge rusher since trading Olivier Vernon in 2019.

The Giants could be faced with a major decision — not exactly uncommon for them in recent drafts — if Alabama wide receiver prospects DeVonta Smith and Jaylen Waddle remain on the board. Five quarterbacks may well go in the top 10, pushing down this offense-heavy draft’s top non-QB talents. The Giants have Golladay, Sterling Shepard and Darius Slayton penciled in as their top three receivers, but it should not be considered a lock the team would pass on potential value here in one of the ex-Crimson Tide stars.

New York is believed to be high on Michigan’s Kwity Paye and Georgia’s Azeez Ojulari, Vacchiano adds. The former ranks as Scouts Inc.’s top draft’s top pass-rushing prospect. With Ojulari ranked outside the top 20 overall, it may be difficult to envision the Giants going in that direction over a higher-value player at 11. Mel Kiper Jr.’s most recent mock has the Giants taking Waddle. A trade-down maneuver seems unlikely, given that GM Dave Gettleman‘s streak of never trading down has now lasted eight drafts — five in Carolina, three with New York.

Should the Giants stay at 11, they are also high on Northwestern tackle Rashawn Slater, per Vacchiano. The Giants went tackle at No. 4 overall last year and used a third-round pick on tackle Matt Peart. Nate Solder is also in line to return.

The Giants pursued Leonard Floyd, but he re-signed with the Rams. They passed on the rest of the 2020 pass rusher lot, which was rather crowded for the big-ticket position, and only kept Markus Golden via the rarely used UFA tender last year. The Giants waited until Round 7 to draft a pass rusher in 2020 and have since traded Golden and let 2020 signing Kyler Fackrell sign with the Chargers.

Gettleman passed on edge talent Josh Allen in 2019, drafting Daniel Jones instead and lost out on Chase Young thanks to a late-season win over Washington in 2019. The Giants’ need at outside linebacker has persisted, though the emergence of Leonard Williams as a sack artist may lessen the desperation at this spot to some degree.