Mike DeVito would have given strong consideration to playing another season in 2016 were it not for his family’s concern, the former Chiefs and Jets defensive end said on a Sirius XM Radio appearance with Alex Marvez and Rick Neuheisel on Sunday (Facebook link). The increasing data emerging on concussions led to DeVito making the decision to retire after nine seasons in April.

DeVito’s third season with the Chiefs brought two concussions, with those coming after he suffered a season-ending Achilles tear in Week 1 of the 2014 campaign.

“You see the new data coming out. That really changes who you are as a person. So it was a tough sell to my wife and, obviously, she’s a higher priority to me than football is. It made the decision easy, but it still was difficult,” the 32-year-old DeVito said.

DeVito enjoyed a solid 2013 season but couldn’t recapture his starting position full-time after the emergence of Jaye Howard, whom the Chiefs chose to re-sign during an offseason when both he and DeVito resided as UFAs. Although the Chiefs were reportedly interested in retaining DeVito, they moved on after he retired and drafted Chris Jones in the second round.

Veteran defensive lineman Mike DeVito has decided to call it a career after nine NFL seasons. DeVito made the announcement in a story for The Drive, going into some detail about his own history with football, including the years before he became an NFL player. 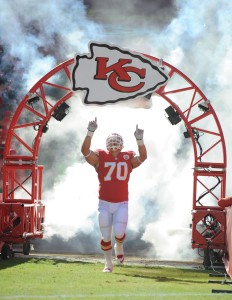 “I want to thank the New York Jets, the Kansas City Chiefs and all the amazing people I have met throughout my career,” DeVito wrote at the end of his piece. “To all my family, friends, and fans, thank you for making an average player feel like a Hall of Famer. And to the game of football, thank you for the past 18 years, all the memories, and the lessons that will continue to serve me for the rest of my life.”

An undrafted free agent out of Maine, DeVito caught on with the Jets for the 2007 season, and ultimately played 82 regular season games (38 starts) for Gang Green over the next six seasons.

The veteran defender joined the Chiefs in 2013, and has spent the last three years in Kansas City. In 2015, he established a new career high by picking up three sacks in a part-time role. For his career, he totaled 110 regular season games (57 starts) and played in another nine postseason games, including two this year with the Chiefs.

DeVito, who turns 32 in June, had seen his contract with the Chiefs expire last month, so his decision to retire won’t have an impact on Kansas City’s cap. And if he does have a change of heart at any point, DeVito would be free to sign with any team.

Last offseason was a busy one for the Colts, as the organization spent big money to secure veterans like Andre Johnson, Frank Gore, Trent Cole and Kendall Langford. As Stephen Holder of the Indy Star writes, we may be seeing a different strategy this time around.

Colts general manager Ryan Grigson told reporters that the team won’t be as aggressive on the free agent market this offseason.

“I would say this year is a little different than in years past just because of some of the financials we have on the horizon,” Grigson said. “Somewhat like 2012, where we tightened our belt.”

Holder attributes part of that strategy to Andrew Luck‘s inevitable contract extension, but he also notes that many of the team’s recent free agent acquisitions haven’t necessarily worked out.

Let’s look at some of the news coming out of the AFC as Week 6’s late-afternoon games wind down.

DeVito agreed to reduced his $3.75MM base salary and $250K workout bonus to a base salary of $870K (fully guaranteed) and a signing bonus of $300K. He also has a $30K workout bonus, which effectively gives him $1.2MM guaranteed. The veteran can earn another $300K in per-game roster bonuses, for every game on which he’s a member of the 53-man roster. The deal also includes $1.2MM in incentives based on playing time and whether the team makes it to the playoffs.

The deal reduces DeVito’s 2015 $5.4MM cap number to a much more palatable $2.9MM, creating $2.5MM in cap space for KC. DeVito suffered a torn Achilles tendon in Week One of the 2014 season, ending his season before it really began.

While hundreds of NFL writers will submit mock drafts within the next two months, few are more plugged in than Peter King of TheMMQB.com, whose first mock draft of the year lends credence to the idea that the Eagles have real interest in Marcus Mariota. King’s mock has the Eagles pulling off a trade with Washington to move up to the No. 5 spot and nab Mariota — Philadelphia gives up its first- and second-round picks this year, along with its first- and fourth-round picks for 2016, in the hypothetical swap.

Here’s more miscellany from around the NFL:

It’s Saturday, and that means ESPN.com’s NFL writers are opening their mailbags and answering questions from readers. Let’s start off the morning by checking out some notes from the AFC…

Poll: Which Injury Will Have The Most Impact?

As the first Sunday of NFL football of the 2014 season comes to a close, coming away with a win was an important goal for every NFL team. A not-too-distant second was escaping healthy, as the Panthers confirmed by holding Cam Newton out of the opener. For as crucial as starting the season off with a victory is, the long-term health of the roster is as important for teams keying in on a playoff run.

However, the cliché is that the NFL is a war of attrition, and a few teams have already been bit by the injury bug before the first game was over. Bengals’ tight end Tyler Eifert suffered an elbow injury that knocked him our of the game and could be headed to the IR, albeit with designation for return.

The Chiefs lost two member of their starting defense today, with both linebacker Derrick Johnson and defensive lineman Mike DeVito both rupturing their achilles in a 26-10 loss to the Titans. The team will likely be without each player for the remainder of the season. Injuries to pass rushers Tamba Hali and Justin Houston derailed the defense last season, and after only one week the defense has already taken a big hit.

Evan Mathis has been one of the best offensive linemen in the NFL since arriving in Philadelphia in 2011. A major driving force for the Eagles’ prolific ground attack, Mathis went down with a knee injury today against the Jaguars. The team rallied for a comeback victory, but losing their left guard for an extended period of time could make things difficult for the Eagles’ offense.

Possibly the biggest name to leave a game with an injury and unable to return is first-round pick Jadeveon Clowney. Much like Mathis, Clowney suffered a knee injury, and he will miss time early in the Texans’ season. The team is set up to absorb the injury, with players in place to wade the time. However, while he has not proven his worth at the NFL level, his explosiveness and big play ability will be missed. More importantly, when the Texans do need him later in the season he will be behind the learning curve, still acclimating himself to the speed of the league.

For each of these situations, it will depend on how long the players end up out of the lineup. Teams can weather the storm for a time, but an early season injury can be a huge setback for a team with playoff hopes. The Eagles and Bengals both won their divisions in 2013, but both the AFC North and NFC East were expected to be close, with contenders waiting to pounce. The Chiefs were a surprise wild card team in 2013, but primed for regression before the injuries. The Texans missed the playoffs last season, which set them up to take Clowney at the top of the draft. However they were prepared to make it a quick return to the playoffs with the AFC South up for grabs. Each team has seen their postseason hopes grow more difficult with these week one injuries.

Week 1 couldn’t have gone much worse in Kansas City — the Chiefs not only suffered a 26-10 loss at the hands of the Titans, but will likely miss two key defenders for the rest of the season. Linebacker Derrick Johnson and defensive lineman Mike DeVito both ruptured their Achilles tendons, announced head coach Andy Reid (via the team’s Twitter account).

Johnson, 30, leads an Chiefs inside linebacking unit that simply doesn’t have the depth to withstand his absence. Johnson played on 97% of Kansas City’ defensive snaps last season, racking up 95 tackles, 4.5 sacks, and two interceptions. Advanced metrics rated him well, as he graded out as the third-best 3-4 inside linebacker among 55 qualifiers, per Pro Football Focus (subscription required). With Joe Mays having been placed on short-term IR, the Chiefs will turn to Josh Mauga and James-Michael Johnson to hold the fort in the middle of the field.

DeVito’s loss is just as devastating, as the 30-year-old started 13 games last season, finishing with 18 tackles. Like Johnson, DeVito fared well according to PFF, grading as the seventh-best 3-4 defensive end on 446 snaps. The Chiefs have a little more depth along the line than at linebacker, but Vance Walker, Damion Square, and Jaye Howard can’t be expected to match the production of DeVito.

Already expected to regress in 2014, the Chiefs can’t afford to lose players of Johnson and DeVito’s caliber. Kansas City’s defense experienced life without its stars in 2013, as well — the Chiefs ranked 14th in weighted defensive DVOA, which more heavily factors in late-season performance, following injuries to Justin Houston and Tamba Hali (after ranking ninth for the year in total). After accounting for today’s news, and the fact that Brandon Flowers and Tyson Jackson departed over the offseason, 14th is probably the ceiling for the Chiefs’ defensive DVOA performance in 2014.